NYCFC uses dominant second half to ease past Impact 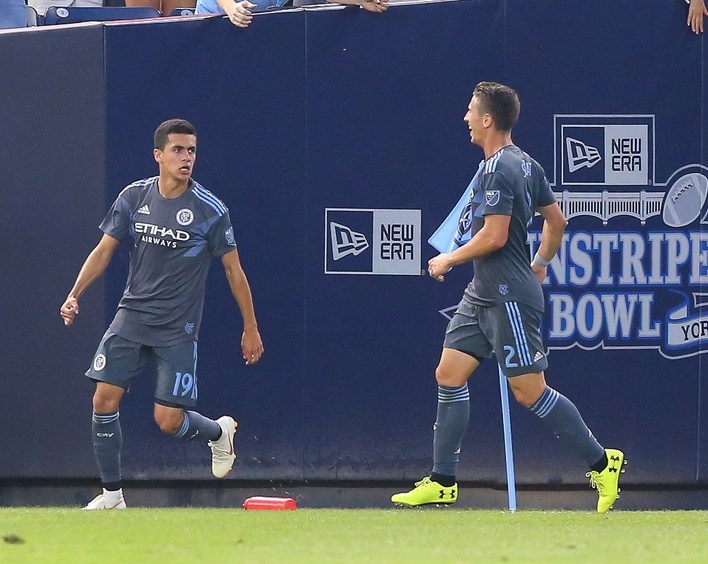 NYCFC may have needed some time to get going on Wednesday against the Montreal Impact, but once they got it together the team rolled their way to three points.

Domenec Torrent’s side used a trio of second-half goals to claim their third consecutive home win in a 3-0 triumph over their Eastern Conference opponents. Jesus Medina, Ronald Matarrita, and Jonathan Lewis all registered goals as NYCFC moved to three points behind conference leaders, Atlanta United.

The hosts were on the front foot from the opening whistle, having a pair of good looks at goal in the first-half. Maxi Moralez and Alex Ring were both kept out by Evan Bush which saw the teams scoreless at halftime.

Medina broke the deadlock in the 60th minute, beating Bush to the bottom-left corner from long-range. The 21-year-old now has three goals this season for his team, and seven points in total. It didn’t take long for NYCFC to ice the result, as they doubled their lead five minutes later.

Matarrita picked up a pass from Medina and slotted nicely past Bush for NYCFC’s second of the match. The defender would remain in the action in his side’s final contribution of the match, crossing to Lewis who headed in for a 3-0 final score.

It was an offensive romp for NYCFC, who had 23 shots in total with seven going on goal. The Impact struggled to get anything going offensively, failing to get any of their three shots on Sean Johnson.

NYCFC (11-4-4) stays at home on Saturday as they welcome the Columbus Crew to town. The Impact (8-12-0) return to Stade Saputo also this weekend for a Saturday date with the San Jose Earthquakes.

Medina was a huge influence in the victory for NYCFC, scoring a goal and registering an assist.

Medina’s opener kicked off the onslaught in the second-half while Matarrita’s goal really iced the result.

Nacho Piatti was surprisingly quiet for the Impact, finishing with only 15 completed passes and zero shots on goal.