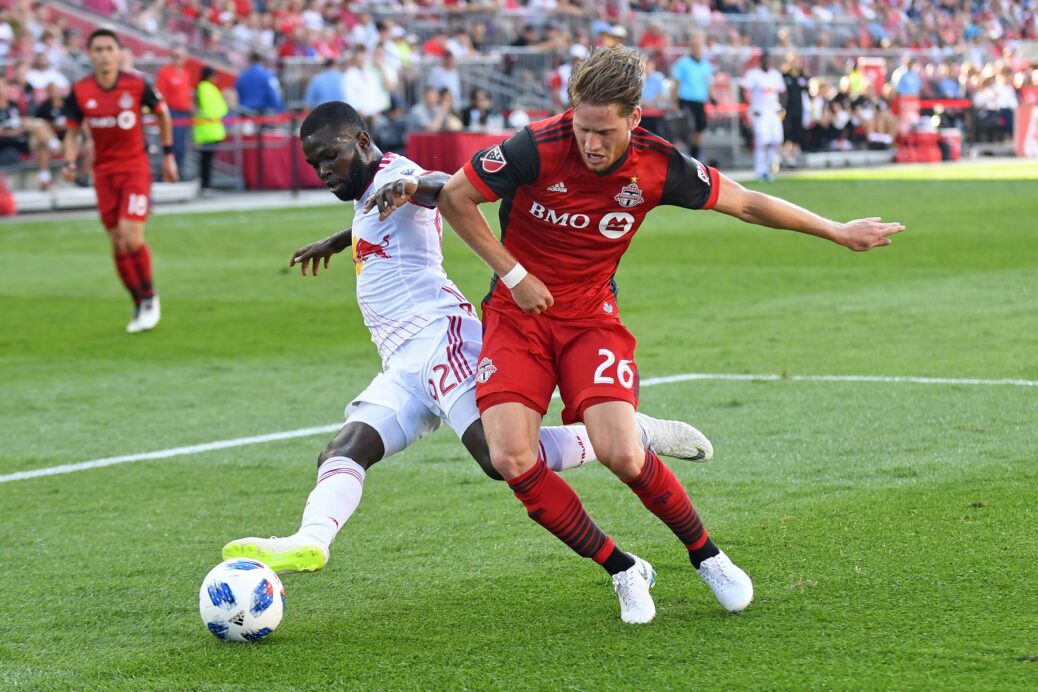 The New York Red Bulls claimed their third consecutive league victory on Sunday with the game winning goal coming from an unfamiliar source.

Kemar Lawrence played the hero for Jesse Marsch’s side, scoring from long-range in the fourth minute to help New York claim a 1-0 win. The Jamaican beat Alex Bono to the bottom-right corner for his second goal of the season. Bono didn’t get a clear look at the shot and was unable to keep it from sliding into the goal.

The Red Bulls were on the back foot for most of the match with goalkeeper Luis Robles being busy in the win.

Michael Bradley was kept out by Robles in the 52nd minute while Marco Delgado also was repelled.

Greg Vanney’s men had a huge chance to level the score late with Red Bulls centerback Tim Parker being whistled for a handball in the 76th minute. However, Robles made his biggest save in the match two minutes later as he dove to his left and saved Sebastian Giovinco’s penalty kick.

Robles finished the match with eight saves to help preserve the clean sheet. It was the second straight clean sheet for New York, who remains in second place on 32 points.

TFC struggles continue in league play, as they dropped their ninth result of the season. Vanney and Co. are on 15 points and in 10th place in the East.

NYRB next travels to Sporting KC on July 8th, while TFC faces a quick turnaround at Minnesota on July 4th.

Lawrence came up big for the second straight match, scoring the winner for the Red Bulls.

Robles’ PK save on Giovinco was huge as it kept his side in front for good.

Giovinco has found it tough to score goals for TFC this season and that trend continued on Sunday.