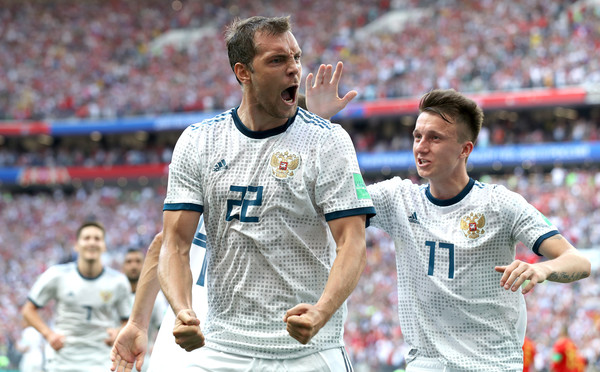 Russia endured 120 minutes of nonstop pressure from Spain to make it to penalty kicks.

Once there, the host nation of the 2018 FIFA World Cup thrived, as Russia defeated Spain 4-3 on penalties thanks to a pair of saves by Igor Akinfeev.

Akinfeev denied Koke in the third round of penalties and won the match with a denial of Iago Aspas with his outstretched foot.

Russia made all four of the penalties it attempted, with Denis Cheryshev’s spot kick ending up as a game-winner.

The game was deadlocked at 1-1 for the second half and extra time despite a wealth of pressure produced by Spain.

Spain took the lead in the 12th minute, as a free kick bounced off the back heel of Sergei Ignashevich and into the right part of the net.

The spot kick was awarded to the host nation after the ball made contact with Gerard Pique’s arm in the box off a corner kick.

To say Spain was the dominant force as the game went on is an understatement, but it was unable to produce anything in front of goal for long stretches.

Andres Iniesta’s late second-half shot was denied by Igor Akinfeev, but that was the most the Spanish could muster.

Thirty minutes of extra time couldn’t separate the sides, as Spain failed to break down the Russian defenses in and around the box.

However, the Spanish were only unable to put nine shots on target.

Russia faces the winner of Croatia-Denmark in the quarterfinals in Sochi.

Igor Akinfeev made two saves in the penalty shootout to extend Russia’s remarkable run into the quarterfinals.

Akinfeev’s shoestring denial of Aspas clinched the unlikely victory for the host nation.

Spain’s forward line was disappointing throughout the contest, with Diego Costa barely showing up. But if we’re being honest, the entire Spanish team didn’t live up to expectations.