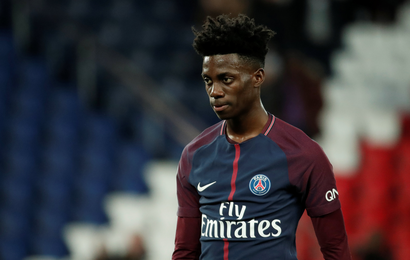 U.S. Men’s National Team forward Timothy Weah has waited for his moment to bag his first senior goal for Paris Saint-Germain. On Saturday, that dream became a reality for the 18-year-old.

Weah scored his first goal for PSG’s senior team in his side’s friendly against Bayern Munich in the International Champions Cup.

A clever through ball pass from Kevin Rimane hit Weah in stride and the forward powered his way into the box. His nice finish got under Sven Ulreich’s arm and into the back of the net which had PSG up 1-0 in the 31st minute.

With many of PSG’s stars away following World Cup duty, Weah has the chance to shine for his team during these friendly matches.

Despite his opener, goals from Javi Martinez and Renato Sanchez had put Bayern ahead in the second-half of the eventual 3-1 win for the German champions.

American defender Chris Richards made his Bayern debut coming on as a 62nd minute substitute for Sandro Wagner.

PSG is next in action on July 28 against Arsenal before a quick turnaround on the 30 against Atletico Madrid.