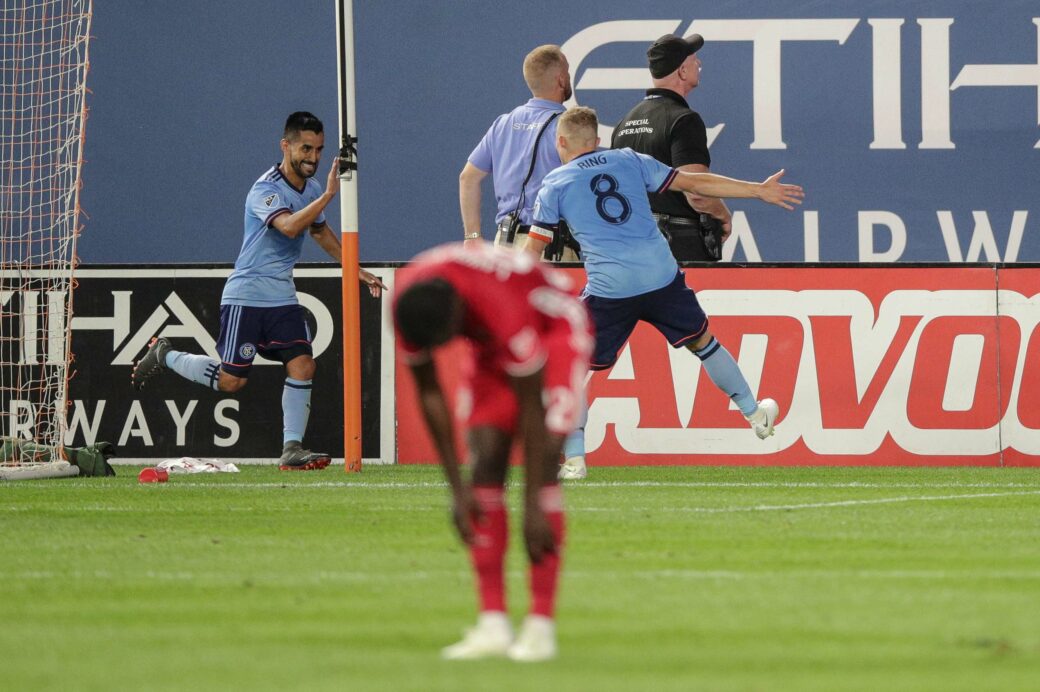 Several times over the last few seasons, New York City FC was exposed by the New York Red Bulls’ high press. At times, it got ugly. Even without taking into account the infamous seven-goal beatdown, NYCFC entered Sunday’s clash on the heels of two straight 4-0 embarrassments at the hands of their local rivals.

Domenec Torrent wasn’t around for those embarrassments and the new NYCFC manager is still finding his own way with his new club. On Sunday, though, Torrent made the adjustments necessary to not just avoid another embarrassment but to also take away a big win over a local rival.

Known for playing out of the back and keeping the ball on the grass as much as possible, Torrent’s NYCFC took a more pragmatic approach on Sunday in a 1-0 win over the Red Bulls. It wasn’t pretty and, for all but one moment, it wasn’t entirely effective. However, NYCFC’s approach helped negate the Red Bulls’ famous high press, a system that has always given NYCFC fits within the tight confines of Yankee Stadium.

“I’m very proud of our players. It wasn’t easy to play in this intensity,” Torrent said. “They played with soul. The most important thing, I’ve said many times, is to play with passion, but a lot of passion maybe is bad. When you lose the ball, the first intention is to go there and they can play and kill us.

“I’m proud of them and they understood this way to play against this type of team when we lost the last two games 4-0 and 4-0. It’s not easy to think about that in your mind. I’m very happy for them because we have to break the streak of losing games and it’s not easy.”

Torrent’s system certainly asked something different of his players. Under Patrick Vieira, NYCFC was determined to play out of the back as the team became one of the premier passing teams in MLS. However, against a team like the Red Bulls, turnovers are deadly, and NYCFC tended to commit those turnovers in spaces that, ultimately, led to goals.

Because of that, Torrent said it was key to “avoid those kinds of accidents”. For Sean Johnson, that meant hitting no-risk long balls when the Red Bulls pressed. For defenders, that meant avoiding the dangerous diagonal balls that tend to be picked off in what turned into an automatic Red Bull counter. For midfielders, it was about playing smart with the ball and not forcing anything that could result in a bad giveaway.

While that approach was effective, it wasn’t pretty. The two teams combined to attempt 696 passes with NYCFC completing 62 percent compared to the Red Bulls’ 58 percent. It was an ugly, disjointed match as NYCFC was content to kick it long while the Red Bulls were repeatedly left frustrated by NYCFC’s numbers behind the ball when they eventually did get it.

“I prefer having the ball all the time and touching the ball 100 times a game. It’s not always possible,” said midfielder Alex Ring. “They play a very intense, high press game. And sometimes you just have to be direct to break that press because otherwise, you’re going to play yourself into trouble. I think we saw that the first two games. And I think we did that better than before, today.”

Eventually, something had to break, and it did. NYCFC switched to a 4-4-2 late as Torrent introduced Jonathan Lewis to bring a bit of speed to the front line. Initially in more of a 4-3-3, Maxi Moralez, who started at forward as a replacement for the injured David Villa, was dropping deep to receive the ball. That was by design as Torrent looked to create four-on-three overloads in the midfield while allowing space for Ismael Tajouri-Shradi and Rodney Wallace on the wings. That didn’t work, and Torrent told Moralez to stay higher up the field to isolate two Red Bulls’ centerbacks and allow the midfield to work.

Lewis’ introduction provided another outlet to overload the backline, and it worked. A turnover from Aaron Long led to Lewis and Moralez combining for the winning goal with less than 10 minutes remaining.

“It was a bit of a weird game,” Johnson said. “The first half really had nothing in it. I think both ways, there was maybe one shot inside the 18. But, it wasn’t that troubling and the first half was just kind of a tactical back and forth – kind of like a chess match.

“The second half, things started picking up a little bit. And I think we had one quick opportunity to finish and we did. I think we did well to move the ball and we stuck to our principles as to what we wanted to – especially against them. So all in all, we executed what we wanted to do today.”

On Sunday, that vision included a different identity for NYCFC, and that helped carry the team to a derby win.

“We have to improve because I like to pass the ball and keep the ball,” Torrent said. “It is not easy to come here after another coach, but the most important thing for me tonight was break the situation against the Red Bulls.”

“This is his third game here,” added defender Ben Sweat. “You know, we’ve touched on a few things, so I think eventually we’ll get a buildup. Obviously he knows how we played with Patrick and obviously he’s been a Man City, Barcelona, Bayern coach. So he wants to play. He wants us to be creative and pick and choose our moments. And I think at the later games, you’ll see us playing more out of the back.