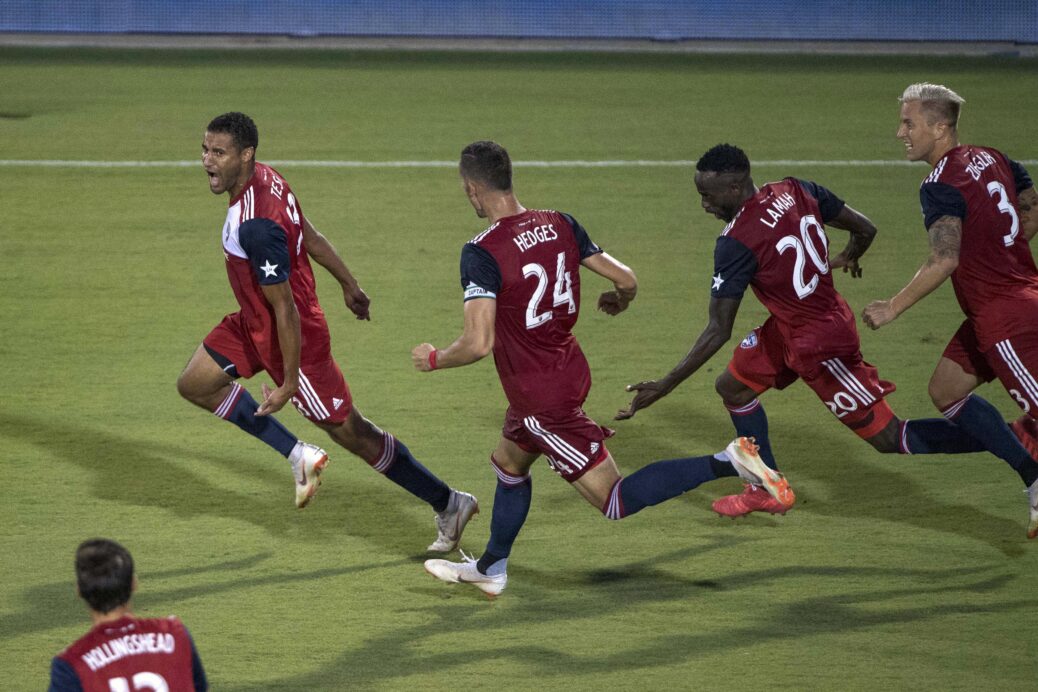 The Fourth of July MLS slate was as hectic as ever with a number of furious comebacks and late goals.

The Houston Dynamo, D.C. United and FC Dallas all put together comebacks on Wednesday, headlining a wild day. It was a day featuring a big hat-trick from a South American star, a stunning late save and setbacks for several of the league’s contenders.

Even without Mauro Diaz, FC Dallas was able to mount a furious comeback in a 3-2 win over one of the league’s top teams.

Tesho Akindele led the charge as FC Dallas erased a 2-1 deficit to win the match. Akindele’s first came in the 86th minute before the forward added a second two minutes later to seal the win.

Reto Ziegler opened the scoring early for Dallas, but Josef Martinez took over with two goals of his own to give Atlanta the lead for a time before Akindele starred in the late comeback.

Man of the Match: Akindele did the damage late to seal a big win for a team that just lost its star.

Moment of the Match: Akindele’s second goal was a worthy winner for a Dallas team that proved it can survive without Diaz.

Match to Forget: Michael Parkhurst’s mistouch in the box opened the door for Akindele to score on the winner, proving a harsh end to the match for Atlanta.

There were goals aplenty in Minnesota United’s 4-3 win over Toronto FC.

Darwin Quintero provided a hat-trick, leading the Loons in the win. The Colombian star opened the scoring in the 58th minute before Miguel Ibarra added a goal of his own moments later. Justin Morrow brought TFC back with a goal just before halftime, but it was Minnesota United that kicked off the second half hot.

Quintero scored in the 52nd minute before completing the Loons’ first MLS hat-trick in the 57th. Sebastian Giovinco and Jordan Hamilton scored to push the score to 4-3, but it wasn’t enough for TFC to earn a road tie in a seven-goal thriller.

Man of the Match: No doubt it’s Quintero, who put together his best MLS performance.

Moment of the Match: The second half surge pushed the Loons too far ahead with Quintero’s hat-trick goal proving too much for TFC.

Match to Forget: TFC was all over the place defensively with Ashtone Morgan in particular struggling to contain the Loons attack.

Will Bruin led the way in a much-needed win for the Sounders.

Bruin scored two goals in the 2-1 win with the first coming int he 19th minute. The Rapids got back into the match just before halftime on a goal from Sam Nicholson, though, giving the hosts momentum heading into the second half.

In the 59th minute, though, Bruin gave the Sounders the lead for good with his second of the day. A spectacular save from Stefan Frei in the 82nd minute prevented a Rapids comeback.

Man of the Match: Bruin’s double led the way for a team that has a difficult time scoring all season.

Moment of the Match: Frei’s stop on Shkelzen Gashi saved the game for the Sounders.

Match to Forget: The Rapids were wildly undisciplined on Wednesday with seven yellow cards. Yannick Boli earned one just before halftime and was subbed out after an indifferent first.

The Dynamo provided the fireworks, stunning LAFC with two stoppage time goals to earn a 2-2 tie.

Latif Blessing scored five minutes in to give LAFC the advantage, which the visitors maintained for a majority of the match. Mark-Anthony Kaye finally gave LAFC the insurance goal they were searching for in the 72nd minute, but it wouldn’t be enough.

Mauro Manotas began the comeback in the 94th minute with a goal that gave the Dynamo hope. Two minutes later, that hope became a draw as Philippe Senderos scored in the sixth minute of stoppage time to steal a point.

Man of the Match: Adama Diaiomande continues to thrive as the forward added two assists on Wednesday.

Moment of the Match: Senderos’ goal was a stunner, and it sealed a crazy point for the home team.

Match to Forget: The Dynamo may have put together a comeback, but Tomas Martinez had a rough game in midfield before departing late in the match.

Despite conceding a 20th minute goal from Daniel Salloi, RSL blitzed Sporting KC to close the first half. Jefferson Savarino scored first in the 29th minute before Corey Baird gave RSL the lead in the 37th. Just before halftime, a third went in as  Sebastian Saucedo scored in stoppage time.

Man of the Match: Saucedo was the best player on the field for RSL, scoring a goal while frustrating Sporting KC all night.

Match to Forget: Corey Baird’s goal was the key for RSL, who scored from a throw-in situation.

Match to Forget: Taking two red cards late is less than ideal for Sporting KC as the team will lose Salloi and Espinoza to suspension.

While D.C. Untied waits for the team’s star to take the field, the LA Galaxy’s big name scored a goal in what ended as a 2-2 draw.

Zlatan Ibrahimovic scored a fifth minute goal for the Galaxy, who jumped ahead, 2-0, 20 minutes later on a finish from Chris Pontinus.

However, just one minute after Pontius scored against his former club, Zoltan Stieber brought one back for D.C. with a goal of his own. Finally, the comeback was completed in the 85th minute on a goal from Darren Mattocks, who is rounding into form with Wayne Rooney’s debut looming.

Man of the Match: Mattocks is heating up at the right time with five goals in six matches.

Moment of the Match: Mattocks was able to weave his way through the Galaxy defense to score a vital late equalizer for D.C., who built a bit of goodwill ahead of Audi Stadium’s first match.

Match to Forget: Perry Kitchen was unable to close down Mattocks on the winner as the Galaxy threw away a lead.