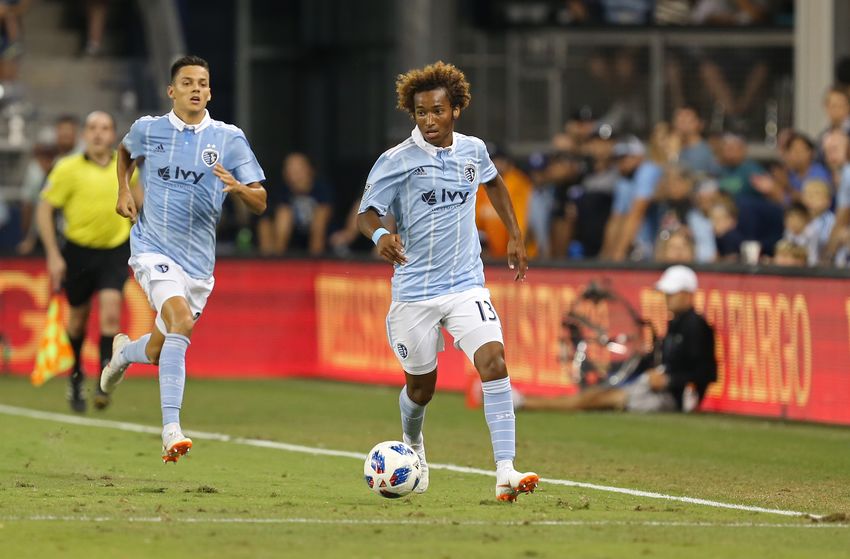 He’s the third youngest player to ever start an MLS game, but you wouldn’t know it by watching his performance against the Houston Dynamo.

16-year-old Gianluca Busio was integral in the two biggest plays of the night in Houston, although for two very different reasons.

In the 14th minute, Busio went up for a header when Dynamo defender Alejandro Fuenmayor came in with a late challenge from behind, leading with his left elbow and smashing into the back of Busio’s head. Referee Chris Penso immediately reached for his back pocket, pulling out a red card and leaving Houston with 10 men.

Sixty minutes later, Busio received a pass from Graham Zusi at the top of the Dynamo’s box. Showing maturity beyond his years, the young Busio cheekily flipped the ball off his first touch over his left shoulder to striker Diego Rubio, who chested it down and slotted it into the bottom left corner of the net, giving Sporting KC what would become the game-winning goal.

The 16-year-old is the second youngest player in MLS history to record an assist.

“I’m just glad I could help the team,” said Busio. “On my first MLS start to get a game winning assist is a really big step for me. It’s a great feeling to help the team win.”

“Busio was the man of the match,” Sporting KC head coach Peter Vermes said. “He played fantastic. For a 16-year-old kid to play the way he did in that game is incredible.”

The homegrown Busio signed his first professional contract with Sporting KC in 2017 at just 15 years of age. The young midfielder continued to play with the SKC academy, waiting to make his professional debut until the 2018 season with Sporting’s USL team, the Swope Park Rangers.

As fate would have it, Busio also had the assist on the game-winning goal in his first start with SPR.

“It was big for him. I thought he played well,” said Sporting KC captain Matt Besler of Busio’s performance against the Dynamo. “The second half he did exactly what we talked about. He was getting in behind the midfielders and right in that pocket, and we were able to find him a couple times. Him and Diego were linking up, and I’m glad Diego finished it. I’m really happy for him.”

Busio likely won’t make consistent appearances for Sporting KC throughout the remainder of the season, but the midfielder certainly showed Vermes that he can turn to the 16-year-old Busio and not worry about whether the teenager can handle the physical play of MLS.

Between those three young players and the 22-year-old homegrown forward Daniel Salloi, who’s having a breakout year of his own in 2018, the future looks bright in Kansas City.