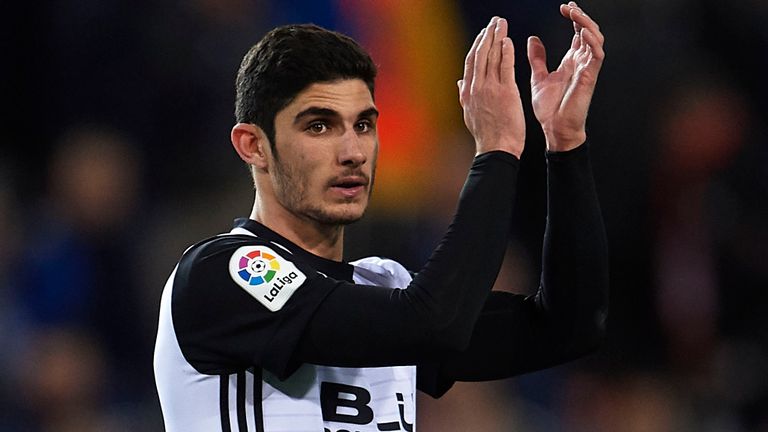 With a big weekend of European Soccer on the horizon, many teams are making their final moves of the transfer window with its closure this evening.

Two La Liga sides have made the biggest splashes on Friday so far, while numerous loan moves have intrigued Europe’s top leagues. Ligue 1 side PSG has also been in the mix, acquiring and seeing players head out as well.

Here’s SBI’s rolling list of all of Friday’s last-minute deals:

Goncalo Guedes has made a move from Ligue 1 giants PSG to Valencia for a reported £36 million. Guedes, spent last season on-loan with Valencia and has also won 14 caps with Portugal. (REPORT)

Sevilla has confirmed the signing of Quincy Promes for €20 million from Russian side Spartak Moscow. Promes has signed a five-year deal with the La Liga club and netted a brace against Sevilla in last season’s Champions League. (REPORT)

Lyon has acquired French striker Moussa Dembele from Celtic for £19.7 million. Dembele, a French U-21 player, scored 26 goals in 55 appearances with the Scottish club. He has signed a five-year deal with the club. (REPORT)

Eintracht Frankfurt has acquired German international goalkeeper Kevin Trapp on a season-long loan from PSG. Trapp has seen his playing time limited in Paris with the arrival of Gianluigi Buffon and the rise of Alphonse Areola. (REPORT)

Nuri Sahin remains in the Bundesliga as he joins Werder Bremen following the cancellation of his contract at Borussia Dortmund. The 29-year-old has signed a two-year deal with the club. (REPORT)

Paris Saint-Germain have acquired Spanish wingback Juan Bernat for €15 million from Bayern Munich. Bernat joined Bayern in 2014 and played in 113 competitive matches for the club. (REPORT)

Diafra Sakho has joined Turkish side Bursaspor on a season-long loan from Rennes. The former West Ham man scored two goals in 13 appearances for Rennes in Ligue 1 play, helping them to a fifth place finish in 2017-18. (REPORT)

Real Madrid has cut loose left back Fabio Coentrao while also sending Borja Mayoral to Levate on a season-long loan. Coentrao has joined Portuguese outfit Rio Ave, despite having a contract with Los Blancos until 2019. (REPORT)

Real Betis has acquired Giovani Lo Celso on-loan from PSG. The 22-year-old made 48 appearances in all competitions last season but has fallen out of favor with new manager Thomas Tuchel. (REPORT)

Croatian U-21 defender Filip Benkovic has joined Celtic on a season-long loan from Leicester City. Benkovic joined Leicester from Dinamo Zagreb but failed to earn a regular starting role under Claude Puel. (REPORT)

Nacer Chadli has joined AS Monaco from EFL Championship side West Bromwich Albion for £10 million. Chadli scored six goals with the Baggies, but did not feature this season in the second-tier. (REPORT)

Derby County has sent striker Cameron Jerome to Goztepe for an undisclosed amount. Jerome scored five goals in 18 appearances with the Rams. (REPORT)

Sheffield Wednesday has acquired Tottenham’s Josh Onomah and Chelsea’s Michael Hector on-loan for the remainder of the season. Onomah scored four goals in 33 appearances on-loan at Aston Villa a year ago, while Hector made 38 appearances with Hull City. (REPORT)

Kara Mbodji has joined Ligue 1 side Nantes on-loan from Belgian side Anderlecht. Injuries plagued Mbodji in 2017-18, as he only made 20 appearances for the club. (REPORT)

Leeds United has sent midfielder Vurnon Anita to Willem II of the Netherlands on a season-long loan. Anita made 22 appearances for Leeds in 2017-18 after joining on a free transfer to Newcastle United. (REPORT)

Former Celtic and Rangers striker Kenny Miller has joined Dundee of the Scottish Premier League. Miller, 38, was serving as player-manager of Livingston, scoring one goal in seven appearances. (REPORT)

Manchester City has sent Douglas Luiz on a season-long loan to Girona . The 20-year-old made 15 league appearances with Girona last season also on-loan from the EPL champs. (REPORT)

Nottingham Forest has signed defender Saidy Janko on-loan from FC Porto for the remainder of the season. Janko, 22, has represented Switzerland at the U-21 level and spent time with FC Zurich and Manchester United as a youngster. (REPORT)

Sheffield United has acquired striker Conor Washington on a free transfer from Queens Park Rangers. The Northern Ireland international scored 14 goals in 98 matches for QPR since arriving in Jan. 2016. (REPORT)

Dundee has also acquired left back Calvin Miller on-loan from Celtic. The 20-year-old has made four first team appearances with the Hoops and seeks first-team experience with bottom-placed Dundee. (REPORT)

Hull City has acquired defender Tommy Elphick on-loan from Aston Villa. Since his move to Villa from Bournemouth in June 2016, Elphick has only made 35 appearances for the club. He spent the second-half of 2017-18 on loan at Reading. (REPORT)