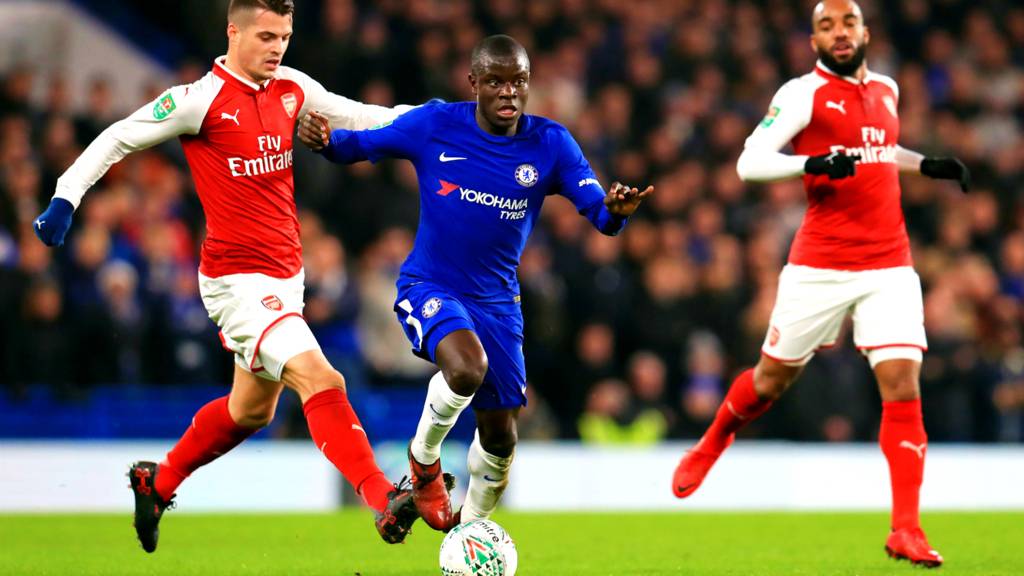 The English Premier League rolls on this weekend with a London Derby taking place between two of England’s historic clubs. However, both Arsenal and Chelsea are coming into this weekend’s showdown off opposite results as they square off at Stamford Bridge.

The Gunners fell, 2-0, in their season opener to Manchester City as Unai Emery suffered his first defeat as Arsenal boss. Despite the defeat, Pierre-Emerick Aubameyang and Alexandre Lacazette both looked sharp and will seek to find the back of the net in Week No. 2.

Chelsea rolled past Huddersfield Town, 3-0, using goals from three different players. Summer signing Jorginho slotted in from the penalty spot, while N’Golo Kante and Pedro also found the back of the net. Arsenal got the better of the Blues in last season’s League Cup semifinals while the teams drew in their two league meetings in 2017-18.

Elsewhere this weekend, La Liga kicks off with defending champs Barcelona hosting Alaves on Saturday. Real Madrid hosts Getafe on Sunday, while Atletico Madrid travels to Valencia on Monday. Serie A also begins as Cristiano Ronaldo begins his domestic season with Juventus at Chievo Verona. Lazio hosts Napoli in the Serie A showdown of the weekend. Ligue 1 also continues as PSG travels to Guingamp while Monaco hosts Lille on Saturday.

For the first time since 2013-14, Tottenham will host London rivals Fulham in a league match at Wembley. Mauricio Pochettino’s side eased past Newcastle United, 2-1, in their opener a week ago, using an 18th-minute winner from Dele Alli to seal the win. Tottenham may not have made any big splashes this summer, but still have talent all over the field including Harry Kane and Christian Eriksen in attack. As for Fulham, they fell, 2-0, vs. Crystal Palace in their opener and will look to snatch their first win over Spurs since March 2013. If the visitors want to spoil the party at Wembley, they will need captain Tom Cairney and playmaker Ryan Sessegnon to up their game. The duo combined for 22 goals and 13 assists in the EFL Championship a year ago.

Closing out the weekend’s action is Liverpool’s trip to Selhurst Park on Monday. The Reds are coming off a 4-0 beatdown of West Ham at Anfield, where Mo Salah, Sadio Mane, and Daniel Sturridge all scored goals. Jurgen Klopp’s side looks dominant on all fronts and will need to be if they want to lift the league title come May. The Eagles defeated Fulham away from home in their opener with playmaker Wilfried Zaha etching his name on the scoresheet. The 25-year-old Ivorian is a deadly winger to deal with and could pose problems for the Liverpool backline.

The 2018-19 La Liga campaign is here and defending champions Barcelona will kick off their season on Saturday. Ernesto Valverde’s side open at the Camp Nou against Alaves looking to get off on the right foot. The Catalan side bolstered their attack with the signings of Malcom and Arturo Vidal this summer, which should add even more options for Valverde to choose from. Lionel Messi and Luis Suarez again highlight the attack after combining for 59 league goals a year ago. Alaves finished in 14th place a season ago, finishing 18 points clear of the drop zone. Midfielders Ibai Gomez and Manu Garcia are two players to watch for Alaves this season, as they both add creativity in the attack. The duo combined for 10 goals a season ago and will need to lead a side who scored 40 goals in 38 matches in 2017-18.

Real Madrid’s quest for another league title begins on Sunday as they welcome Getafe to the Santiago Bernabeu. A 4-2 defeat on Wednesday in the UEFA Super Cup to rivals Atletico Madrid is not how Real wanted to begin their domestic season and they will need to show a short memory this weekend. Returning in the attack is winger Gareth Bale and striker Karim Benzema who combined for 21 goals and 12 assists in 58 appearances a season ago. Getafe finished in eighth place last season, totaling 55 points in their 38-match campaign. Strikers Jorge Molina and Angel are the players to watch for Getafe, after finishing in the team’s top two for goals scored.

Cristiano Ronaldo’s domestic Juventus debut comes on Saturday as the Old Lady kicks off their title defense against Chievo Verona. Juventus will look a little different with several veterans gone from the roster, as some new faces try to break the starting XI. Claudio Marchisio and Gianluigi Buffon are gone while Gonzalo Higuaín has joined AC Milan on a season-long loan. Ronaldo is coming off a 41-goal haul last season in all competitions, and will start next to Paulo Dybala and Mario Mandzukic. Chievo finished in 13th a season ago, totaling 40 points in 38 matches. Midfielders Emanuele Giaccherini and Valter Birsa are two players to watch for Chievo, who have some new faces at the striker position.

Saturday’s final match is the top fixture of the opening weekend as Napoli travels to Lazio. Napoli are under new guidance as Carlo Ancelotti takes over for the departed Maurizio Sarri. Midfielder Jorginho followed Sarri to EPL outfit Chelsea, but plenty of attackers remain at the Sao Paolo. Lorenzo Insigne and Dries Mertens are two deadly players to watch, while new arrival Simone Verdi is coming off a 20-point season a year ago. Lazio are seeking to be in the title race and have plenty of talented pieces coming back in 2018-19. Sergej Milinkovic-Savic (14 goals) and Ciro Immobile (39 goals) are two of Lazio’s leaders in the offensive attack, while Adam Marusic will be the key to a new backline.

Sampdoria vs. Fiorentina, AC Milan vs. Genoa both postponed

Paris Saint-Germain kicked off their league campaign with a 3-0 triumph over Caen a week ago and now Thomas Tuchel’s team hits the road for the first time this season. U.S. forward Tim Weah netted his first league goal for PSG in their victory a week ago and the now the 18-year-old will seek even more in his second consecutive appearance. Guingamp is PSG’s opponents on Saturday, who are coming off a 2-1 road defeat at St. Etienne last Saturday. The big question for Guingamp is who will fill the void left by departing forward Jimmy Briand, after his 11 goals a season ago. Former Metz striker Nolan Roux is expected to be the answer after 15 goals in the top-flight a year ago.

AS Monaco seeks their second consecutive win as they welcome Lille to the Stade Louis II. A trio of second-half goals sealed a 3-1 road win for Monaco at Nantes last Saturday, as Radamel Falcao, Stevan Jovetic, and Rony Lopes all scored. Falcao is the danger man for Monaco, after 18 league goals in 2017-18 for the eventual second-place finishers. Lille began their season on a high, defeating Rennes 3-1 at home in comeback fashion. Summer acquisition Jonathan Bamba opened his account with the club, scoring his first goal in the win. The 22-year-old had 15 points with St. Etienne last season and will look to help Lille pull a huge upset on the road this weekend.