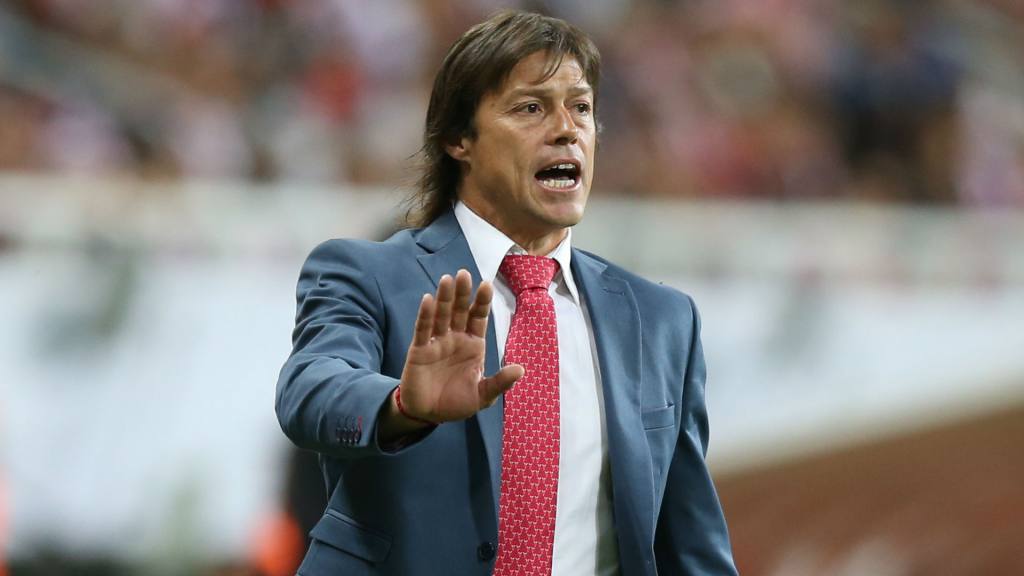 Matias Almeyda left his position as manager of Chivas in June, but looks to be nearing a move on the National scale.

According to ESPN, the Argentinian is in talks to take over as the Costa Rica National Team head coach. Almeyda declared his interest to take over Mexico or his native Argentina, while he has also been linked to Paraguay as well. However, despite several other teams being mentioned, it looks like Los Ticos has the upper hand.

Almeyda told La Nacion that his family would be happy to live in Costa Rica and that money would not be a deciding factor in the deal.

“I had the chance to talk with [Costa Rica’s] directors. They called me, which I appreciate a lot,” Almeyda said. “As I was on vacation with the family at that moment, we agreed to talk a little next week and to give them an answer, but I really value the fact that their interest is concrete.”

”There’s something very close with Costa Rica, that’s the reality, but all the countries and national teams are rearming again and that’s how I see it,” Almeyda continued. “I believe that they are taking their time to think hard about who to pick.”

Almeyda lifted a Liga MX title and the Concacaf Champions League with Chivas in April, but also stated to have turned down a move to Al-Rayyan in Qatar. He also said to have been approached by EFL Championship side Leeds United.

Los Ticos did not renew the contract of coach Oscar Ramirez after their first-round exit in this summer’s World Cup.

Barcelona’s midfield got that much deeper  after reaching an agreement for Bayern Munich’s Arturo Vidal. The 31-year-old has signed a three-year deal with Barca and is expected to have a medical in the coming days, BBC Sport reported.

Vidal joined Bayern from Juventus in 2015 and won three Bundesliga titles with the Bavarian giants. He also lifted one German Cup and two German Super Cups. He is moving for a €25 million fee in the final year of his current contract with Bayern.

“We’d like to thank Arturo for all his contributions and wish him all the best in Spain,” the team announced.

“He always turned up in important games and we could always rely on him,” said Bayern’s chief executive Karl-Heinz Rummenigge.

Joe Hart’s reign at Manchester City may have come to an end, but the English keeper is seeking another move within the Premier League.

Burnley are close to signing the former England international for £4 million from the defending EPL champs, Goal reported. Hart will be undergoing a medical on Friday evening and looks keen to sign a three-year deal with the Clarets.

Due to injuries to Nick Pope and Tom Heaton, Sean Dyche’s men needed another keeper especially with their recent inclusion in the UEFA Europa League playoff rounds. Despite neither of their top two keepers fit to play on Thursday, Burnley advanced past Scottish-side Aberdeen and will now face Istanbul Basaksehir in the third round next week.

Since Pep Guardiola’s arrival in 2016, City has tried to find a permanent deal for Hart but has only been able to loan him off in consecutive years. He is coming off a free summer after missing England’s World Cup squad but is seeking stability in the back-end of his career.

Hart has made 348 appearances for the club, winning two Premier League titles, an FA Cup, and two League Cups. Manchester City kick off their domestic campaign with the FA Community Shield on Sunday at Wembley Stadium against Chelsea.

Croatian international Marko Pjaca has struggled to break into the Juventus’ first-team consistently and is now set for a move inside Italy.

Fiorentina has signed the 23-year-old on-loan for €3 million with an option to buy, Juventus announced. If Fiorentina want to make the deal permanent, they would be expected to pay an additional 22 million at the end of the season.

Pjaca came to Juve from Dinamo Zagreb in 2016, but injuries has been a huge issue for the midfielder. Since his arrival, Pjaca has only made 20 appearances in two seasons with Juve, while also spending the second-half of 2017-18 on loan with Schalke in the Bundesliga.

He made the Croatian World Cup squad this summer, where he featured three times including a short cameo in the final against winners, France.

Pjaca will join Gonzalo Higuaín and Andrea Favilli as the third Juventus forward to head out on-loan this season.

Nigerian international Alex Iwobi has made a quick impact on new Arsenal boss Unai Emery and has been handed a new contract because of it.

Iwobi signed a long-term extension with Arsenal on Friday, which now links him to the club until 2022, Sky Sports reported. Iwobi joined the Arsenal Academy at nine years old and broke into the first team in 2015. At 22, Iwobi still has a bright future and was happy to have Arsenal be included in it.

“It’s always been my childhood dream to represent Arsenal, from young,” Iwobi said at a press conference. “To get an extended contract is an amazing feeling and I hope I’m doing the Arsenal family proud as well as my family.”

“I’m very pleased Alex has signed a new contract with us,” Emery said. “He is a great example of a player who can succeed from the Academy through hard work and I look forward to working with him and our other talented players in the squad.”

In his 98 first-team appearances in London, Iwobi has nine goals. He is coming off a World Cup showing with the Super Eagles, where he has earned 21 caps.

Chuba Akpom was always going to find it tough for first-team minutes at boyhood club Arsenal, and now the 22-year-old is on his way out of London.

Akpom has made the switch to Greek Super League side PAOK Salonika, joining on a three-year deal, Sky Sports reported. He joined the Gunners academy at age six and rose through the ranks.

However despite his allegiance to his club, Akpom has seen loans to Brentford, Coventry City, Nottingham Forest, Hull City, Brighton & Hove Albion, and most recently Sint-Truiden.

His move to Belgium last season saw Akpom scored six goals in 16 matches, and now the England-born Nigerian is set for a move to Greece. Akpom made 12 first-team appearances for Arsenal during his career there.