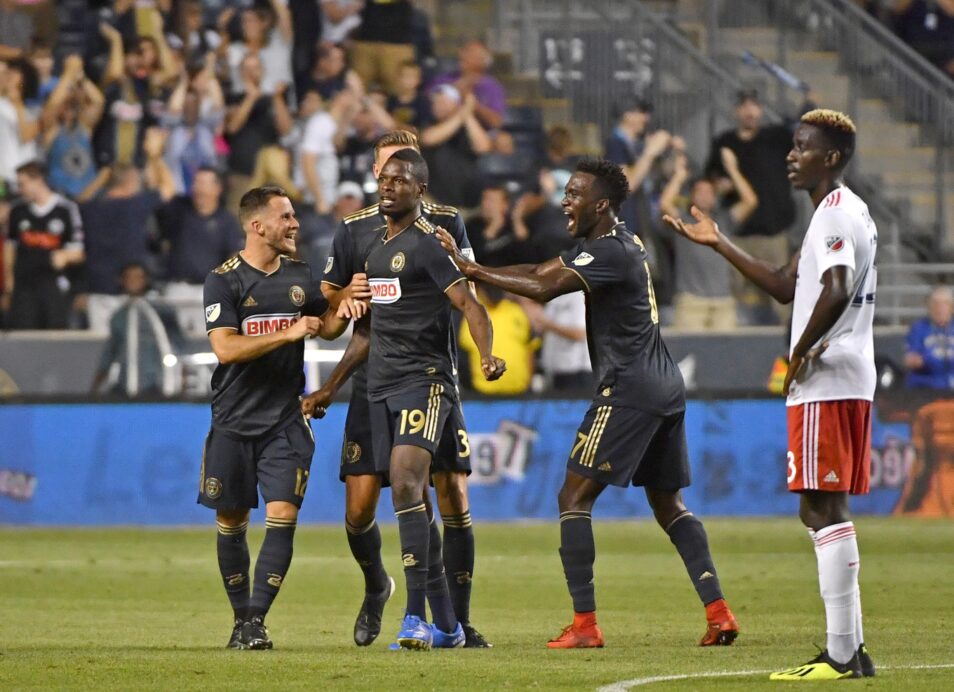 Rivalry Week rolled on Saturday with a pair of Eastern Conference teams grabbing important wins in their fight for playoff places.

The Philadelphia Union edged the New England Revolution 1-0 at Talen Energy Stadium behind Cory Burke’s breakaway finish. VAR was a factor in the match and in the end went the Union’s way.

Elsewhere, Toronto FC rolled past the Montreal Impact at BMO Field behind a Sebastian Giovinco brace. Out west, Sporting KC handled Minnesota United without much difficulty, while RSL traveled to face the Colorado Rapids.

Vancouver paid a trip to the struggling San Jose Earthquakes in the late match of the evening, returning home with a comeback victory.

The Vancouver Whitecaps grabbed a huge three points on the road on Saturday, erasing a two-goal first-half deficit against the San Jose Earthquakes for a 3-2 win.

Jahmir Hyka and Magnus Eriksson scored 11 minutes apart in the first-half to give Mikael Stahre’s men a surprising 2-0 lead. However, the visitors took advantage of the match near the hour mark with a pair of quick goals.

Yordy Reyna’s free-kick in the 59th-minute started the comeback for Vancouver, before Cristian Techera slotted in their equalizer two minutes later.

Reyna set up Kei Kamara in the 68th-minute for his 11th goal of the season which put Carl Robinson’s team ahead for good. The Quakes only had three shots on goal, eventually falling to their second defeat in their last three matches.

Vancouver jumps up to seventh in the West, after extending their unbeaten run to five matches.

Man of the Match: Kamara’s strong season with Vancouver continued as he scored the game winner in the Whitecaps comeback victory.

Moment of the Match: Reyna’s perfectly placed free kick began the turnaround for Vancouver who would score twice more to claim three points.

Match to Forget: Quakes keeper Andrew Tarbell has not had a great season and that trend continued on Saturday as the 24-year-old allowed another three goals.

The Philadelphia Union got some help from video review on Saturday night as they downed the New England Revolution 1-0 at Talen Energy Stadium.

Following a scoreless first-half, Cory Burke’s strong run of form continued for the Union as the Jamaican slotted home on a breakaway for a 1-0 lead. Video review was used after it looked that Burke was offsides, but referee Drew Fischer ruled in favor of the hosts.

The Revolution’s backline stopped after the whistle looked to have been blown, but the goal stood as Burke now has seven goals in his debut MLS season.

Brandon Bye’s header in the 67th-minute look destined for the bottom-right corner but Haris Medunjanin made a huge goal line clearance for Philly. Cristian Penilla’s right-footed curler in the 70th-minute forced Andre Blake into a huge fingertip save.

The Jamaican keeper’s biggest save came in the 80th-minute as he stretched backwards and pushed Juan Agudelo’s header away. A hanging cross was met by Agudelo but Blake was able to get through traffic and push out the attempt.

Blake would make four saves for his second straight clean sheet, while Matt Turner made two for New England.

The Union (11-11-3) have a quick turnaround as they travel to D.C. United on Wednesday.

As for the Revs (7-10-8), their struggles of late continue and they next host the Portland Timbers on Sept. 1st.

Man of the Match: Cory Burke’s strong run in front of goal continued on Saturday as the Jamaican netted the winner for Philadelphia. Despite everyone stopping on his breakaway, Burke did not and scored his seventh goal of the season.

Moment of the Match: The video review decision was a strange one at that but in the end it went the Union’s favor.

Match to Forget: Diego Fagundez was rarely a threat for the Revs who were without striker Teal Bunbury.

The defending MLS champs routed one of their biggest rivals as they continue their push up the Eastern Conference standings. Toronto FC used a brace from Sebastian Giovinco to down the Montreal Impact 3-1 at BMO Field.

Giovinco opened the scoring in the seventh minute as he beat Evan Bush. The Italian doubled TFC’s advantage in the 22nd-minute as he slotted Jonathan Osorio’s assist into the bottom-left corner. He now has 10 goals this season.

Osorio’s right-footed finish in the 29th-minute extended Toronto’s lead to 3-0 as it looked to be smooth sailing for TFC. Montreal’s Alejandro Silva pulled one back immediately after the restart but it would be the closest the Impact would come to a comeback.

Alex Bono made five saves in the home win for TFC, which sees them move to six points behind their Canadian rivals. Bush made two saves in the defeat, which was the Impact’s first since July 28th.

Man of the Match: Giovinco played the hero for Toronto, scoring a brace in what was a must-win at home.

Moment of the Match: Osorio’s goal truly put the match out of reach for the Impact who went down by two heading into halftime.

Match to Forget: Ignacio Piatti was quiet for Montreal, failing to score in the lopsided loss

Going through an entire month without allowing a goal is an impressive achievement, and it’s one that Sporting KC just happened to check off their list this August.

Peter Vermes’ side capped off a perfect month with a 2-0 home success over Minnesota United on Saturday.

Just minutes after checking in at the half, Yohan Croizet put Sporting KC up with the first goal of the match. Johnny Russell found Croizet in the box, and the midfielder’s perfect first touch gave him just enough space to send a shot past Bobby Shuttleworth.

Diego Rubio continued his hot streak as he doubled KC’s lead in the 62nd-minute. The forward finally found the net after a quiet first hour into the match. Once again Russell registered the assist, after finding Rubio in the box before the striker slotted the ball in the lower left corner of the goal.

The Loons have plenty of chances to score but was silenced by the strong showing of keeper Tim Melia. Melia made eight saves against the Loons, who did not have Darwin Quintero available for the match.

Sporting finished the month with four clean sheets and leapfrogged LAFC into second spot out West.

As for Minnesota, they remain in ninth place and are eight points out of the final playoff spot.

Man of the Match: Johnny Russell jumped back into the starting XI after recovering from injury and some much needed rest, and it was the Scottish winger’s two assists that led to both goals on the night for Sporting KC.

Moment of the Match: It was clear at the half that something needed to change if Sporting KC wanted to find the net, so Peter Vermes made the bold choice to take out his highest paid player Felipe Gutierrez for Yohan Croizet, who has been underwhelming during much of his first year in Kansas City. The Frenchman rewarded Vermes for his choice, though, as just minutes after checking in at the half he put Sporting KC up with the go-ahead goal.

Match to Forget: Bobby Shuttleworth kept the high-powered Kansas City attack at bay for the first half, but the wheels fell off in the second. The keeper was late to react to both goals from Sporting. While it would have taken a bit of skill to save them, they were by no means unstoppable goals.

Just when Colorado Rapids fans thought their season couldn’t get any worse, it did on Saturday night. Anthony Hudson’s men were steamrolled by Real Salt Lake 6-0 on Saturday as Colorado lost two men to red cards.

Damir Kreilach opened the scoring for Real Salt Lake in the sixth minute when he slotted home a cross from fellow attacker Joao Plata. The goal was Kreilach’s seventh of the season.

Colorado’s Niki Jackson was sent off just minutes later after an attempted headbutt on Albert Rusnák. Jackson’s offense was instigated by a verbal altercation with Salt Lake players while Colorado was taking a corner.

RSL doubled their advantage in the 33rd minute through Jefferson Savarino. The diminutive midfielder found himself in the right place at the right time, pouncing on a loose ball in the box before powering a shot through Tim Howard’s hands.

The Rapids’ poor evening went from bad to worse when Nana Boateng was sent off just before half-time. The Ghanian midfielder saw red for an ill-timed, malicious challenge on Brooks Lennon, who was left writhing on the pitch after the foul.

Savarino scored his second goal of the game in the 58th minute. A beautiful, curling strike from the Venezuelan attacker beat a diving Howard, whose Rapids fell into an even deeper hole at 3-0 down.

The second-half got worse for Colorado as Plata extended the lead in the 69th-minute, before rookie Corey Baird bagged his sixth goal of the season later on. Baird played distributor on RSL’s final goal of the evening, a composed finish by Rusnak in the 86th-minute.

It was the Rapids second straight defeat, which sees them remaining in 11th place out West. Colorado next travels to Portland on Sept. 8th after a lengthy break off.

RSL remains in fourth in the West, and face the LA Galaxy at Rio Tinto Stadium on Sept. 1st.

Man of the Match: Savarino was a huge performer on Saturday, scoring a brace in the lopsided win. His creativity has been huge for RSL this season as they continue to hold on to a playoff place.

Moment of the Match: The first red card issued to the Rapids hamstringed them early but the second was the final nail in the coffin. Both players will now see suspensions as their team tries to find any positives the remainder of the season.

Match to Forget: Both Jackson and Boateng should be disappointed with their performances as they both received early showers and ejections.