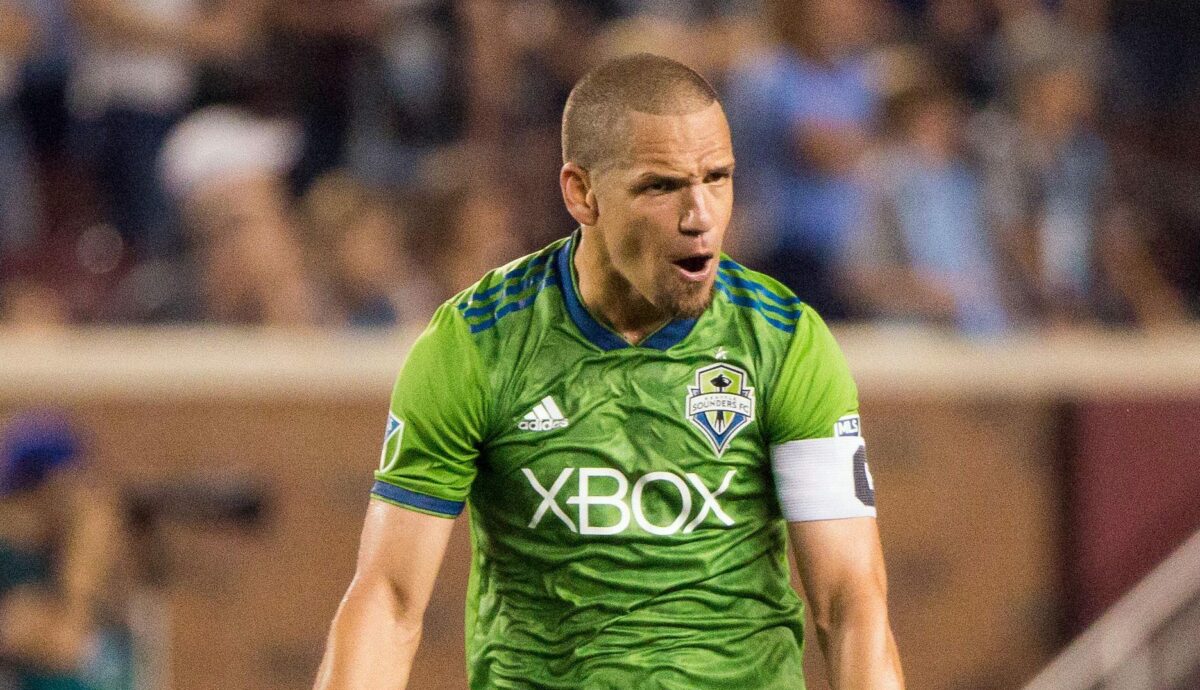 Wild finishes and upsets were the special of the day in Saturday’s MLS action.

The San Jose Earthquakes won their first match since May, and did so by handing FC Dallas its first home loss in more than a year. The Colorado Rapids also delivered an improbable result, halting the LA Galaxy’s nine-match unbeaten streak to snap their own five-match winless slide.

Here is a closer look at all of Saturday’s MLS action:

Josef Martinez inched closer to the MLS single-season scoring record with a second-half brace for Atlanta United, but the Venezuelan’s scoring exploits wasn’t the main story coming out of Saturday’s opener.

Tosaint Ricketts equalized in the 91st minute for the Reds on a brilliant team move started by Sebastian Giovinco, who netted the opener in the contest, in the middle of the park.

After a long VAR check, the goal counted, as Ricketts remained onside as he received the final assist from Jonathan Osorio.

Drama ensued after the final whistle, as Chris Mavinga made contact to the face of Leandro Gonzalez Pirez.

Mavinga was given a red card for his actions, which puts TFC down a key player entering Week 24’s clash with New York City FC.

MAN OF THE MATCH: Josef Martinez  scored two goals to move within a goal of tying the MLS season record. Alex Bono deserved consideration as well for his handful of big saves to keep TFC in position to grab a late draw.

MOMENT OF THE MATCH: Sebastian Giovinco’s beautiful pass sparked the sequence that led to Toisant Ricketts late equalizer for TFC.

MATCH TO FORGET: Chris Mavinga had his hands full all day, but made an already tough day even worse by drawing a post-match red card that will cost him at least one match.

Despite going ahead early, the Montreal Impact dropped points at home once again.

It took five minutes for Montreal to get on the scoresheet.

Kofi Opare redirected a cross from Ignacio Piatti to Matteo Mancosu, who took advantage of the opportunity to score his third goal of the season.

Yamil Asad produced the equalizer for the Black and Red in the 70th minute. Luciano Acosta sent a cross into the six-yard box and Asad rushed over to connect with it for his ninth goal of the campaign.

Man of the Match: Yamil Asad managed to steal a point from D.C.’s visit to Montreal, as he scored his team-leading ninth goal.

Moment of the Match: Acosta’s pass to Asad set up the equalizer that produced a road point for Ben Olsen’s side.

Match to Forget: Michael Petrasso had trouble on the right flank for the Impact. The Canadian didn’t produce his best performance filling in for Chris Duvall.

The defensive miscues continued for the Lions in the 19th minute, as awful play building out of the back led to Cristian Penilla picking up a turnover and beating Earl Edwards Jr.

Dom Dwyer pulled back a goal for the hosts late in the first half, as he knocked Tony Rocha’s assist into the roof of the net.

Amro Tarek tied the contest in the 71st minute, when he popped open on a free kick and headed Yoshi Yotun’s service off the bar and Revs goalkeeper Matt Turner before going in.

Substitute Teal Bunbury put the Revs back ahead in the 75th minute, as he rolled a shot through Edwards’ legs after receiving a nice pass from Agudelo.

However, the Revs couldn’t hold on to the lead, as Sutter knocked in the final equalizer of the contest to split the points.

Man of the Match: Juan Agudelo produced a goal and an assist in the frantic six-goal thriller that didn’t help the playoff chances of either side.

Moment of the Match: Sutter’s late tally saved the Lions from another humiliating loss.

Match to Forget: Yoshi Yotun didn’t make a significant impact on the contest and was sent off in second-half stoppage time for hands to the face.

The San Jose Earthquakes won their first game over an opponent not named Minnesota since September 30 at Toyota Park.

Vako handed the visiting Earthquakes an early advantage in the 19th minute, as he skirted around Jesse Gonzalez on a counter and finished into the back of the net.

Jahmir Hyka put the Quakes back ahead in the 47th minute, when he pulled down the ball with a nice touch on the right side of the penalty area and slotted a shot into the bottom-right corner.

Vako finished off the Quakes’ third victory of the season, as he put Chris Wondolowski’s cross from the left side of the penalty area past Gonzalez.

Man of the Match: Vako scored two goals on nine shots for his first two-goal performance in a Quakes shirt.

Moment of the Match: While the three goals were a nice reward for hard work, Andrew Tarbell’s double save at the start of the second half kept the Quakes ahead at a crucial juncture.

Match to Forget: Michael Barrios had an unlucky night in front of goal, as he was denied by Tarbell twice in the 52nd minute and failed to produce an equalizer in the second half.

The Seattle Sounders continued their march toward a playoff spot with a late comeback win that delivered a gut-punch to the Loons.

A Nicolas Lodeiro penalty kick in the 91st minute helped Seattle cancel out an early Darwin Quintero goal. The Sounders probably would have been happy with a point, but took all three when Will Bruin raced onto a flick header from Raul Ruidiaz before volleying home the winning goal.

The victory helped the Sounders leapfrog Minnesota United in the Western Conference standings, and within two points of a playoff spot.

Man of the Match: Will Bruin scored the winning goal and

Moment of the Match: Minnesota United looked to be on the way to scoring an insurance goal, but a Stefan Frei save, and subsequent VAR decision leading to a Sounders penalty started the sequence that led to the Seattle win.

Match to Forget: Miguel Ibarra committed the handball that led to Seattle’s equalizer, a play he was foolish to make in the VAR era.

The Vancouver Whitecaps rested several starters ahead of a big midweek Canadian Cup clash, but Carl Robinson’s bench stepped up to help earn a road point at Yankee Stadium.

Erik Hurtado finished off a perfect Brek Shea cross in the 87th minute to help Vancouver earn a 2-2 tie.

The Whitecaps opened the scoring when they caught NYCFC on the counterattack, with Nicolas Mezquida dribbling the length of the field before blasting a shot past Brad Stuver in the 23rd minute.

Jesus Medina equalized for NYCFC in the first minute of first-half stoppage time, collecting a pass from Anton Tinnerholm, switching the ball from his right foot and sliding a low shot past Stefan Marinovic for his fourth goal in five matches.

NYCFC took the lead just 50 seconds into the second half, with Jo Inge Berget’s hold-up play in the penalty area producing a pass to Valentin Castellanos, and the NYCFC newcomer scored on his debut.

Man of the Match: Nicolas Mezquida set the tone for the night with his lengthy run and 25-yard blast to open the scoring.

Moment of the Match: Erik Hurtado’s 87th-minute equalizer was the product of a perfect cross and finish.

Match to Forget: Ben Sweat came off the bench to help lock things down defensively, but lost his mark on the Whitecaps equalizer.

Sam Nicholson handed the Colorado Rapids a late winner at home over the LA Galaxy, as he finished off Edgar Castillo’s cross from the left wing.

Nicholson’s 90th-minute strike was the second tally recorded in the final 45 minutes by Anthony Hudson’s team, with the first coming from Kellyn Acosta.

Acosta scored his second goal in two matches since being acquired by the Colorado Rapids to tie things up at Dick’s Sporting Goods Park against the LA Galaxy.

The Galaxy went ahead midway through the first half by way of Romain Alessandrini, who finished off an easy scoring opportunity from the middle of the penalty area in the 33rd minute, as he finished past Tim Howard after a deflection landed the ball at his feet in open space.

Man of the Match: Sam Nicholson was the most active attacker on the field, and he turned his third shot on goal into the game-winning strike.

Moment of the Match: Nicholson’s late strike handed the Rapids their first victory since July 1.

Match to Forget: Ola Kamara only attempted one shot with Zlatan Ibrahimovic out of the lineup.

Diego Rubio netted the lone strike in the 74th minute after 16-year-old Gianluca Busio, who made his first start, connected the attack in the buildup.

Alejandro Fuenmayor ruined the Dynamo’s chances of earning three points early, as he was sent off in the 14th minute for a contact with his elbow to the back of Busio.

To make matters worse for the Dynamo, Alberth Elis and Darwin Ceren were sent off in second-half stoppage time after a video review.

Man of the Match: Sixteen-year-old Gianluca Busio impressed in his first MLS start, and he played a key role in the game-winning goal notched by Rubio.

Match to Forget: Fuenmayor received his marching orders in the 14th minute, but he won’t be the only player unavailable for selection in Columbus in Week 24.

Damir Kreilach’s brace powered Real Salt Lake past the Chicago Fire, with the second being the game-winning strike in the 75th minute.

Kreilach, who also found the back of the net in first half stoppage time, connected with Joao Plata’s cross from the right wing to fire past Stefan Cleveland.

Kreilach opened the scoring for Real Salt Lake right before halftime, as he rose above a defender in the box and nodded home Jefferson Savarino’s cross from the right wing.

Shortly after the halftime break ended, Bastian Schweinsteiger leveled the contest for Chicago, as he blasted a shot into the right side of the net from distance past Nick Rimando.

Although Cleveland performed well in net for the Fire with eight saves, he couldn’t prevent the Fire from losing their sixth straight league game.

Man of the Match: Damir Kreilach’s two-goal performance made the difference for the Claret and Cobalt. It was his first brace for RSL.

Moment of the Match: Kreilach’s second tally helped RSL gain separation near the red line in the Western Conference.

Match to Forget: Alan Gordon and Luis Solignac had a rough night creating chances in the final third with Nemanja Nikolic and Aleksandar Katai rested ahead of Wednesday’s U.S. Open Cup semifinal against Philadelphia.

The longest unbeaten streak in MLS lives on, with the Portland Timbers trouncing the Union at Providence Park on Saturday.

Diego Valeri scored a goal and set up another to help Portland push its unbeaten run in MLS play to 15 matches.

The Philadelphia Union trotted out a squad with several reserves as Jim Curtin looked to rest some starters ahead of Wednesday’s U.S. Open Cup semifinal against the Chicago Fire.

That approach looked like it might work when the match was tied 0-0 at halftime, but the Timbers eventually broke through in the second half. A Fabinho foul led to a penalty which Valeri converted in the 58th minute.

The Timbers didn’t pull away until the 84th minute, when Valeri drew a penalty that Dairon Asprilla converted. Valeri set up a David Guzman finish in the 87th minute to seal the victory.

Man of the Match: Diego Valeri had a hand in all three Timbers goals.

Moment of the Match: Jeff Attinella’s 51st-minute save to deny Derrick Jones when the match was scoreless was a huge turning point.

Match to Forget: Fabinho struggled for much of the night, and not just on the penalty he gave up.