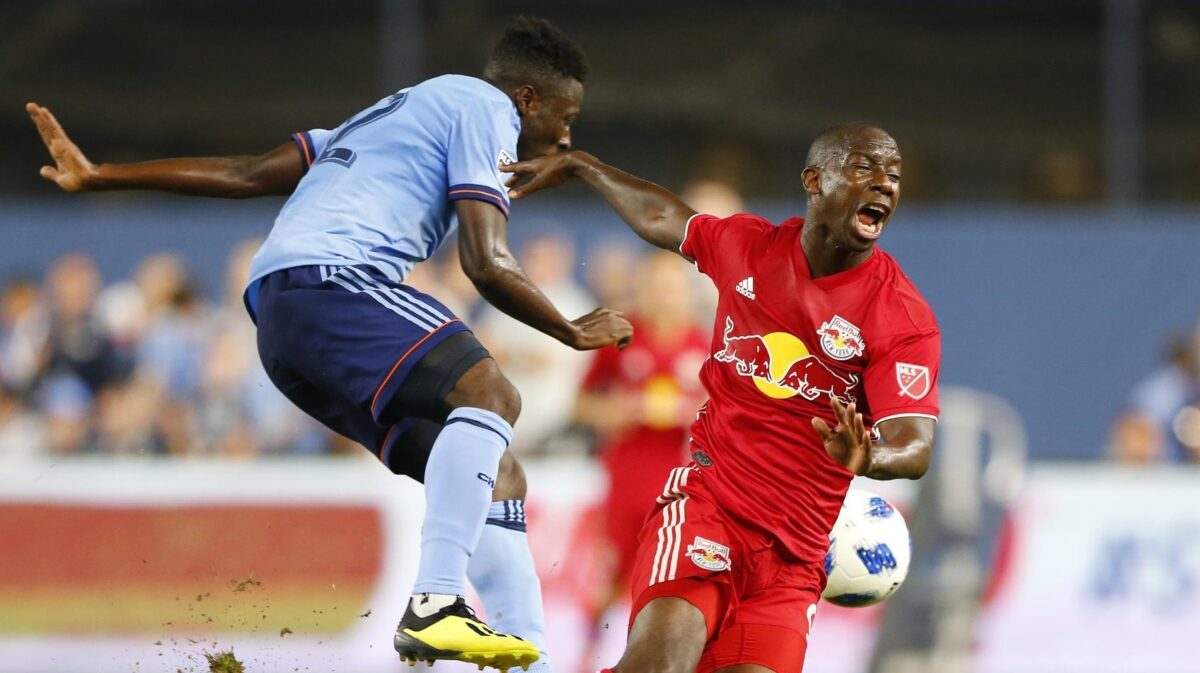 A familiar problem arose for the New York Red Bulls on Wednesday night, and this time they acknowledged it.

The Red Bulls picked up a midweek point after playing to a 1-1 draw with New York City FC, but the result probably felt more like a defeat given what transpired on the field at Yankee Stadium. The Red Bulls not only took the lead against their arch-rival after 37 minutes, but went up a man three minutes later following the ejection of the debuting Eloi Amagat and then went up two after Ebenezer Ofori was dismissed in the 73rd minute.

Despite holding a numerical advantage for almost an hour, the Red Bulls seemed like the team playing with fewer players. They simply could not do much of anything with the ball, electing to frantically attempt to push the tempo, as is their style, by bombarding forward with very few combinations between the players. It was lots of running, lots of long balls, lots of direct play.

The game, however, called for something different. Up a man and in need of a second goal to really put the game away, the Red Bulls needed to be less vertical and focus more on moving the ball from side to side in order to exploit the extra space initially allowed by Amagat’s sending off.

More passing, patience, and smart possession was required to carve open NYCFC, but, as has been the case in other tough losses that these Red Bulls have suffered in recent years, the team never figured out how to play anything but their preferred high-pressing style.

“We talked about it at halftime: control, understanding,” said Red Bulls head coach Chris Armas. “It wasn’t after the fact. We knew exactly what was required, so it’s just really disappointing knowing that if we’d just catch and played and moved the ball and take what the game gives. Instead we got a little antsy. We’re trying to force it a little bit, we’re trying some through-balls, and … it’s just about learning the right way and a calculated way, machine-like, to go after it.

“We knew where the space would be, we knew it would be on the flanks, so it’s understanding it and then doing it.”

The Red Bulls didn’t do it, though. On top of NYCFC somehow winning the possession battle by a 51.5-48.5 mark, the hosts looked the deadlier of the two teams in the second half. David Villa scored an equalizer seven minutes after the break, and Rodney Wallace came closest on either side to finding a winner but embarrassingly skied his open look at the back post in the 66th minute.

Even after Ofori was given his marching orders, the Red Bulls still could not find the necessary resolve to win the final 2018 edition of the Hudson River Derby. In fact, it was not until the seven minutes of second-half stoppage time began that the Armas’ side looked capable of creating dangerous opportunities and even that was in part to NYCFC leaving itself bare at the back as it tried to push the limited numbers it had into the attack.

“I don’t remember what chances we had,” Alejandro ‘Kaku’ Romero Gamarra told SBI. “I think we could’ve waited, had the ball, and then from that create and finish chances. I do remember one that [Bradley Wright-Phillips] had but he couldn’t finish quickly because the goalkeeper pressured him, but I think that was the only one.”

Added midfielder Tyler Adams: “We created maybe two good chances from the possession that we had, but obviously not enough. We didn’t have enough ideas in the final third. We were forcing passes and getting lured into a game that they wanted and it benefited them in the end. They defended well in that nine-man block but, at the end of the day, it has to be better from us.”

Red Bulls fans have to be frustrated, especially because they have seen this type of game play out before. The club is probably the best team in MLS when it comes to forcing turnovers high up the field that can turn into quality chances, but it is a different story when opposing teams sit back and stay compact and organized and look to hit on the counter.

“We needed to move more,” said Gamarra. “Wait until they came out and then pass the ball around to try and move them out from deep in their half because it was getting difficult for us to enter the final third.”

“We know that we always have the same philosophy here and we try to do it in every game, but sometimes, depending on the opponent, we could change it up a little,” Gamarra added later. “But that’s not up to me or the team. I think we have to do better at recognizing moments when a team throws numbers back or when we have space to capitalize on. We have to get better, but we’re still on a good path and I think we’re putting together a great regular season.”

The Red Bulls are indeed enjoying a heck of a season and they could very well win the Supporters’ Shield again for the third time in six years, which is an impressive accomplishment. Nonetheless, the club has stated all year long that its main goal is to win that all-elusive first MLS Cup, and finding different ways to play and break down opponents can only help in that regard.

After all, we have seen the Red Bulls come up short plenty of times against teams that sit back and try to play more direct. The draw with NYCFC was just the latest example.

“Calmness, ease,” said Gamarra when asked what the Red Bulls could have done different to change Wednesday’s result. “We had the numerical advantage. We needed to stop and take a little more time with the ball. That’s what we lacked. They couldn’t run anymore and closed themselves. We needed patience to try and create and finish chances.”

“We had more players on the field than NYCFC obviously,” said midfielder Daniel Royer. “We should be able to play more, to possess the ball and create chances since we have more guys on the field.”