Sounders midseason revival continues with gutty victory against the Timbers 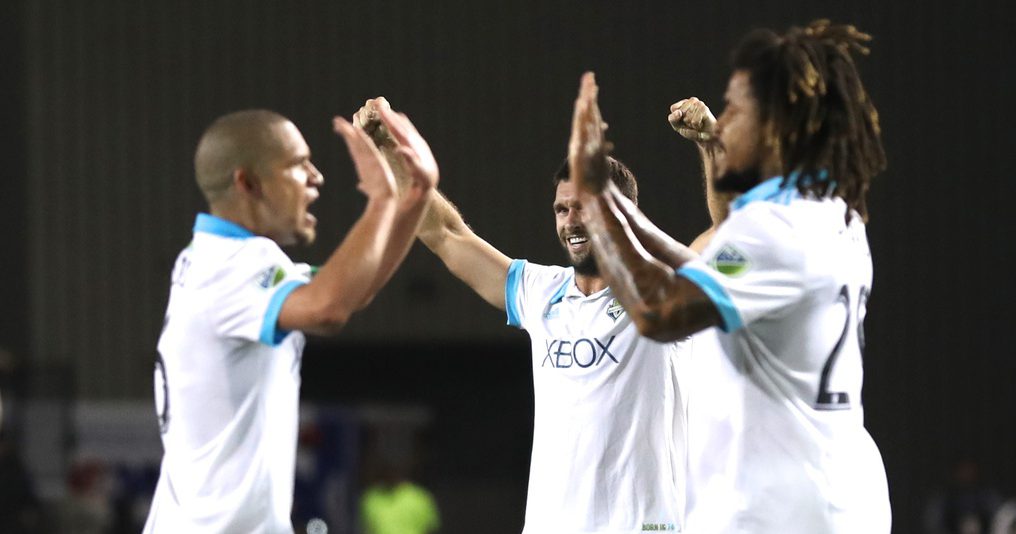 The Seattle Sounders are now owners of the longest MLS winning streak since the shootout became a thing of the past. Their seven game winning streak has them in playoff position for the first time all season long. It looks like the Sounders are experiencing another midsummer renaissance, just like they did each of the past two seasons when they won the Western Conference. Adding to the feelings of invincibility is the fact that they earned number seven with a grueling victory over their arch rivals.

Sunday night’s match rarely looked like one the Sounders deserved to win. They were outshot 22-6 on the night. Portland held a 63% possession advantage in the second half. The Sounders only earned two corners.

But soccer doesn’t always go the way of the raw statistics, and when Timbers defender Julio Cascante redirected a cross into his own net in the 76th minute, the Sounders had the breakthrough they needed to hold on for the massive away win.

“The guys are pretty happy, I’ll say that,” Sounders head coach Brian Schmetzer said after the win. “It showed the determination, the fight, the ability to win games in different fashions. I thought there were monster performances in that locker room.”

The main monster performance he was speaking of was from captain Osvaldo Alonso. While the Sounders rarely needed his skills in the attack, he was a force in the defensive half of the midfield that kept the Timbers speedy attackers at bay.

“In the middle of the field Osvaldo was great,” Schmetzer said. “You guys can rewatch and tell me, but he was great.”

Alonso’s success allowed the rest of the Seattle defense to shine, just as it has for most of the season. The Sounders have conceded only 26 goals this year, tied with the New York Red Bulls for the fewest in the league. Although it didn’t exactly work on Sunday, Schmetzer hopes a solid midfield can also bring out the best up front and improve a team that has the second fewest goals scored in MLS at only 32.

“Gustav [Svensson], I shifted him back, then he went back into the midfield and he and Osvaldo did a lot of the dirty work in the middle area of the field,” Schmetzer continued. “Again, trying to get the best out of Raúl [Ruidíaz], trying to get the best out of this group, each game is a little different, the ebb and flow of the game; we’ll watch the film and make those decisions.”

Regardless of whether the team is scoring goals or not, the Sounders have won seven straight and haven’t lost since the Timers marched into CenturyLink Field and escaped with a 3-2 victory back on June 30. They’ve climbed up to fifth place in the Western Conference and show now signs of slowing down. There’s still quite a ways to go in the season, but the Sounders are beginning to look like the team that won back-to-back Western Conference titles and one MLS Cup in the last two seasons.