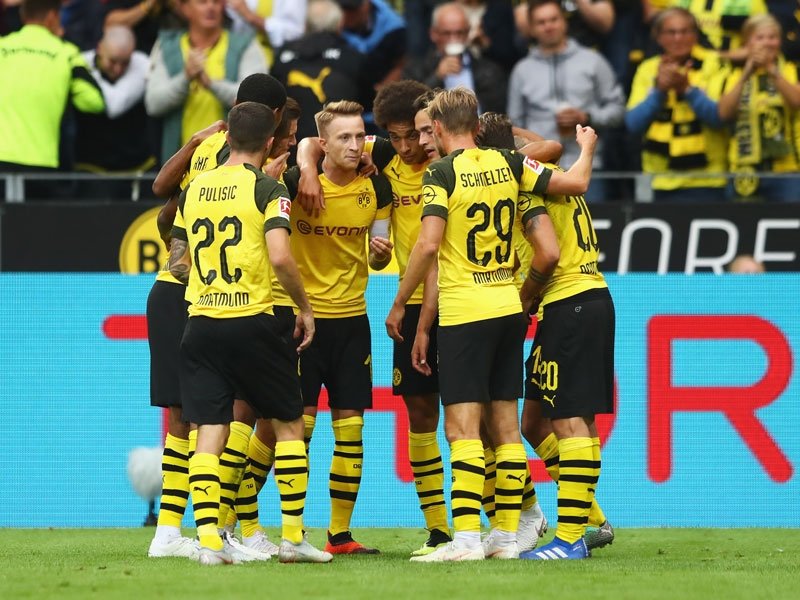 Borussia Dortmund’s start to the new Bundesliga season may not have started on the right note but it sure ended on a positive note.

Lucien Favre’s men overcame an early deficit to roll past RB Leipzig 4-1 at Signal Iduna Park. Jean-Kevin Augustin opened things thirty seconds in for Leipzig, silencing the home fans early. Mahmoud Dahoud’s header in the 21st-minute leveled the score for Dortmund before a Marcel Sabitzer own-goal put Favre’s side ahead. Axel Witsel’s scissor-kick in the 43rd-minute extended Dortmund’s lead going into the halftime break. Marco Reus penciled his name on the scoresheet in second-half stoppage time as he slotted home on a fast break. The lopsided win puts Dortmund atop the Bundesliga table after the opening weekend, while Leipzig are bottom.

Elsewhere, Chelsea used a late own-goal to down Newcastle United on the road, while Fulham routed Burnley in London. Real Madrid traveled to Girona in La Liga play. Inter Milan had to settle for a point at home against Torino. Mainz edged Stuttgart in Bundesliga action, while Monaco suffered a shocking loss on the road in France.

Chelsea made it three wins on the spin to begin their EPL campaign, as the Blues downed Newcastle United 2-1 on Sunday. It took Maurizio Sarri’s side while to break down the Magpies, but Eden Hazard broke the deadlock with a penalty kick in the 76th-minute. DeAndre Yedlin’s cross in the 83rd-minute found the head of Joselu, who equalized for Newcastle. However, Yedlin would feel hard done by just four minutes later as Marcos Alonso’s shot hit off the defender’s leg and went in for an own-goal. Chelsea sit second in the EPL table as of now, while Newcastle are 16th and winless.

Fulham grabbed their first victory of the new season, routing Burnley 4-2 at Craven Cottage. Jean Michael Seri opened his scoring account for Fulham, rifling a right-footed shot into the top-right corner after four minutes. Jeff Hendrick’s determination paid off in the 10th-minute for Burnley as the midfielder slotted in from close range. Aleksandar Mitrovic headed in Tom Cairney’s cross in the 36th-minute, before doubling his tally two minutes later from a similar header. James Tarkowski’s close-range finish made it 3-2 for Burnley going into halftime. Andre Schurrle’s right-footed finish in the 83rd-minute iced the win for Fulham, who travel to Brighton next weekend.

Espanyol earned their first victory of the new season on Sunday, downing Valencia 2-0 at home. Esteban Granero’s free-kick broke the scoreless deadlock in the 62nd-minute, before the hosts added an insurance goal minutes later. Borja Iglesias slid home Espanyol’s second of the half, which iced the win for the home team. Valencia was held to four shots on goal, and remain winless to start the new season.

FSV Mainz sent their fans home happy as they downed Stuttgart 1-0 at Opel Arena. Anthony Ujah’s 76th-minute goal was all the hosts needed to claim their first three points of the season. Both teams had three shots on goal, but it was the hosts who made their chances count. Ujah, rejoined Mainz from Liaoning Kaixin and rewarded the club with his first goal in two seasons.

Torino spoiled Inter Milan’s home opener on Sunday, fighting back for a 2-2 draw at the San Siro. Inter led 2-0 after 32 minutes with Ivan Perisic and summer acquisition Stefan de Vrij each finding the back of the net. Andrea Belotti cut the deficit in half for the visitors, being sprung by Iago Falque on a fast break and sliding his effort in. Soualiho Meite baged his first goal for the club in the 66th-minute which gave Torino a share of the points. Inter are in 11th place, while Torino is in 13th.

AS Roma hosts Atalanta on Monday.

AS Monaco suffered their first defeat of the 2018-19 season, losing 2-1 on the road at Bordeaux. Francois Kamano’s right-footed finish in the 92nd-minute sealed the win for Bordeaux after the forward gave his side a lead earlier in the half. Kamano’s penalty kick opened the scoring for the hosts after a scoreless first-half. Pietro Pellegri’s composed finish leveled the score for Monaco in the 63rd-minute but it was not enough for Leonardo Jardim’s side. After Samuel Kalu saw his penalty kick saved by Diego Benaglio, Bordeaux called on their danger man to seal the win.