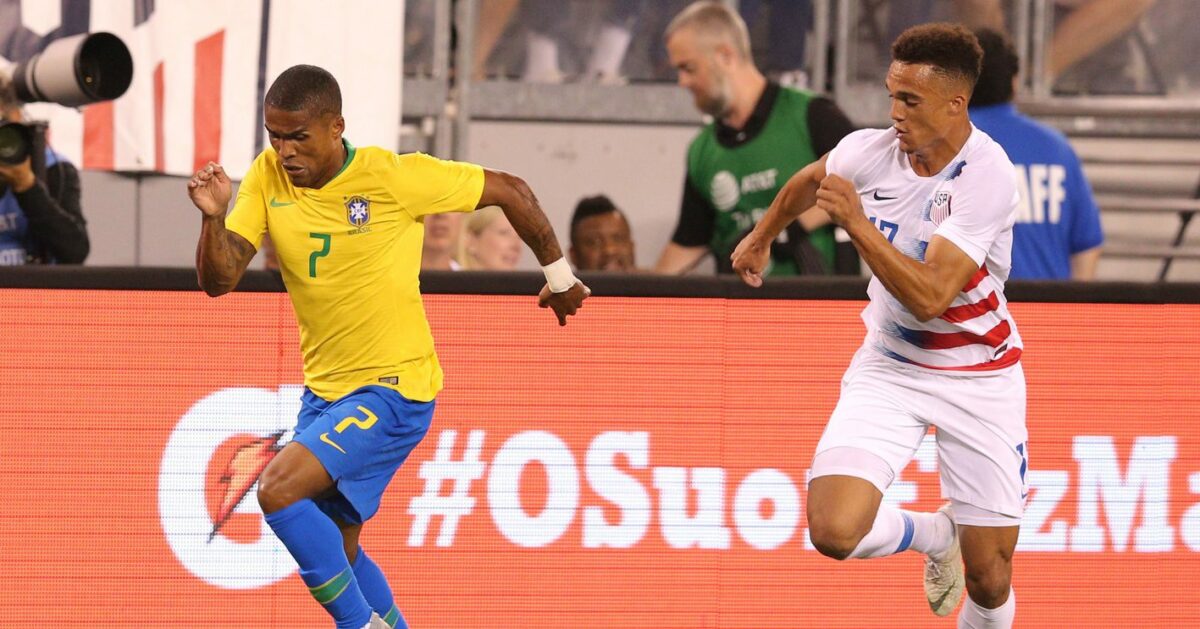 EAST RUTHERFORD, N.J. — The long problematic left back spot proved to be a weak point once again on Friday night for the U.S. Men’s National Team.

The U.S.’s slate of fall games started with a thud at MetLife Stadium, as star-studded Brazil cruised to the finish line in a 2-0 victory. The young American side as a whole was outmatched and not up to snuff on the day, but one player whose performance stuck out for the wrong reasons was Antonee Robinson.

Earning his third cap at the international level, Robinson was exposed badly early on in the game’s decisive play. He stuck with it and fought to bounce back, but still had a rough go of it during the opening 45 minutes before improving, like the rest of the team, after halftime.

On the whole, though, it was not a memorable performance for the 21-year-old fullback.

“It definitely wasn’t my best game, but it was a learning experience,” said Robinson. “Games like this against top teams, I’ve enjoyed every minute of it. As much a challenge as it was, I enjoyed the challenge and I’ve learned a lot from it.”

The biggest lesson he is probably taking away is the one he learned in the 11th minute on Brazil’s game-winning play. In that moment as the Brazilians were attempting to find space to exploit against the organized Americans, a ball was swung from the left side back to Marquinhos. The central defender then switched the point of the attack to the right flank, where the speedy Douglas Costa collected the ball 40 yards from goal. The inexperienced Robinson proceeded to make three damning mistakes in attempting to close down the space and mark the Juventus attacker, which paved the way for Brazil to find the back of the net.

Firstly and possibly most importantly, Robinson took a poor angle that provided Costa far too much space to run at down the sideline. Secondly, the U.S. left back got too tight in a position on the field in which he could have afforded to play off a bit. Thirdly, he approached Costa without getting his feet set and made himself vulnerable prey.

A quality and well-seasoned player, Costa instantly recognized all this and took full advantage, not with typical Brazilian flair but rather with speed. He simply pushed the ball down the sideline and smoked Robinson, creating enough space to hit an appetizingly accurate low cross that an unmarked Roberto Firmino pushed home.

“I’d say it’s definitely a different type of speed,” said Robinson. “After about two or three steps,  he was already at full flow and I had to catch up to him late. Actual speed-wise we’re probably similar, but his acceleration was a completely different level so that’s when you’ve got to start adjusting your defensive position.”

Whereas some inexperienced youngsters might crumble after being so involved in giving up a goal, Robinson stated that he didn’t let the play linger in his mind and tried correcting his 1-v-1 defending for the rest of the match. Try as he might, though, Brazil went down his side a lot in the opening stanza with good success. He was also involved in the play that led to the questionable penalty kick that put the game on ice in the 43rd minute, though nowhere near to the same extent that he was on the opener.

“He had a good opponent,” said left centerback John Brooks. “Everybody could see it: Douglas Costa is a world-class player. [Robinson is] still young. He can still learn like everybody else on the team.”

Things ultimately changed for the better for Robinson in the second half as Brazil took the intensity down a notch. Robinson also benefited from Costa being removed in the 61st minute in favor of Willian, who had nowhere near the same amount of success in his battles with the young U.S. fullback.

Still, Robinson knows his performance left a lot to be desired. He will walk away from this match with some valuable lessons that should help him grow, but also with the knowledge that he has to put what he learned into practice quickly if he wants to continue to get the nod at the international level.

“I’d like to think that anything is possible and if I keep developing my game then I can be the starting left back,” said Robinson. “I doesn’t matter how old or young I am, it’s just about how I’m playing and that’s definitely something that I’m targeting.”