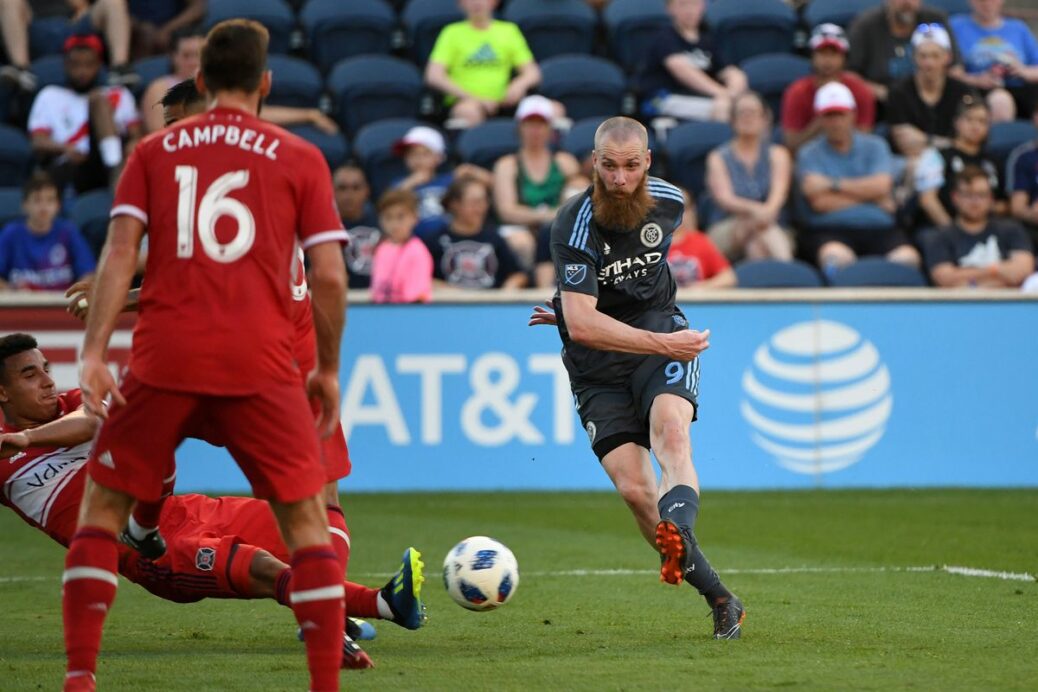 Jo Inge Berget has played a huge role in NYCFC’s attack since Domenec Torrent came aboard as the new head coach in June. However, without Berget in the lineup since he left with an injury shortly after subbing on in City’s 1-1 draw against the Red Bulls on August 22nd, the attack hasn’t been as dangerous.

NYCFC needed their attack to come through in a big way and in Berget’s first appearance in the Starting XI in a month, they found some life in their 1-1 draw at the Montreal Impact Saturday night.

The Boys in Blue needed a win to clinch a playoff spot but instead, they will have to go after it Wednesday night in the Bronx against the Chicago Fire.

“The injury didn’t bother me, and I didn’t feel anything to it, so it was a good 60 minutes to get back there,” Berget said after the match. “Obviously, we wanted more but still, if you look at away games, it is a step in the right direction.”

Berget played for 64 minutes and played a crucial role in the match’s opening goal. He was running into the 18-yard box as NYCFC was on the attack and Ben Sweat found him on the cross just outside of the six-yard box. Montreal’s Rudy Camacho, who was man-marking Berget’s run, slid and tried to deflect the cross out, behind the net. Instead deflected it into his own net.

“My job is to be strong and to make runs in behind,” Berget explained. “Maybe not to get a ball but to stretch them and to give a little bit of room to Maxi and David.

“On our first goal, that is exactly what happened. David got a little room and then he can pick those passes and then got a great cross in. And it ended in the back of the net. And that’s what we need to do even when teams are laying low. There is still space for those kinds of players to take advantage. And then it’s my job to do the dirty work and run around and I’m happy to do that.”

The goal was just the fourth for NYCFC during their current six-match winless streak.

Although Berget had an early impact on the match, NYCFC’s scoring woes continued Saturday night as they racked a season-low total of six shots (four on-goal). David Villa was unable to create anything, especially at the end of the match when NYCFC stayed in Montreal’s attacking third, trying to create a potential game-winning chance.

“You win games if you score goals,” Berget said. “It’s as easy as that. If you score many goals each game, you’re most likely going to win many games. And these last games we haven’t really scored. We created loads of chances. Maybe not today but the last few games. And we just can’t get it in the net.

NYCFC’s last win came on the road at defending MLS Cup champion Toronto FC on August 12. With two of their remaining four matches on the road at Minnesota and D.C., NYCFC is hoping that they can take positives from this match going into the regular season finale.

“We played much better the last three or four games away,” Torrent said. “The performance has been much better.”

“I thought it was one of our better road performances in the recent run of games we’ve had,” goalkeeper Sean Johnson said. “Obviously disappointing to go up 1-0 and then not be able to close out the game out. But I thought there were some good things tonight. But we’re still trying to figure out how to get that elusive away win, so we’ll get back to it.

“We have another away game next weekend. But the positive is we can take a lot of things going into Wednesday’s match against Chicago.”