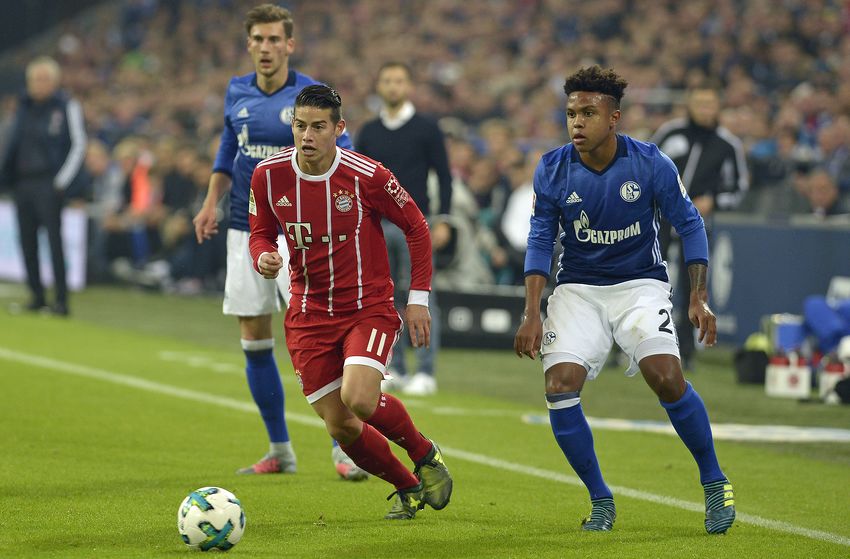 It’s been eight years since Schalke got the better of Bayern Munich in Bundesliga play, and the two will meet again on Saturday as the hosts try to upset the defending champions in Gelsenkirchen.

Schalke has yet to win in league play this season, but is coming off a 1-1 draw midweek in their opening match of the UEFA Champions League group stage. U.S. Men’s National Team midfielder Weston McKennie registered an assist in his UCL debut, despite Porto fighting back against the Bundesliga side.

Bayern looks poised to lift another top-flight title, winning convincingly in their opening three league matches. A 2-0 triumph at Benfica in European action has prepared them nicely after Robert Lewandowsi and Renato Sanches both bagged goals.

Elsewhere, Tottenham Hotspur looks to end a three-match losing run in all competitions at Brighton, while West Ham hosts Chelsea in a London derby. Napoli faces a tricky test in Serie A play at Torino to highlight this weekend’s action in Italy. Borussia Dortmund face Hoffenheim in Germany, while Lyon battle Marseille in Choc des Olympiques.

For the first time since Mauricio Pochettino has taken over at Tottenham, the team has lost three consecutive matches. Spurs will look to turn the tide on Saturday as they travel to Brighton & Hove Albion in Premier League play. A trio of 2-1 defeats in all competitions does not look good for Spurs, who are also coming off a dramatic loss at Inter Milan in their UCL opener on Tuesday. Harry Kane has been quiet for the Londoners, failing to find the back of the net during this losing run.

Brighton may be heavy underdogs to get a result but has drawn their last two matches against Fulham and Southampton respectively. Their only win this season came at the Amex against Manchester United back on Aug. 19th. 34-year-old Glenn Murray leads the Seagulls with four goals this season, including three in his last two appearances.

West Ham are coming off their first league win under Manuel Pellegrini and now prepare for a tough London derby at home against Chelsea. The Hammers used a brace from Andriy Yarlomenko on Merseyside which helped them down Everton 3-1 a week ago. Luck has been on their sides as well, defeating Chelsea at least once over the last three campaigns in total.

Chelsea has been perfect to start the season, claiming wins in their opening six matches through all comps. A 4-1 beatdown of Cardiff last weekend saw Eden Hazard roll his way to a hat-trick as the Blues remained unbeaten. Olivier Giroud registered a pair of assists in that win, and will be key against a streaky West Ham backline on Sunday.

Real Madrid will aim to claim all three points on Saturday, welcoming Espanyol to the Santiago Bernabeu. Los Blancos was held to a 1-1 draw against Athletic Bilbao on Sept. 15th, before rolling past AS Roma 3-0 in their UCL opener. Isco and Gareth Bale headlined the attack on Wednesday, and both should play a big role of Real want to have another comfortable showing this weekend.

Espanyol bounced back against Levante last weekend, using a Borja Iglesias winner in the second-half at home. If the visitors want any chance of walking out of Madrid with points, they will need to neutralize Real’s wing-play. Forward Leo Baptistao has the ability to spring Espanyol on counter-attacks, but the visitors need to make their chances count offensively.

Saturday’s action gets underway from Rhein-Neckar Arena as Hoffenheim tries to settle down in-form Borussia Dortmund. Julian Nagelsmann’s side drew 2-2 midweek in the UCL, earning a point away at Shakhtar Donetsk. However, in league play they will look for similar result against Dortmund like last year. Hungarian international Adam Szalai leads the team with three goals, and scored in this fixture last season.

Dortmund has yet to suffer defeat this season and has claimed a pair of wins over the last week in all competitions. A 3-1 beatdown of Eintracht Frankfurt was followed up by a 1-0 win over Club Brugge in European play. U.S. Men’s National Team midfielder Christian Pulisic returned to the Dortmund squad on Tuesday, scoring the winning goal in his 100th appearance for the club.

Headlining Serie A play this weekend is Napoli’s visit to Torino to kick off Sunday’s busy slate of action. Carlo Ancelotti’s side edged Fiorentina 1-0 last Saturday, behind a winning goal from Lorenzo Insigne. The win however did not propel Napoli to three points in their UCL opener on Tuesday, as they drew 0-0 at Red Star Belgrade. The dangerous front line for Napoli will be licking its chops to get after Torino, which they have beaten the last three times on the road.

Torino is unbeaten in its last three matches, recently drawing 1-1 at Udinese. However, the team only has one goal from forwards so far this season and that will need to change against Napoli. Andrea Belotti and Iago Falque are the likely starters up-top this weekend, with Simone Zaza hoping to play a part.

Two teams coming off midweek action will square off at the Luigi Ferraris on Saturday, seeking to continue their rise up the table. Sampdoria drew 1-1 against Fiorentina on Wednesday in league play, fighting back for a point against their rivals. Gregoire Defrel leads the team with four goals, including back-to-back braces on Sept. 2nd and 15th respectively.

Inter makes the trip to Sampdoria, looking to use momentum from a midweek thriller over Tottenham. Mauro Icardi and Matias Vecino each scored goals as Luciano Spalletti grabbed his first UCL win with the club. Now Inter tries to exact that performance against Sampdoria, who they whooped 5-0 in this fixture a season ago.

The latest edition of Choc des Olympiques takes place on Sunday with Lyon hosting Marseille off the back of a huge UCL win. Bruno Genesio’s side downed Manchester City 2-1 midweek away from home, with playmaker Nabil Fekir being instrumental in the triumph. Fekir scored a goal and registered an assist to help Lyon to the important win. Memphis Depay is also a player to watch this weekend with his pace out wide.

Marseille fell in their Europa League group stage opener at home, but will try to shake that off with a big win on Sunday. Midfielders Florian Thauvin and Dimitri Payet have totaled eight goals in league play this season and will be key if Rudi Garcia’s men want to spoil the party in Lyon.