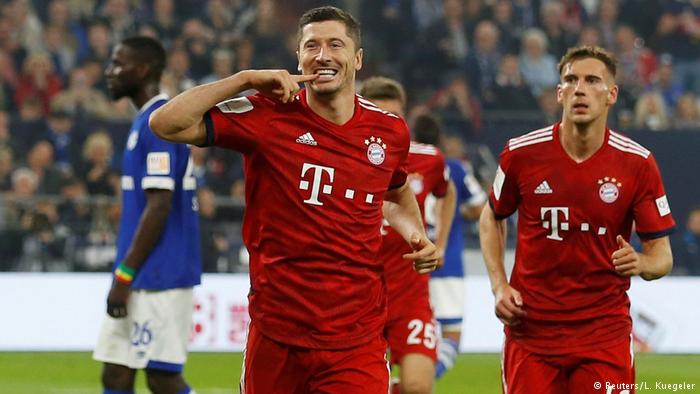 Bayern Munich has owned their rivalry with Schalke in Bundesliga play, and the defending champions added to that success on Saturday.

Goals in each half helped Bayern to a 2-0 league win in Gelsenkirchen and remain atop the Bundesliga table on 12 points. James Rodriguez’s eighth-minute header broke the deadlock as the Colombian scored his second goal of the new season. David Alaba’s 29th minute free kick struck the crossbar which was the other good look the visitors had in the first-half. U.S. Men’s National Team midfielder Weston McKennie had to leave the match in the 54th minute, after a collision with Rodriguez saw the youngster in tears holding his left leg. Robert Lewandowski doubled the lead in the 64th minute as he scored from the penalty spot after Rodriguez drew a foul from Alessandro Schopf. At the final whistle, Bayern had another road win to begin their domestic season.

Elsewhere, Liverpool remained perfect in EPL action while Arsenal had a comfortable win at home over Everton. Napoli rolled past Torino in the Serie A headliner on Sunday. Real Madrid blanked Espanyol at home on Saturday in La Liga action, while PSG eased past Rennes away from home.

Here’s a closer look at all of this weekend’s European results:

Liverpool remained perfect in Premier League play following their 3-0 beatdown of Southampton on Merseyside. The Reds scored all of their goals in the first-half as they cruised to another clean sheet. An own goal from Sebastian Hoedt in the 10th minute started the onslaught at Anfield. Joel Matip’s free-header in the 21st minute doubled Liverpool’s lead before Mo Salah tapped home his third goal of the season before halftime. Southampton was held to one shot on goal as they failed to win in back-to-back matches.

Arsenal used a pair of second-half goals to blank Everton 2-0 at the Emirates on Sunday. Following a scoreless first-half, the Gunners used a magical strike from Alexandre Lacazette to break the deadlock. The Frenchman’s right-footed strike off the crossbar in the 56th minute made it 1-0 to Unai Emery’s team. Lacazette’s strike partner Pierre-Emerick Aubameyang insured the win just three minutes later after the Gunners caught the Toffees out on a fast break. Petr Cech made six saves in the first Arsenal clean sheet of the 2018-19 season.

Real Madrid claimed their second victory of the week in all competitions, downing Espanyol 1-0 at the Santiago Bernabeu. Video review played a huge part in the match after Marco Asensio broke the deadlock in the 41st minute. The Spaniard’s left-footed strike found the bottom-right corner and video review ruled in favor of the goal. Los Blancos sat on their lead and hung on to remain second in the league table.

Barcelona had to settle for their first draw of the new season, tying Girona 2-2 at the Camp Nou. A Cristhian Stuani brace separated by six minutes apart had the visitors up 2-1 after 51 minutes. Lionel Messi’s opener came 19 minutes in for Barcelona before Clement Lenglet was sent off in the 35th minute. Gerard Pique played the hero for Barcelona, heading in the equalizer in the 63rd minute for a share of the points. Despite 11 shots on goal, Ernesto Valverde’s men finish the weekend tied on points with Real Madrid with 13.

Bayer Leverkusen grabbed their first league win of the season on their fourth attempt as they edged Mainz 1-0 at home. The hosts used a 62nd minute winning goal from Kai Havertz to seal their first three points of the season. The German headed home Julian Brandt’s cross past Florian Muller for his third goal in all competitions. Tomas Hradecky made five saves in the home clean sheet as Leverkusen move up to 15th.

Napoli bounced back from a quiet performance in Europe on Tuesday to roll past Torino 3-1 away from home. Lorenzo Insigne started and finished the scoring at the Olimpico Grande, scoring his first brace since April 2017. Insigne and Simone Verdi each found the back of the net as Napoli went into halftime up 2-0. Andrea Belotti’s penalty kick in the 51st minute cut the deficit to one for the hosts but it would be the only celebration they would have on the afternoon. Insigne’s 59th minute finish insured the road win for Carlo Ancelotti’s men.

Cristiano Ronaldo redeemed himself from his first ever red card midweek in the UEFA Champions League. The Portuguese star scored the winning goal as Juventus downed Frosinone 2-0 away from home in league play on Sunday. Ronaldo pounced on a rebound in the 81st minute and slotted in his third goal of the season. Federico Bernardeschi added an insurance goal in stoppage time to give Juventus a two-goal victory. Juve sit three points better than Napoli while Frosinone are in 19th.

Paris Saint-Germain remained perfect in Ligue 1 play, defeating Rennes 3-1 away from home on Sunday. Angel Di Maria’s 45th minute goal canceled out an own goal from Adrien Rabiot as the teams went into halftime tied 1-1. Thomas Meunier’s right-footed strike put PSG ahead for good, while Eric Maxim Choupo-Moting’s first goal of the season sealed the win later in the half. PSG sit on 18 points through their opening six matches, while Rennes are 14th.

In the latest edition of Choc des Olympiques, Lyon used a trio of second-half goals to down Marseille 4-2 at home. Bertrand Traore’s brace proved to be the difference while Tanguy NDombele registered a pair of assists. Florian Thauvin canceled out Houssem Aouar’s opener which saw the teams level at 1-1 going into halftime. Traore’s first goal came in the 51st minute as he beat Yohann Pele to the bottom-left corner. The Burkina Faso man scored the eventual winning in the 60th minute, this time beating Pele to the bottom-right corner. Nabil Fekir added a penalty kick goal in the 74th minute for Lyon while Clinton N’Jie netted a consolation for the visitors. Both teams are tied with 10 points apiece, with Marseille sitting higher on goal difference.