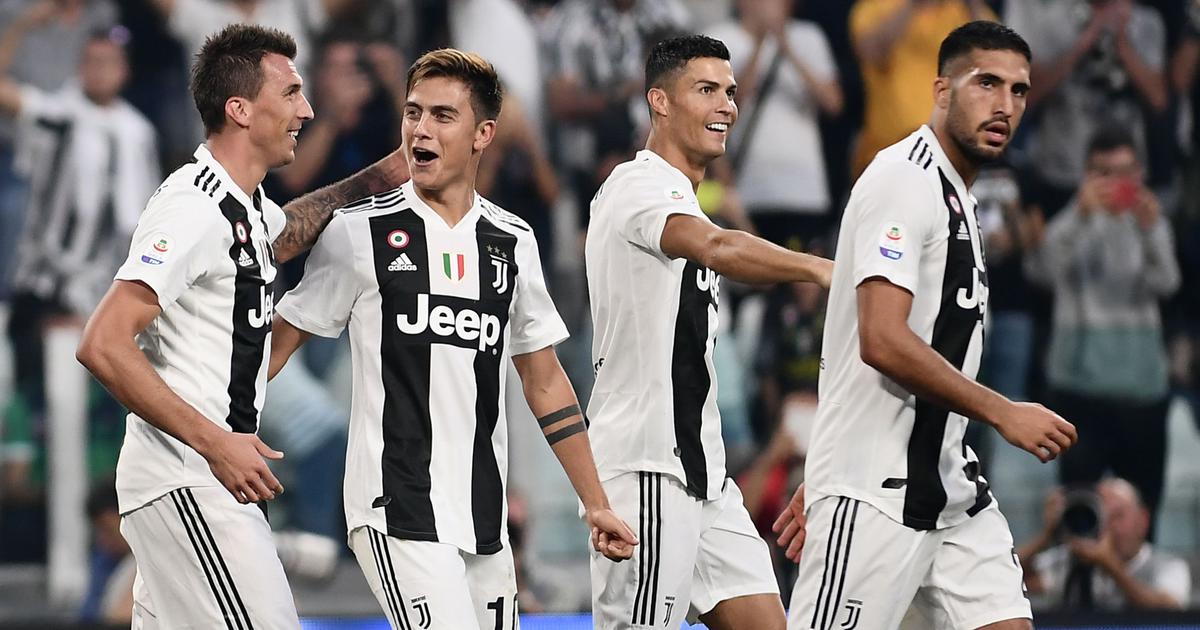 Juventus and Napoli are two sides that will surely battle down to the wire in Italy this season for the Scudetto. Saturday saw the Old Lady take the first meeting between the two sides in front of their home fans in Turin.

Juventus used a brace from Mario Mandzukic and a pair of assists from Cristiano Ronaldo to down Napoli 3-1 at the Allianz Stadium. Manduzkic’s first goal in the 26th minute canceled out a 10th minute opener from Dries Mertens which had the sides level 1-1 at halftime. It didn’t take the hosts to score the go-ahead goal early in the second-half. Mandzukic pounced on a rebound in the 49th minute and slotted in his second of the afternoon. Mario Rui’s sending off in the 58th minute hurt Napoli’s chances at a comeback and Juventus took advantage in the dying moments. Leonardo Bonucci finished Ronaldo’s assist in the 76th minute to kill the match off. The win sees Juventus move to six points clear of their second-place rivals.

Elsewhere, Liverpool escaped a second straight loss this week to Chelsea with a late equalizer at home. Manchester United’s league struggles continued with a shocking loss at West Ham. Borussia Dortmund fought back for a road win at Bayer Leverkusen, while Hertha Berlin downed Bayern Munich. PSG remained perfect in domestic play with a road clean sheet at Nice. Barcelona had to settle for a point at home against Athletic Bilbao.

Liverpool avoided a second defeat in four days to Chelsea as they drew the London club 1-1 at Stamford Bridge. For the second straight match, Eden Hazard scored for Chelsea, breaking the deadlock in the 25th minute. The Belgian now has six league goals in seven appearances this season. The Blues looked close to grabbing all three points but it was a former player who snatched a point for Liverpool. Daniel Sturridge’s long-range missile found the top-right corner in the 89th minute to keep the Reds perfect in domestic play this season. However, both dropped in the standings following Manchester City’s home win.

For the first time at the London Stadium, West Ham United handed Manchester United a defeat. The Hammers used a pair of first-half goals plus a late insurance strike to down the Red Devils 3-1 at home. Felipe Anderson’s fifth-minute finish paired with a Victor Lindelöf own goal had Manuel Pellegrini’s side up 2-0 at halftime. Marcus Rashford pulled one back in the 71st minute but it was the closest that Jose Mourinho’s side would get to a comeback. Marko Arnautovic’s 74th minute finish sealed the win for West Ham, their second out of their last three matches in league play.

Barcelona was unable to snap their three-match winless run on Saturday, settling for a 1-1 draw against Athletic Bilbao at home. Munir El Haddadi’s rebound goal in the 84th minute sealed a point despite Barca having to work very hard for a share of the spoils. Oscar de Marcos’ 41st minute finish gave the visitors a deserved lead and a shocking one at that. Despite eight shots on goal, Barcelona had to settle for a point and are level with Real Madrid on 14 points.

For the second consecutive season, Bayern Munich suffered a league loss in September. Niko Novac’s side was shutout 2-0 on the road against Hertha Berlin, dropping to second place in the league table. Vedad Ibisevic’s 23rd minute penalty kick broke the deadlock after Salomon Kalou was fouled by Jerome Boateng. Ondrej Duda’ right-footed finish before halftime put Hertha in cruise control for the remainder of the match. Thomas Kraft made five saves in the clean sheet for Hertha, which moved them to third in the standings.

Borussia Dortmund jumped to first place in the Bundesliga standings, scoring four in the second-half to down Bayer Leverkusen 4-2 away from home. Goals from Mitchell Weiser and Jonathan Tah had the hosts two goals to the good going into halftime. Jacob Brunn Larsen’s close-range finish sparked the comeback in the 65th minute, before Marco Reus leveled the score four minutes later. Paco Alcacer put Dortmund ahead on a breakaway in the 85th minute before the Spaniard sealed the comeback in stoppage time. Dortmund remains unbeaten while Bayer are in 14th.

The latest edition of Derby Del Capitale went the way of Roma as they downed rivals Lazio 3-1 on Saturday at the Olimpico. Pietro Pellegrini’s first-half finished put Roma ahead by one going into halftime, minutes after being subbed on. Ciro Immobile’s fifth goal of the season in all competitions, leveled the score in the 67th minute for Lazio. Aleksandar Kolarov’s sensational free kick in the 71st minute put Roma back in front before Federico Fazio headed in the insurance tally in the 87th. Roma are on 11 points through seven matches, while Lazio sit a point higher.

PSG remained one of two sides in Europe’s top five leagues to yet suffer a defeat, as they downed Nice 3-0 away from home. Neymar played the hero with a brace, giving him seven goals in seven appearances this season. His long-range effort in the 22nd minute broke the deadlock at the Allianz Riviera as PSG took a 1-0 into halftime. Christopher Nkunku’s left-footed finish a minute into the second-half doubled PSG’s lead ahead of Neymar’s second of the evening in stoppage time. Patrick Vieira’s men are in 13th place following the loss while PSG sit eight points clear at the top of the Ligue 1 summit.