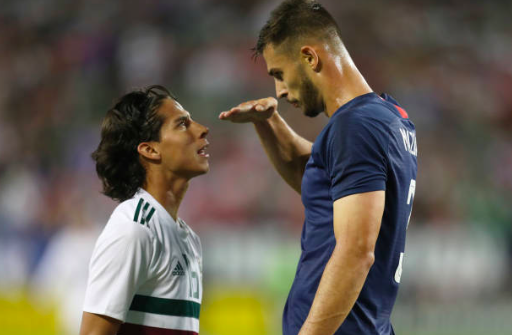 Mired in a tight rivalry match, Matt Miazga created arguably the most memorable moment of the U.S.’s showdown with Mexico on Tuesday night by taunting Diego Lainez in the 65th minute. The two players battled physically for a ball played down the right side of the penalty area and Miazga took exception to a late bump from Lainez, who was called for a foul.

The 6-foot-4 centerback proceeded to get in the 5-foot-6 attacker’s face, and then delivered some unforgettable trash talk by making an ‘I can’t see you’ gesture to poke fun of Lainez’s smaller height. The American’s mockery of the Mexican prompted a quick skirmish between the teams before Miazga continued to do the taunt for a few more seconds.

“What you guys see is normal,” Miazga said. “We talked a little smack. It’s part of the game. It’s mental warfare. We got in their heads and they got a red card right after.”

You can watch the full sequence here:

Miazga’s taunt did seem to get in the heads of the Mexicans, as they looked to have lost their collective cool in the immediate aftermath and got a red card two minutes later during the run of play when Angel Zaldivar went studs-up on Wil Trapp.

“Typical Miazga. I love that from him,” Adams said. “It gets the guys going. He’s not afraid to not back down against someone like that. At the end of the day, your teammates see that and you want to keep going, you want to back your guy up and the next tackle is obviously going to be a tough one so it’s another one that you want to win.”

The U.S. moved on from it all in a great way, with Adams bagging the winner in the 71st minute of the 1-0 victory to hand the Americans their first triumph over Mexico since April 2015.

Still, Miazga’s moment in the friendly may have been the biggest of the night. Even if it wasn’t, it will still go down in history next to the likes of Onyewu’s famous staredown of Borgetti from 2005.