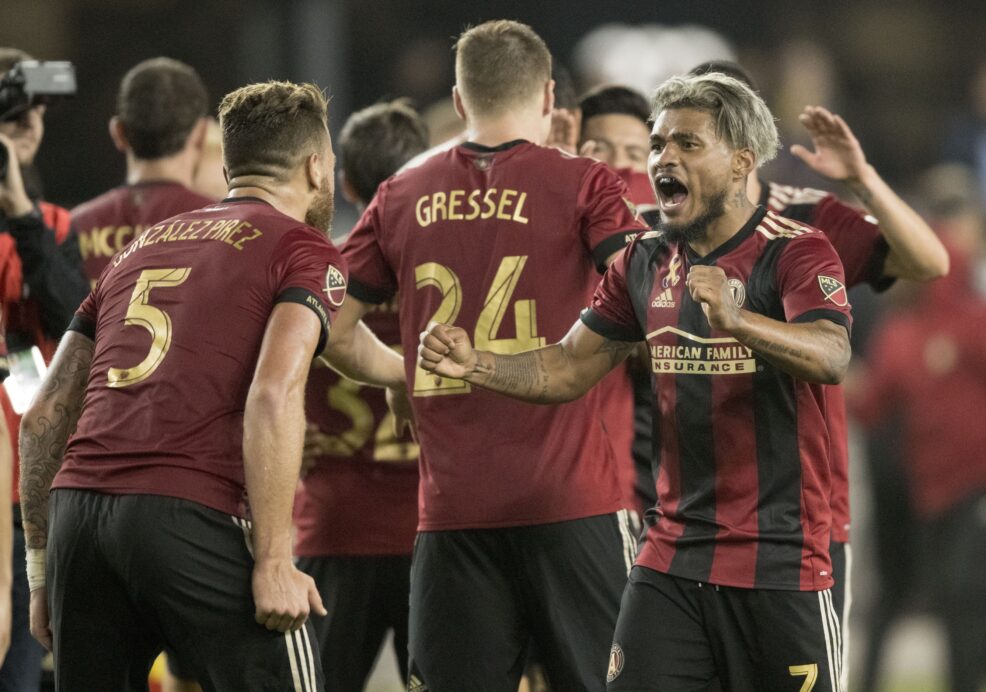 The biggest game of the weekend takes place at Red Bull Arena, where the Supporters’ Shield and No. 1 seed in the Eastern Conference can effectively be locked up by Atlanta United.

Elsewhere in the East, three games feature teams in fourth through ninth, which could lead to a major reshuffling of the standings come Monday.

Over in the Western Conference, a potential elimination game takes place between two teams directly beneath the red line,

Two other West showdowns feature top-six teams jockeying for position in the final weekend of September.

Below is a look at the full slate of games in Week 31.

We could find out on Sunday where the Eastern Conference playoffs, and potentially MLS cup, run through.

With a win over the New York Red Bulls, Atlanta United would move seven points clear at the top of the Supporters’ Shield standings and move one win away from clinching home-field advantage in the East.

Conversely, the Red Bulls could close the gap to one point and make the final three matches of the season more than interesting.

With Bradley Wright-Phillips suspended due to yellow-card accumulation, the Red Bulls will have to rely on Kaku, Daniel Royer and Alex Muyl more than usual.

While they face an uphill climb to victory at home, the Red Bulls have been able to pull out results against adversity in the past.

The top matchup to watch comes on the wings, as the Red Bulls must contain do-it-all full back/winger Julian Gressel, who has emerged as one of the most important pieces of the Five Stripes lineup.

The central midfield battle also pits experience versus youth, as Jeff Larentowicz faces off with Tyler Adams in a crucial battle to keep possession.

A home playoff game is on the line for the Philadelphia Union and Columbus Crew on Saturday at Mapfre Stadium.

The victor of the No. 4 versus No. 5 clash in the East will have an inside track to the No. 4 seed and the security of home field in the knockout round.

The Union have to find a way to rebound from their disappointing U.S. Open Cup final defeat on Wednesday, while the Crew are the fresher team and should look to pounce in the final third early as the Union grow into the game.

The movement of Gyasi Zardes, Justin Meram, Pedro Santos and Federico Higuain will be key for the Crew, as they look to take advantage of the Union’s back four that was torn apart by Houston’s skillful movement in the final third on Wednesday.

Two teams who have fired their head coaches and are holding on to a playoff dream meet at StubHub Center.

The LA Galaxy, who cut ties with Sigi Schmid at the start of the month, enter Saturday in seventh in the West with 41 points, while Vancouver, who let go of Carl Robinson this week, is one point behind in eighth.

A draw doesn’t do either team any good with Seattle sitting in sixth with 44 points, so expect an open affair with the loser essentially eliminated from playoff contention.

The Galaxy obviously have the ultimate X-factor in Zlatan Ibrahimovic, but their lack of defensive abilities could open the door for plenty of chances from the visiting side.

One of MLS’ most underrated rivalries gets renewed on Sunday night, with Real Salt Lake hoping to shake up the playoff structure in the West.

The Claret and Cobalt are currently chasing a home playoff game in fifth place with 45 points, two back of fourth-place Portland, while Sporting Kansas City is two back of first-place FC Dallas.

Both teams will be affected by Saturday’s result in Portland, and expect both to push the envelope given the need for three points.

There’s all sorts of intriguing battles throughout the field in this game, but Sporting KC’s experienced forwards against RSL’s young, but confident back line could be the one that tilts the balance of power in this one.

LAFC manager Bob Bradley returns to Chicago to face a Fire team he experienced a wealth of success with at the start of his managerial career in MLS.

The Fire have been relegated to the role of spoiler, but LAFC should have too much for the home side’s defense to handle over 90 minutes.

The expansion side is 6-6-2 on the road this season, and with the chance it could take advantage of dropped points by FC Dallas and Sporting KC in play, expect LAFC to easily take three points.

Seattle is in a similar situation to LAFC in Week 31, as it faces lesser opposition while the teams around it face difficult matchups.

The Sounders’ cushion above the red line should stay at three points, and given the inconsistency of the Galaxy and Whitecaps, it could grow if they draw in Carson on Saturday night.

Colorado’s players are playing for spots on the roster next year, and manager Anthony Hudson is possibly coaching for his job as well.

A surprising win at CenturyLink Field would turn heads, but it’s not likely since the Rapids haven’t taken points from their last five meetings with the Sounders.

Wayne Rooney’s elevated D.C. United to a position in which it can make the playoffs, but the late-season surge won’t be a thing if the Black and Red can’t beat Montreal at Audi Field on Saturday.

Ben Olsen’s side sits five points back of the sixth-place Impact with two games in hand.

Going eight points back of the Impact will be too insurmountable of a gap to close in October for D.C., no matter how many goals Rooney puts in the back of the net.

D.C. needs to limit Montreal’s presence on the counter, and it needs Luciano Acosta to be the driving force in the final third to split defenders and open up space for Rooney to finish.

First and foremost, New England and Toronto are D.C. fans on Saturday.

If D.C. wins, the Revolution and Reds gain a small sliver of hope to their diminished playoff hopes.

The Revs are in better position to pounce in that situation since they’re level on points with D.C., but a win by the Reds could set up an interesting stretch run that includes games against D.C. and the Impact.

New York City FC has been in playoff no man’s land for quite some time in third place in the East.

The key for Domenec Torrent’s men is to create momentum heading into the playoffs, which is something they’ve failed to do in recent weeks.

Minnesota United could be eliminated from playoff contention as early as this week, but the Loons will pose a difficult test for the NYCFC defense with the Darwin Quintero-led attack.

Houston salvaged its season with an Open Cup victory on Wednesday, but that’s about all it had to play for.

The goal for the Dynamo now is to finish strong and create momentum ahead of their 2019 Concacaf Champions League campaign.

San Jose is trying to build off playing proactive soccer for the first time in a long stretch last week.

A few results would go a long way for interim manager Steve Ralston, and the first of those could conceivably come at BBVA Compass Stadium.

FC Dallas has the opportunity to make a massive statement on Saturday by going into Portland and establishing itself as the top dog in the West.

With one of the easiest schedules in October, FC Dallas could use Saturday as a springboard to home-field advantage in the West.

On the other hand, the Timbers need a result at Providence Park, where they are 10-2-3, to feel more comfortable about their position in the standings.

The matchup that will decide the game comes in midfield, where Diego Chara and Carlos Gruezo will both try to spur their teams forward by controlling time on the ball.