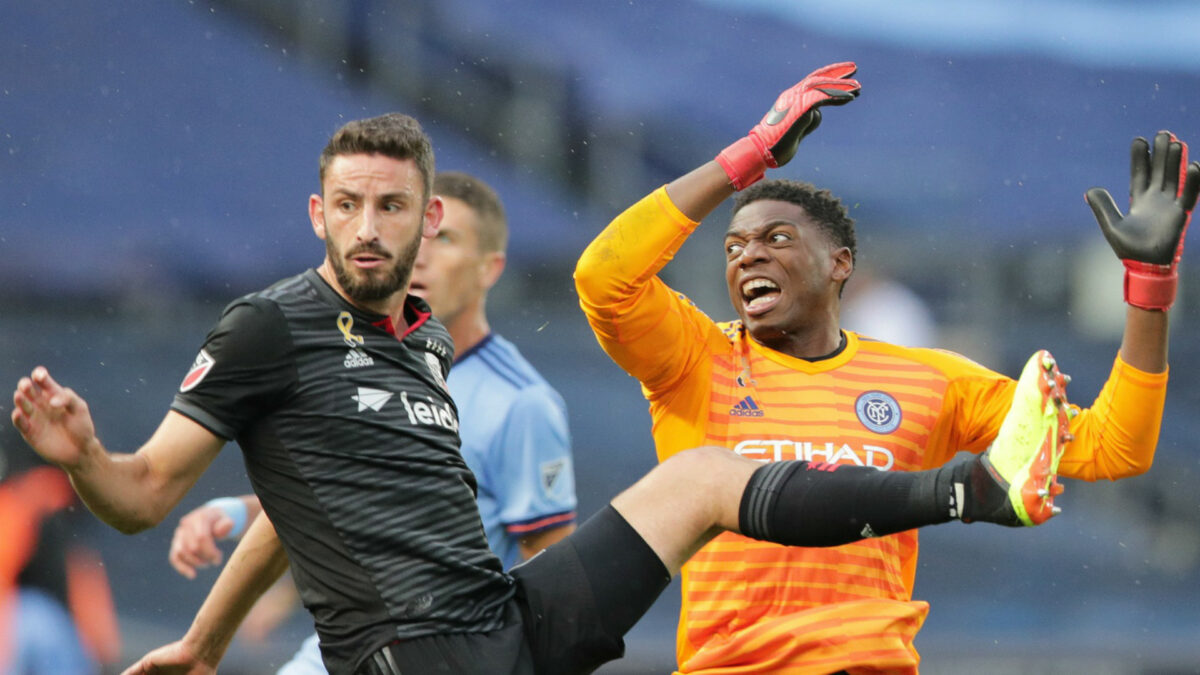 You would think NYCFC was on a roll entering the final stretch of the season from the way he’s handled himself as of late. Instead, NYCFC is heading in the opposite direction,

managing to pull a 1-1 draw against D.C. United Saturday night in the Bronx in a match where it once again missed numerous chances on goal. Chances that could’ve sparked a late rally for the Boys in Blue entering the final chapter of the season.

“I’m not happy just for the result,” Torrent said. “I said I’m proud of them because they played really well for me and for the effort until the last moment.

“We played two games in a few days and it’s not easy to play against United. That is the reason why I am very proud of them, of my players because they played much better and were able to create many, many chances. But, in the end, when you miss too many chances you bite.

David Villa curled a free kick just past the gloves of D.C. keeper Bill Hamid in the 86th minute to spark some life into the Blues and the just-over-28,000 reported at Yankee Stadium.

NYCFC’s only blemish came off of a free-kick from Wayne Rooney that looped into the box and found Steve Birnbaum in stride as he challenged City keeper Sean Johnson for the ball and headed it in in the 58th minute.

Besides D.C.’s lone goal, NYCFC played the aggressor throughout the majority of the 90 minutes. They just couldn’t finish their chances. Valentin Castellanos missed out on an early opening goal in the 11th minute, forcing Hamid into a strong save, Ronald Matarrita had a shot saved by Hamid in the second half and Maxi Moralez missed a near-equalizer wide of the far post.

“I don’t think they deserved a point,” Moralez said. “The ball was always on their half, but it’s one of those games where you make one mistake and you pay a big price and that’s what happened today.”

Although NYCFC is currently trending down on a five-game winless streak and, now, have won just one of their last eight matches, the atmosphere continues to be one of optimism and positivity, not desperation and frustration.

“These weren’t the best matches for us and that’s honestly all you need to keep yourself motivated,” defender James Sands added. “Obviously, the teams ahead of us keep winning, so we need to keep winning to keep up with them. So hopefully that’s all the motivation we’ll need to work hard in training.”

NYCFC remains in third place in the Eastern Conference with both the New York Red Bulls and Atlanta United ahead of them by six and five points with games in hand, respectively. But despite the stronger possibility of NYCFC hosting the sixth-seed in the knockout round in the playoffs, Torrent believes that the club’s ability to create chances gives them a chance to win the league title in December.

“It’s frustrating because we miss five points in two games at Yankee Stadium,” Torrent explained. “It’s no good for me for the players, for the fans, for the club, I know. But, believe me when I say we have more possibilities to try to win the MLS.

“If you want to improve and win the next game, the best way to play is if you’re able to play well,” Torrent said. “If you play like s**t like (in) Columbus, long ball, long ball, forget it. It’s impossible to win a game. But in that way, one day, pop, [the opponent] lack a chance and we’re able to score maybe four goals because we create chances for the first goal.”