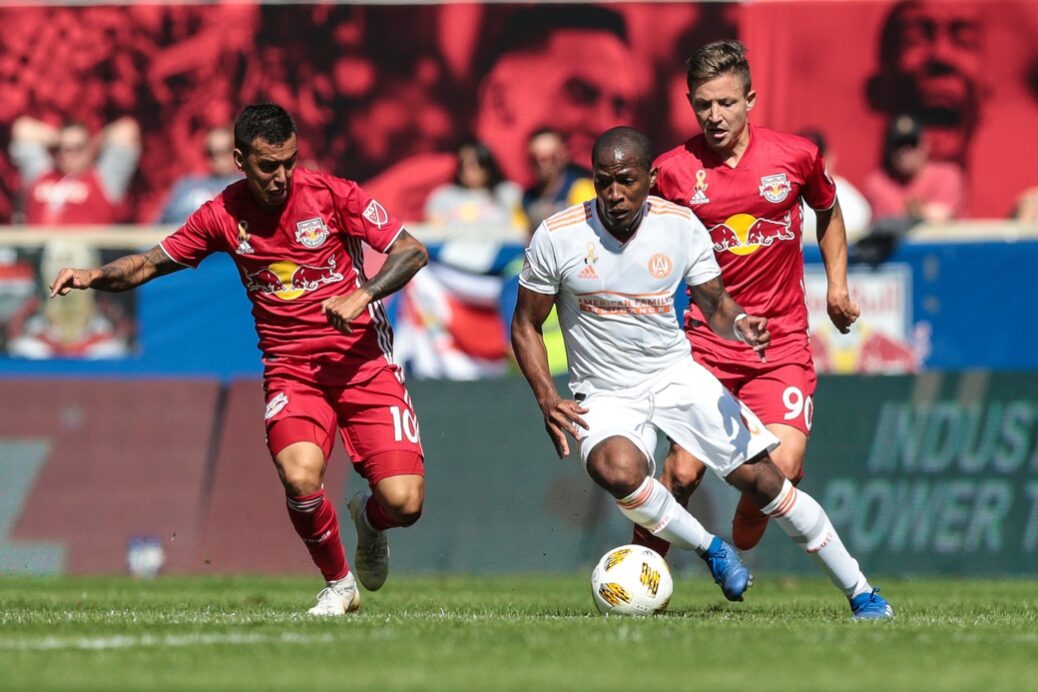 The weekend’s most awaited Major League Soccer match lived up to the hype, as the New York Red Bulls impressively collected a 2-0 victory over league leaders Atlanta United to leave just a one point gap between the two teams.

The Red Bulls went ahead through a 39th minute penalty. Atlanta’s Chris McCann committed a handball on a set piece, giving referee Robert Sibiga little choice. Daniel Royer easily finished from the penalty spot as Brad Guzan dove the wrong way for his 11th goal of the season.

It was a deserved lead for the hosts, who had perhaps played their most impressive half of soccer this season. Their well-known press was as effective as ever, leaving Atlanta with few opportunities to do anything with the ball. They managed a few opportunities on the break, as Miguel Almiron managed to make some important runs. However, they ended the half with just a single shot, compared to the Red Bulls’ seven.

The visitors fared much better to start the second half, limiting the Red Bulls in possession. However, they still had difficulty breaking through the Red Bulls midfield pairing of Sean Davis and Mark Rzatkowski, who were backed up by an equally strong center back pairing of Aaron Long and Tim Parker. Eventually, though, the Red Bulls got back into it and put the match to bed.

The insurance goal came in via Parker in the 75th minute, pairing up well with Alex Muyl. Rzatkowski cleverly found Muyl wide in the penalty area, and Muyl quickly placed the ball to Parker in front of goal. From there, it was a simple finish for the center back, who scored his first goal of the season.

The Red Bulls had an opportunity to go 3-0 up in the dying minutes of the match, though Kaku failed to convert a penalty. Referee Sibiga awarded the Red Bulls another penalty for a handball, but Guzan managed to make a fairly simple save on the midfielder’s attempt.

Still, it was perhaps one of the most impressive matches the Red Bulls have played all season, particularly considering their absences. They managed to shut down one of the best attacking trios in the league, and did so without the suspended Bradley Wright-Phillips and the injured Tyler Adams.

With this victory, the race for the Supporters’ Shield is still in full effect as the MLS regular season nears its end.

The Red Bulls managed impressive individual performances almost across the board, but Davis deserves a special shout. Paired with Rzatkowski, he and his partner proved tough to beat for one of the league’s best attacks, effectively playing the Red Bulls way.

Parker’s goal capped off a great day for himself and his team, and was an impressive collective effort. From Rzatkowski’s smart pass to Muyl to Muyl’s well placed cross, it was a goal that encapsulated the strong team effort.

Josef Martinez has enjoyed one of the most impressive seasons in MLS history, but he was entirely inactive against the Red Bulls. Credit belongs to the Red Bulls, but from delivery to finishing, it was not a strong day for the Atlanta attack.