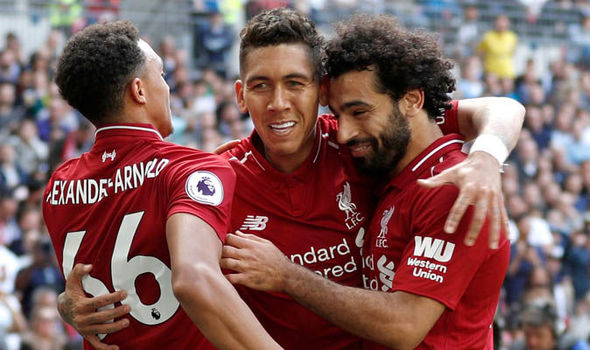 Liverpool continued their strong start to the Premier League season with a 2-1 road win at Tottenham on Saturday. Jurgen Klopp’s side picked up their fifth win in a row which has them sitting atop the league table.

Georginio Wijnaldum’s header in the 39th minute gave the Reds a 1-0 lead which they would take into halftime. Minutes after Lucas Moura struck the left post for Tottenham, Liverpool doubled their lead. Roberto Firmino’s close-range finish in the 54th minute extended the Merseyside club’s advantage. Erik Lamela pulled a goal back in stoppage time but it was a mere consolation for Spurs who have now lost back-to-back matches.

Here’s a closer look at Friday and Saturday’s European action:

Manchester United handed Watford their first league defeat of the season, holding on for a 2-1 success at Vicarage Road. The Red Devils used a pair of goals in a three-minute span in the first-half to take a two-goal lead. Romelu Lukaku netted the first in the 35th minute before Chris Smalling extended the lead three minutes later. Andre Gray cut the deficit in the 65th minute for Watford but it would not be enough in the end. Watford drops to fourth while United are in eighth.

Defending La Liga champs Barcelona remained perfect in league play with a 2-1 road win at Real Sociedad. Aritz Elustondo gave the hosts a first-half lead, scoring his first goal of the season in the 12th minute. However, Barcelona battled their way back in the second half through a pair of goals in quick succession. Luis Suarez leveled the score in the 63rd minute with a close-range finish before Ousmane Dembele put the visitors ahead in the 68th. Marc Andre ter Stegen made four saves in the fourth straight win for Ernesto Valverde’s side.

Bayern Munich returned to league play with ease as they defeated Bayer Leverkusen 3-1 at the Allianz Arena on Saturday. Corentin Tolisso’s 10th minute finish leveled the score after a fifth-minute penalty by Bayer’s Wendell had the visitors ahead quickly. Arjen Robben’s second goal of the season had Bayern up 2-1 going into halftime. Karim Bellarabi was sent off for Leverkusen in the 80th minute before James Rodriguez sealed the win in the 89th. Bayern moved back to the league summit with their third straight win.

Borussia Dortmund jumped to second in the table following their 3-1 home triumph over Eintracht Frankfurt on Friday. Abdou Diallo scored his first goal for the club in the first-half which had Dortmund ahead 1-0 at the halftime break. Sebastien Haller’s third goal of the season brought Frankfurt level in the 68th minute. Dortmund got a 72nd minute from Marius Wolf before Paco Alcacer netted his first goal as an insurance tally later in the second-half.

Napoli got back to winning ways on Saturday with a 1-0 success over Fiorentina. Following 70+ minutes of scoreless action, Lorenzo Insigne scored the eventual winner for Carlo Ancelotti’s side. The Italian’s right-footed effort found the back of the net in the 79th minute which sealed Napoli’s third win of the Serie A season. Fiorentina had to settle for their first league defeat of the 2018-19 campaign.

PSG kept their hold on the top spot in Ligue 1 with a 4-0 beatdown of St. Etienne on Friday. Julian Draxler’s first-half headed had Thomas Tuchel’s side up 1-0, a lead they took into halftime. Edinson Cavani stepped up to score a penalty kick in the 51st minute which was the beginning of a busy half for PSG. Angel Di Maria’s left-footed rifle extended the defending champs advantage in the 76th minute before Moussa Diaby netted his first senior goal later in the half. St. Etienne dropped to 14th following the lopsided loss.

Nice gave Patrick Vieira his second consecutive league victory on Friday, downing Rennes 2-1 at home. An own goal from Malang Sarr had Rennes ahead 1-0 after 58 minutes forcing the hosts to dig deep. Allan Saint-Maximin’s equalizer put Nice back into the match in the 77th minute before Pierre Lees-Melou scored the winner in the 89th. Nice sit in ninth on seven points while Rennes are a place higher due to goal difference.