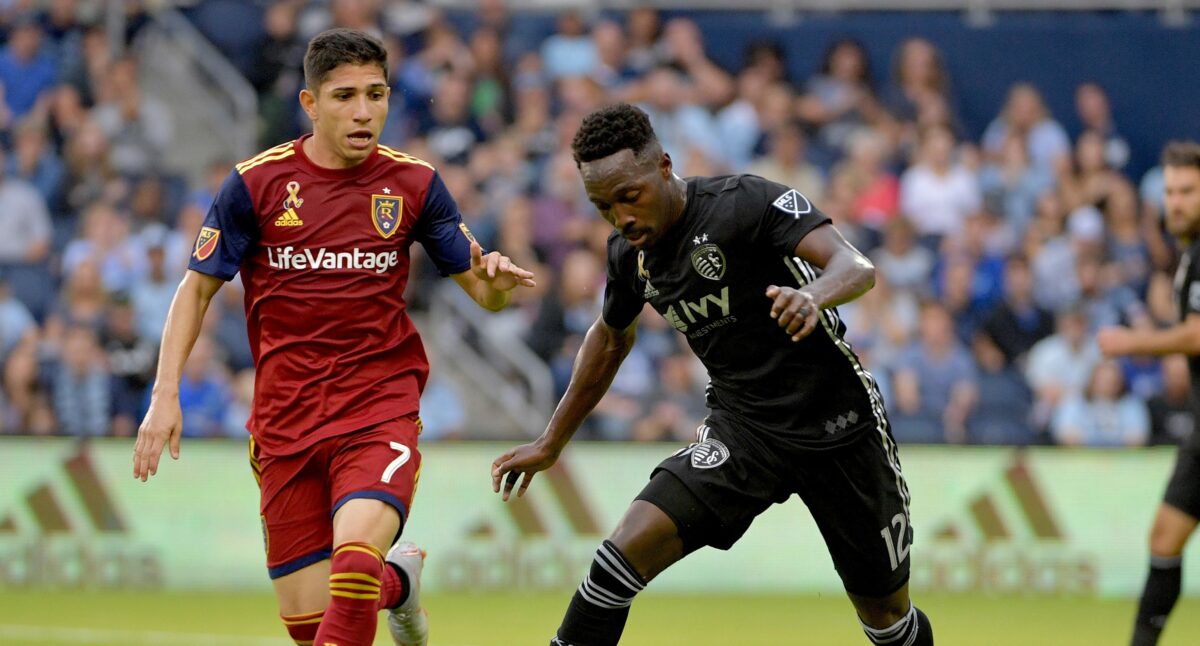 With playoff hopes on the line, Sunday’s 1-1 tie between Sporting Kansas City and Real Salt Lake left both teams with much to be desired.

Sporting Kansas City entered the contest looking to clinch a spot in the MLS Cup Playoffs with a win, while RSL hoped to put some space between them and the 7th place LA Galaxy.

SKC dominated possession early and looked to be the much stronger attacking side with multiple attacking chances in the first ten minutes, but it was Real Salt Lake that drew first blood.

Sporting KC’s high press left nearly all of its half of the field open, and a quick counter let Corey Baird get behind SKC’s back line, where he put the ball away in a one-on-one with Tim Melia in just the ninth minute.

Despite the goal, Sporting KC still looked the stronger side throughout much of the first half. Sporting KC was just inches away from an equalizer in the 18th minute as Nemeth missed a tap-in by inches. Johnny Russell had a fantastic chance four minutes later after Roger Espinoza played a brilliant through ball, but Nick Rimando came up huge and stopped what probably should have been a Sporting KC goal.

Sporting KC continued to press and looked to be on track for a goal, but RSL began to settle into the game and control the pace of play around the 25th minute, limiting SKC’s offensive chances.

After the half, SKC looked a bit more reinvigorated. Graham Zusi nearly found the net in the 48th minute when his cross deflected off Damir Kreilach toward goal, but Rimando acted quickly to punch the ball over the crossbar.

Just four minutes later Sporting KC finally equalized in the 52nd minute. Johnny Russell sent a corner kick into the box, and Ike Opara’s free header at the six-yard line went into the left side of the net to tie the game at 1-1.

Corey Baird had an opportunity to put put Real Salt Lake in the lead once again in the 73rd minute as Jefferson Savarino played him into the box, but Baird tried to chip SKC keeper Tim Melia, and the ball bounced harmlessly off the cross bar. It was RSL’s best chance of the second half by far.

Gerso had what looked to be a one-on-one chance with Nick Rimando in the 81st minute, but the forward’s touch was too strong and he couldn’t catch up to the ball before Rimando was able to make the sliding stop.

Rimando came up huge for Salt Lake once again in the 88th minute as he just stopped a hard strike from Sporting KC forward Diego Rubio that looked destined for the back of the net.

Sporting KC will surely look back on the match as a missed opportunity, as Sporting outshot Real Salt Lake 20-8 in front of the sold out crowd at Children’s Mercy Park.

Sporting KC stayed in second place in the West with 52 points after the tie, while Real Salt Lake remain just above the red line in sixth place with 46 points.

Man of the Match: Nick Rimando’s six saves kept Real Salt Lake in the game despite a solid performance from Sporting KC. Without his performance RSL is likely leaving Kansas City empty handed.

Moment of the Match: Had Corey Baird capitalized on his second one-on-one opportunity of the game in the 73rd minute, RSL might have escaped with the full three points. Instead, his missed chip attempt forced them to settle for the draw.

Match to Forget: Krisztian Nemeth returned to Kansas City with lots of hype following his success with the club in 2015, but he might as well have not been on the field on Sunday. In 71 minutes of action, Nemeth had just three shots on 11 total touches.