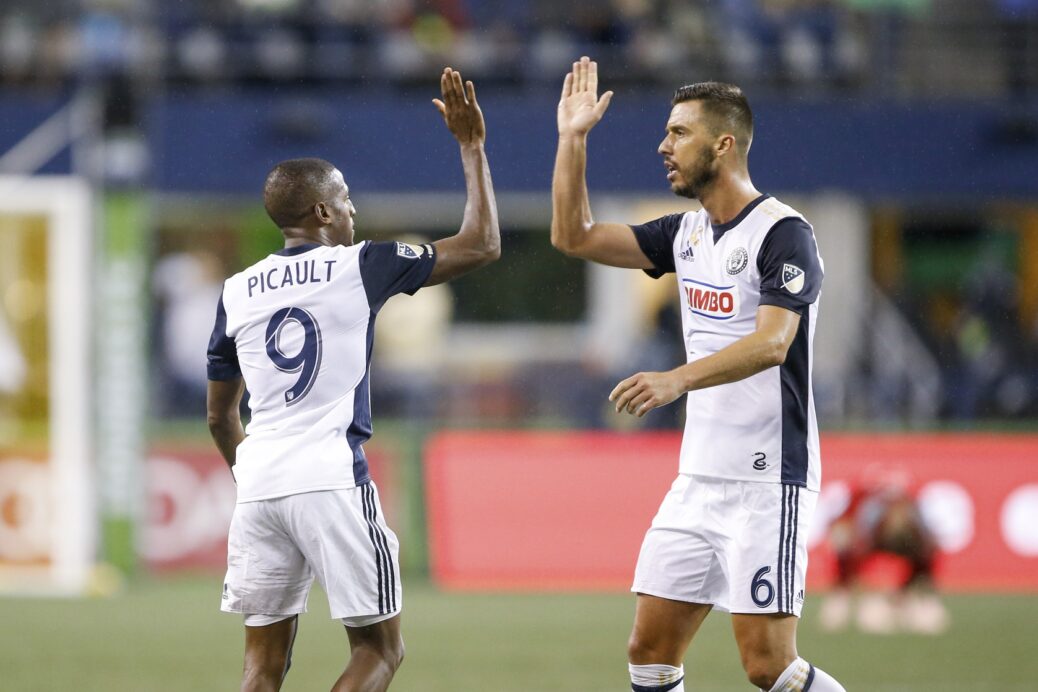 The best way to get over a disappointing result is to go out and fight till the very end, no matter who the opponent is. The Philadelphia Union did just that on Wednesday evening and were rewarded with a massive three points away from home.

Jim Curtin’s team used a 93rd-minute winning goal from Fafa Picault to shock the Seattle Sounders 1-0 at CenturyLink Field. Poor play out of the back by Sounders keeper Stefan Frei allowed Picault to pounce and slot past the veteran for the lone tally in the match. It was a result that the Union had to work extremely hard for, while also getting a little bit of luck to go their way.

“Couldn’t be prouder of the guys to come here and get a result,” Curtin said. “Seattle is a very good team and coming to a hostile environment isn’t going to be easy to pick up wins. We changed our tactics and sat back while trying to go after them on the counter.”

“We weathered the storm in the first 15 minutes, took their best punch and kept going,” he continued. “As the game opened up we created some chances, and we knew our character was going to be shown after a disappointing result against Montreal and it looked more like us.”

Following a humiliating home defeat to the Montreal Impact five nights ago, the Union needed some life as they head into a busy weekend match back at home against Sporting Kansas City. Defensively, they were miles better against a Sounders team that totaled 21 goals during their recent nine-match winning streak. They escaped Seattle striking both the post and the bar in the opening 16 minutes, and held them to four shots on goal out of their 16 in total.

Despite only 35% of the match possession, the Union were able to take Seattle on full steam. Cory Burke showed his ability with a pair of first-half efforts, while Haris Medunjanin and Derrick Jones shut down attacking threats Cristian Roldan and Nicolas Lodeiro. The Seattle midfield was held to two shots on goal, something that doesn’t happen very often.

“It’s a strong group,” Curtin said, “the locker room is together. We showed some character tonight, even down a man late, Jay [Simpson] was called upon late and Fafa made a play. Even Derrick [Jones] and Haris [Medunjanin] had a busy job tonight of breaking passes up in the middle and had to recover more than normal. Credit to the guys for defending until the end and getting rewarded for it.”

Andre Blake made four saves for the Union, posting his ninth clean sheet of the season. The Jamaican international had a busy start to the match, but came up big when needed against one of the deadlier attacking fronts in Major League Soccer. Even at 0-0, Blake had a feeling that his teammates would create a good chance offensively if they continued to keep the Sounders at bay.

“We stuck to the game plan tonight and we knew that if we continued to keep Seattle off the scoreboard then we could get a goal,” Blake said. “Coming in we knew Seattle has a great front four and it was not going to be easy shutting them down. It was good defending from the guys and the whole team in general, even after we went down a man.”

Their sixth road win of 2018 now has the Union one point back of fourth-place Columbus in the Eastern Conference. With West leaders SKC coming to Talen Energy Stadium on Sunday, Curtin and his team will have to analyze things quickly before another busy week begins.

“Tonight was a good result but we have to keep looking forward with Kansas City coming in,” Curtin said. “We won’t have too much time to prepare especially with the Open Cup Final next week, so we just have to get back to work and go after it again.”