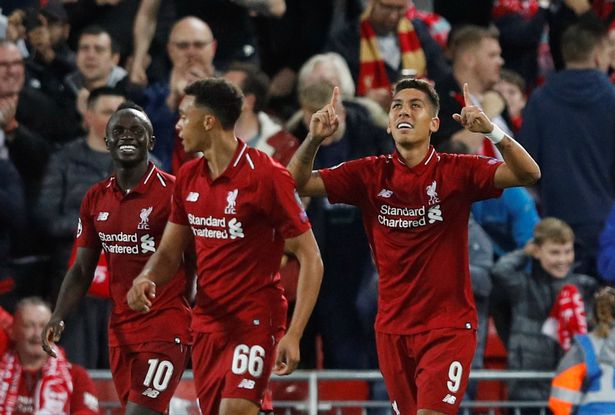 Elsewhere, Schalke had to settle for a point at home versus Porto while Napoli was frustrated in a road draw against Red Star Belgrade.

Here’s a closer look at all of Tuesday’s UCL action:

Daniel Sturridge was given a start thanks to a Roberto Firmino injury which saw him slide to the bench. The Englishman took full advantage of the situation by bagging the opening goal of the match in the 31st minute heading home a cross from Andrew Robertson. In the 36th minute, James Milner doubled the Reds lead from the penalty spot.

Thomas Meunier grabbed a goal in the 40th minute to give his PSG side something to build off of heading into the second half. It took some time, but in the 83rd minute Kylian Mbappe leveled the scoreline capitalizing on a misplaced pass in the midfield from Mohamad Salah.

Firmino came up with the winner in stoppage time as he produced a bit of magic, beating Marquinos in the penalty area before sending a low drive past a diving Alphonse Areola.

Barcelona opened their UCL campaign with an impressive win. As expected, the hosts controlled the tempo of the match with the Dutch side not being able to do much more than counter-attack. Messi led the way with a trademark free kick that saw his side head into halftime with a 1-0 lead.

Messi scored two more goals in the second half to complete the hat-trick while Ousmane Dembele also got on the scoresheet with a wonderful individual effort.

Samuel Umtiti’s 79th minute dismissal results in him missing Barcelona’s trip to Wembley Stadium for a Matchday 2 meeting with Tottenham.

On the other side of Group B, the San Siro played host to an exciting clash between Inter and Tottenham. The Italian side scored two late goals to grab three points over the London based club. After a scoreless first half, Christian Eriksen’s deflected shot gave Spurs the lead in the 54th minute.

Mauro Icardi flipped the script in the 86th minute with a wonderful volley from the top of the penalty area. Unfortunately for Tottenham, the goals were not done at that end of the pitch.

In the 92nd minute, Stefan de Vrij won a header off of a corner kick which he put back across goal. Matias Vecino was quickest to react and put the game-winning goal in the back of the net.

Two of Group A’s top teams met in France with Atletico Madrid leaving the Principality with all three points. After some good buildup play down the right side, Radamel Falcao dropped the ball off towards the top of the penalty area. After a few bounces, Samuel Grandsir got on the end of it to poke Monaco ahead in the 18th minute.

Antoine Griezmann did well to play Diego Costa through on goal in the 32nd minute and the Spaniard made no mistake, leveling things for his side. In first half stoppage time, Jose Gimenez rose highest on a Koke corner kick and headed the ball home. Atletico would hang on for a huge road win following a scoreless first-half.