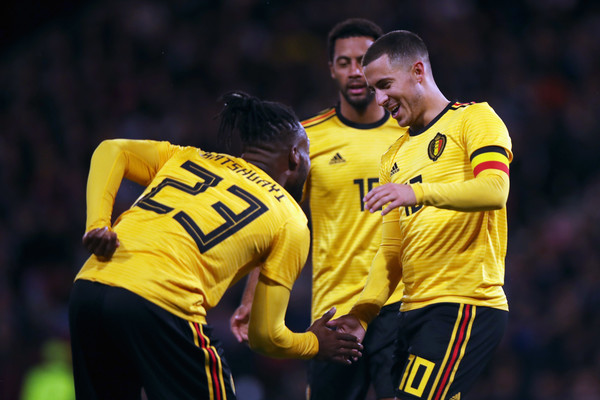 Matchday 2 of the UEFA Nations League finished up on Tuesday with Spain making a statement, Turkey forcing a late come-from-behind win, and a Cristiano Ronaldo-less Portugal taking three points over Italy.

Spain dominated Tuesday’s affair with World Cup finalist Croatia. Saul Niguez opened the scoring in the 24th minute getting on the end of a Dani Carvajal cross and he and his Spanish teammates never looked back.

Spain continued its goal scoring nine minutes later when Marco Asensio sent a left-footed rocket past a diving Lovre Kalinic. Minutes later, Asensio sent another left-footed shot towards goal, which hit the frame, Kalinic’s back, and then the back of the net all in that order. Asensio bagged three assists in the second half to give Spain a 6-0 win over Croatia.

Belgium picked up a 3-0 win over Iceland on Tuesday, as Eden Hazard and Romelu Lukaku returned to their World Cup form. The former opened the scoring in the 29th minute with a penalty kick before the latter scored just two minutes later, getting on the end of a set piece rebound.

Lukaku doubled his goal tally in the 81st minute, as he got on the end of a Dries Mertens cross. Iceland now sits bottom of its group with Belgium and Switzerland after losing both games and conceding nine goals to its opponents.

Sweden and Turkey played one of the most exciting games of the matchday, as Sweden conceded a pair of late goals that allowed Turkey to escape with three points.

Isaac Kiese Thelin got on the end of his own rebound after his headed attempt hit the crossbar to open the scoring in the 35th minute. Just four minutes after the second half whistle blew, Viktor Claesson’s long-range strike doubled the host’s advantage.

Unfortunately, it was all downhill from there for Sweden. Just two minutes after scoring, Sweden conceded thanks to a strong effort from Hakan Calhanoglu.

It went from bad to worse for the hosts, when Turkey equalized in the 88th minute after some good buildup play led to a close-range attempt for Emre Akbaba, who struck the back of the net.

Akbaba grabbed another goal in the 92nd minute to give Turkey its first lead of the match and its first UEFA Nations League win.

Portugal hosted the lone Group A game on Monday when Italy came to Lisbon. Despite not having Cristiano Ronaldo, the Portuguese were able to slide past Roberto Mancini’s men.

After a scoreless first half, Andre Silva netted a goal in the opening moments of the second half. In the 48th minute, Bruma picked up the ball and started an attack for the hosts. Once he got into the penalty box, he slid it to the No. 9 who made no mistake.