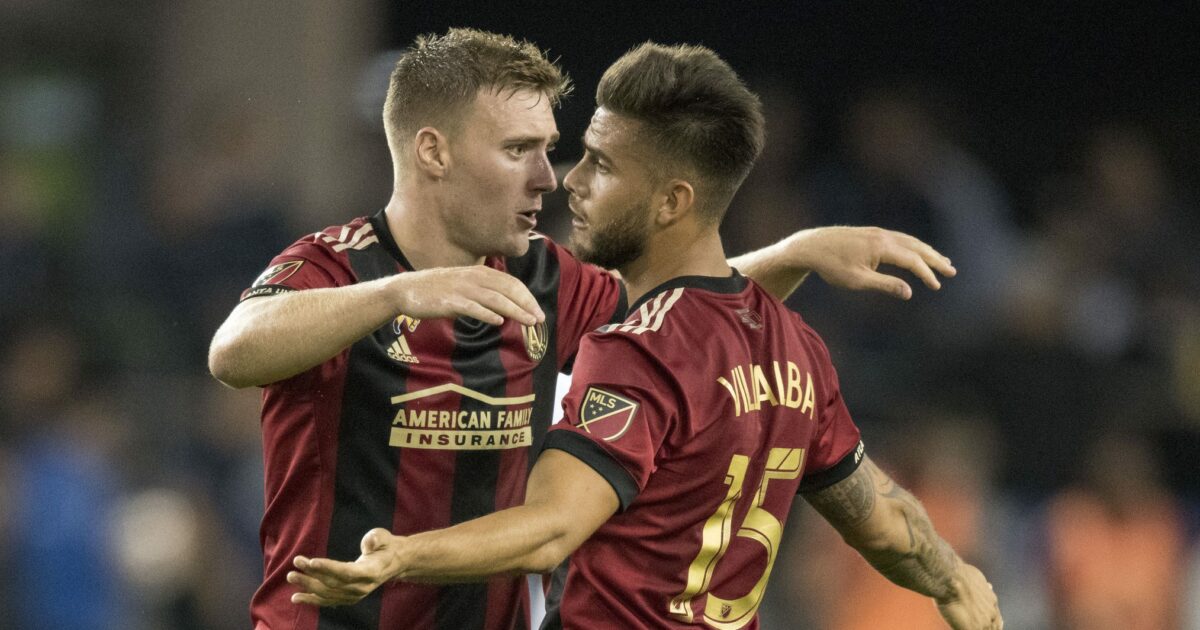 The Portland Timbers opened the night with a comprehensive win over the Columbus Crew, but the real fireworks of the night came in the Bay Area as Atlanta United came back from two goals in the second half to destroy the San Jose Earthquakes’ dreams of an unlikely comeback.

The Seattle Sounders also saw their winning streak come to an end at the hand of the Philadelphia Union. A late Stefan Frei mistake led to a Fafa Picault stoppage time winner to hand Seattle their first loss since the end of June.

Here’s the full rundown of the midweek MLS action:

The Portland Timbers got a much needed home win despite a slow start against the Columbus Crew.

Andy Polo would provide an assist and a fantastic goal to help lead his team to a 3-1 win over their foes from Ohio. His goal, the first of his MLS career, came from a remarkable individual effort. The Peruvian winger used his raw speed to run the ball from his own penalty area into the Columbus 18 before attempting a cross. His try was blocked, but it came right back to him and he executed a flawless flying karate kick to knock the ball into the roof of the net.

Things looked pretty ominous for the home side from the beginning, however. Niko Hansen opened the scoring pretty early on. In the seventh minute, he put home a pass from Milton Valenzuela after a rather rough play at the top of the box that may have been a foul against Columbus. Patrick Mullins came very close to a second Crew goal just minutes later when he got behind a lazy Portland defense, but he rolled his shot just wide of the far post.

Polo took over the game after that, though. In the 18th minute, he provided the cross that found David Guzman’s head on the doorstep for the opening goal, then he provided the individual fireworks for what turned out to be the game winner in the 37th. An own-goal off Lalas Aboubakar on a counterattack just three minutes into the second half and Hansen scored a consolation goal for the Crew with the last action of the match to finish the 3-2 scoreline.

Man of the Match: Andy Polo created the assist on Portland’s opener and found the game winner his first goal with the club in spectacular fashion. In truth, he probably could have had another goal and another assist had some extra bounces gone his way.

Steve Clark deserves a shot as well. His goalkeeping was top notch and helped maintain the Portland advantage throughout the game.

Moment of the Match: The Crew were dominating the match and were unlucky to have just the one goal before David Guzman scored the opening goal with his head in the 18th minute. It was all Timbers from that point on.

Match to Forget: Lalas Aboubakar not only spend much of the match getting torched out wide by Timbers attackers, but he knocked in the own goal that put the game out of reach.

The Philadelphia Union handed the Seattle Sounders their first loss in their last 12 matches thanks to a Stefan Frei goalkeeping error and a Fafa Picault finish.

There were a few chances for each side throughout the game, but it was heading straight for a 0-0 draw when the unexpected moment struck. Frei attempted to play the ball to his defense from in front of his own goal, but his pass was way off target and went straight to Picault, who slotted a shot through Frei’s legs to give the Union an unexpected three points.

Making things a little worse for Seattle was an injury to Raul Ruidiaz. He left the match near the half-hour mark after picking up an injury to what appeared to be his right ankle or right foot. Sounders head coach Brian Schmetzer turned to Will Bruin to finish things out.

The Union winner came despite being reduced to ten men late in the match thanks to Jack Elliot picking up his second yellow card in the 89th minute.

Man of the Match: Fafa Picault. The 27-year-old American looked fatigued down the stretch, but displayed a burst of speed to intercept Frei’s pass before cooly finishing between the goalkeeper’s legs.

Moment of the Match: Will Bruin’s miss in the 76th minute. The veteran MLS forward converts that cross more times than not.

Match to Forget: Stefan Frei. The Sounders would be nowhere without Frei’s heroics over the course of this season, but his turnover cost his team dearly tonight.

It looked like the San Jose Earthquakes would come up with an unlikely upset over the league’s best team, but Atlanta United came back from two goals down in the second half to steal all three points on the road.

Josef Martinez proved the winner in the fifth minute of stoppage time to complete the comeback and give the Five Stripes an even tighter grip on the top spot in the Supporters Shield standings.

Things started off strong for San Jose as they took the lead in the 13th minute when Nick Lima headed home a cross from Shea Salinas, beating Chris McCann at the back post. They doubled that advantage shortly before the break through Danny Hoesen. He fought off Michael Parkhurst for a loose ball, and after having his initial shot blocked by Guzan, regrouped and curled a shot over Guzan just before halftime.

Hector Villalba managed to pull one back for Atlanta just before the whistle, striking a beautiful shot into the top corner from 20 yards out to make it 2–1 at halftime.

The second half looked good at the start for San Jose as Vako made it 3-1 in the 58th minute by dribbling through the Atlanta United defense, beating four men in the penalty area before slotting a shot past Guzan.

Then things got crazy.

It looked like Chris Wondolowski is scored on a Quakes counterattack, but VAR got involved to take the goal away, and give Atlanta penalty. Josef Martinez converted the penalty to make it 3-2 San Jose.

Miguel Almiron tied the match in the 80th minute after Josef Martinez dribbled into the area and appeared to be fouled. With the referee playing advantage, Almiron pounced on the loose ball and slotted it home.

That set the stage for Martinez, who slotted home the winner deep into stoppage time to give Atlanta a determined victory in an away match all the way across the country.

Man of the Match: Miguel Almiron took over in the second half with a goal and assist to lead the comeback.

Moment of the Match: The VAR decision that took a Chris Wondolowski goal off the board that would have made it 4-1, and instead called a handball on the Earthquakes, which Atlanta converted to make it 3-2.

Match to Forget: The San Jose defense broke down late, and Harold Cummings was chief among the Earthquakes defenders who struggled late to deal with Atlanta’s attack.