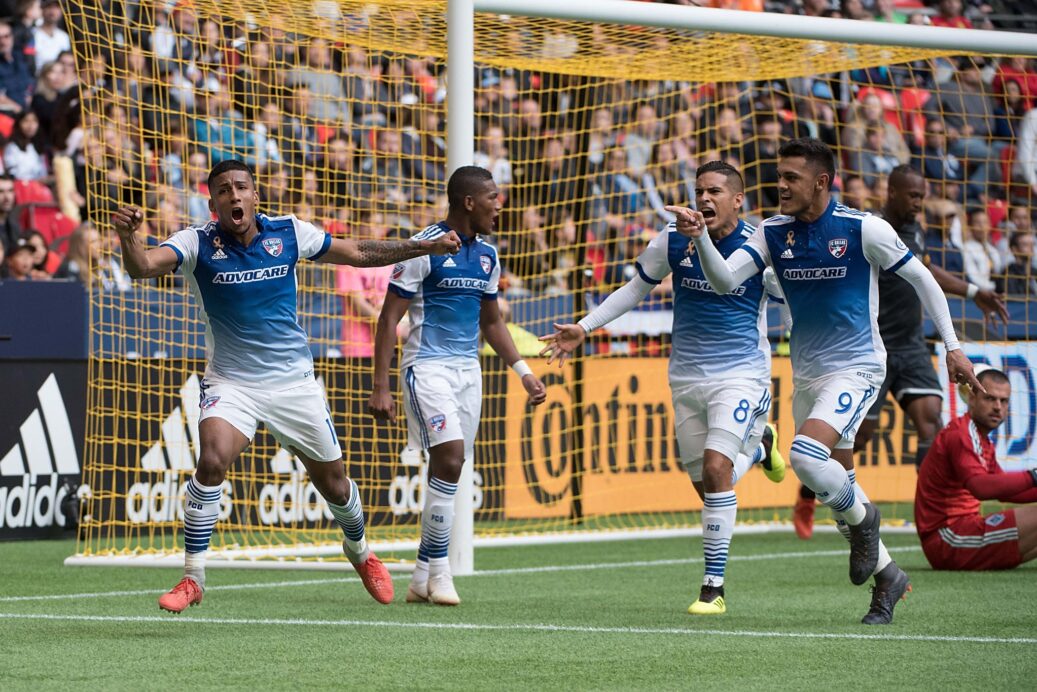 Eight points separate first-place FC Dallas from sixth-place Real Salt Lake, which means the final month of the regular season should witness plenty of fluctuation in the West.

With the Supporters’ Shield out of reach for FC Dallas and Sporting Kansas City, the main prize at stake is home-field advantage throughout the postseason.

Below is a look at where each team in the West playoff race stands ahead of the final month of play.

Remaining Schedule: vs. Orlando, at D.C., vs. Sporting KC, at Colorado

FC Dallas is the only club in the West to clinch a playoff berth.

Oscar Pareja’s men eliminated all talk about last year’s late-season slide by losing once in their last seven games.

The key game down the stretch for FC Dallas is the October 21 clash with Sporting Kansas City, which should decide the No. 1 seed in the West.

The only other tricky game on the schedule for the top team in the West is a trip to D.C. United on October 13 to play a team in need of points in the East playoff hunt.

Remaining Schedule: vs. LA Galaxy, at Vancouver, at FC Dallas, vs. LAFC

Sporting Kansas City faces one of the more difficult finishes to the season in MLS.

Games against the LA Galaxy and Vancouver Whitecaps might not seem too tough on paper, but both of those sides are fighting to stay alive in the chase for the postseason.

The October 21 trip to Frisco will be for the No. 1 spot in the West, while the Decision Day visit to LAFC could decide the second first-round bye.

Sporting KC is more than capable of navigating the tricky schedule and earning the 10 points necessary to steer clear of the knockout round.

However, if Peter Vermes’ side slips up at any point in October, it could fall as far as sixth place and set up an unfavorable knockout-round game.

Remaining Schedule: at Colorado, vs. Houston, vs. Vancouver, at Sporting KC

Regardless of what else LAFC achieves in 2018, its inaugural season must be ruled a massive success.

Bob Bradley’s led the expansion side into third place with a month to go, and there’s a real chance it will play at least one home playoff game.

Beating Colorado, Houston and Vancouver seems easy, which means LAFC could enter Decision Day with 59 points and a chance to clinch one of the top two seeds in the West against Sporting KC.

However, LAFC’s spot in the West is dependent on the results of the two teams above it.

So for right now, all LAFC can do is win the games it’s supposed to and hope an opportunity opens up to claim the No. 2 seed on October 28.

Welcome to the anything can happen portion of the West standings.

Just because the Portland Timbers are in fourth place at the moment doesn’t mean they’re safe.

The Timbers are four points clear of the red line, but their final three games come against teams beneath them in the playoff race.

The home-and-home series with Real Salt Lake will be vital for Portland to hold serve ahead of the Decision Day trip to Vancouver.

The one concern about Portland’s remaining schedule is it contains the worst road record of the top eight teams in the West at 3-7-5.

Remaining Schedule: vs. Houston, at Orlando, at Houston, vs San Jose

On paper, the Seattle Sounders should cruise into the playoffs and earn a home game in the knockout round.

The Sounders’ remaining schedule is far from difficult, as each of the contests come against teams out of playoff contention.

As long as the Sounders replicate some semblance of their form during their nine-game winning streak, they’ll finish no worse than fourth.

There’s potential for the Sounders to climb into third, but that’s reliant on how many points the top three teams produce in October.

Remaining Schedule: vs. Portland, vs. New England, at Portland

Real Salt Lake has the worst luck of any of the playoff contenders, as it will sit out Decision Day due to the odd number of teams in the league.

That means the Claret and Cobalt must record as many points as possible in their final three games to ensure they aren’t knocked out of the top six while they watch from home on Decision Day.

To feel somewhat comfortable, RSL needs seven points from its final three games, which means getting at least four from two games with the Timbers.

A win over New England on October 17 is mandatory if Mike Petke’s team wants to finish in the top six.

Remaining Schedule: at Sporting KC, at Minnesota, vs. Houston

There’s no way we should be talking about the LA Galaxy in this space, but because of Zlatan Ibrahimovic and Zlatan only, we are.

Simply put, the Galaxy shouldn’t be a playoff team with the dreadful defense they trot out to the field every week.

If they end up in the top six at the end of Decision Day, the Galaxy will have the most goals conceded of any playoff team.

In order to just have a chance to get in on Decision Day against Houston, the Galaxy need to improve their 4-7-4 road mark against Sporting Kansas City and Minnesota United.

It’s no easy task, but with Zlatan, anything is possible.

Remaining Schedule: at Toronto, vs. Sporting KC, at LAFC, vs. Portland

The Whitecaps enter October with three straight losses and no permanent manager after Carl Robinson was let go.

With six points to make up on sixth-place RSL, the Whitecaps are in a hole they most likely can’t get out of.

One loss along the way in October should bury the Whitecaps, even in a West where no one’s taken full control of the race for the final few positions.

Remaining Schedule: at Philadelphia, vs. Colorado, vs. LA Galaxy, at Columbus

Minnesota United is on the brink of being officially eliminated from the playoff race on Saturday if they don’t pick up three points against Philadelphia.

The Loons need a miracle and then some to even be in contention on Decision Day.

Houston faces the same predicament as Minnesota, as it must win out to even have a chance to make the top six.

With three of their final four games on the road, the Dynamo should start early preparations for the 2019 Concacaf Champions League instead of competing in the playoffs.