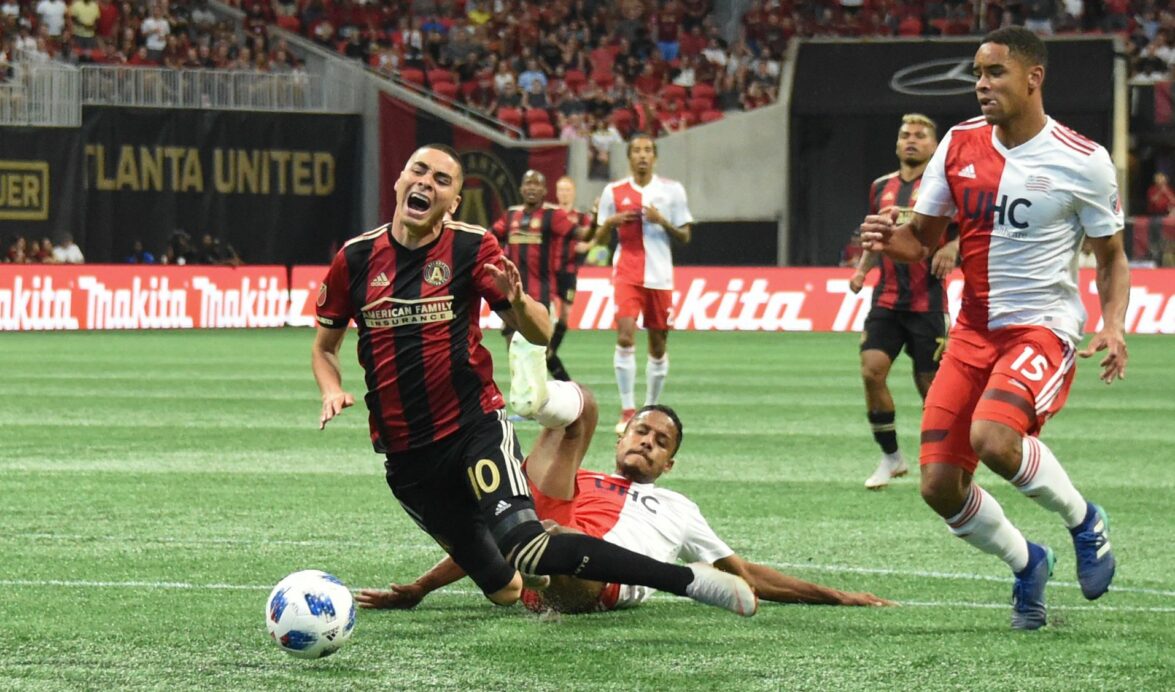 Not many players in Major League Soccer have been more influential to their team’s success than Atlanta United’s Miguel Almiron.

The Paraguayan international has been a crucial part of the Five Stripes’ success since their debut last season, and that trend continued into 2018.

However, Tata Martino’s side now expects to be without the playmaker for its final two regular season matches after Almiron exited Atlanta’s 2-1 win over the New England Revolution in the 30th minute. He was evaluated for a leg injury.

Almiron walked off the field under his own power, but he was seen covering his face as he went into the tunnel at Mercedes-Benz Stadium.

The Five Stripes went on to pick up their 20th league win of the season, keeping a one-point lead over the New York Red Bulls for the top spot in both the MLS Supporters’ Shield and the Eastern Conference.

“In regard to Miguel, he is having some tests done, and we won’t know the results until later. It seems like it was a muscular injury. I think the reaction from the team was good,” Martino said. “We played very solid in the first half. I think Miguel’s injury affected us as a team a little bit and also the fans. We lost some rhythm, but after that, we were able to get it back and score a nice second goal. The game was under our control until the very end when they scored a goal.”

Almiron has totaled 12 goals and registered 14 assists in his second MLS season, sitting in the league’s top ten in each category. However, the midfielder’s work ethic is second-to-none as he produces the same amount of energy both on the ball as he does off of it.

Playing without Almiron in matches against both the Chicago Fire and Toronto FC to end the season won’t be the worst thing if the Paraguayan is healthy for the start of the MLS Cup Playoffs.

Almiron missed three matches in 2017 due to injury, and the Five Stripes were still able to earn points in those matches. His absence may be a big blow, but it’s something that the players know they will have to prepare for.

“He’s Miggy, you know, like we want him on the field, but I remember last year this kind-of happened as well, and we were able to still win some games without him,” Atlanta midfielder Julian Gressel said. “It is what it is. We’ll move forward. We hope it’s nothing serious, and he’ll be back very soon because we want him on the field. Like I said, he brings a lot for us, but it is what it is, and we’ll just have to deal with it.”

“Everybody had to play better in 2017. Miguel is a guy that we rely on heavily. He can break pressure singlehandedly,” defender Michael Parkhurst said. “If you play the ball anywhere on the field with him, he is able to dribble past one guy and create space because he is so quick (and) so fast with the ball. If we are without that for any period of time, guys will have to step up. We will have to do a little more movement on the field, connect more passes probably, because we don’t have the outlet that he provides.”