Inexperienced backline holds its own against dangerous Peru attack 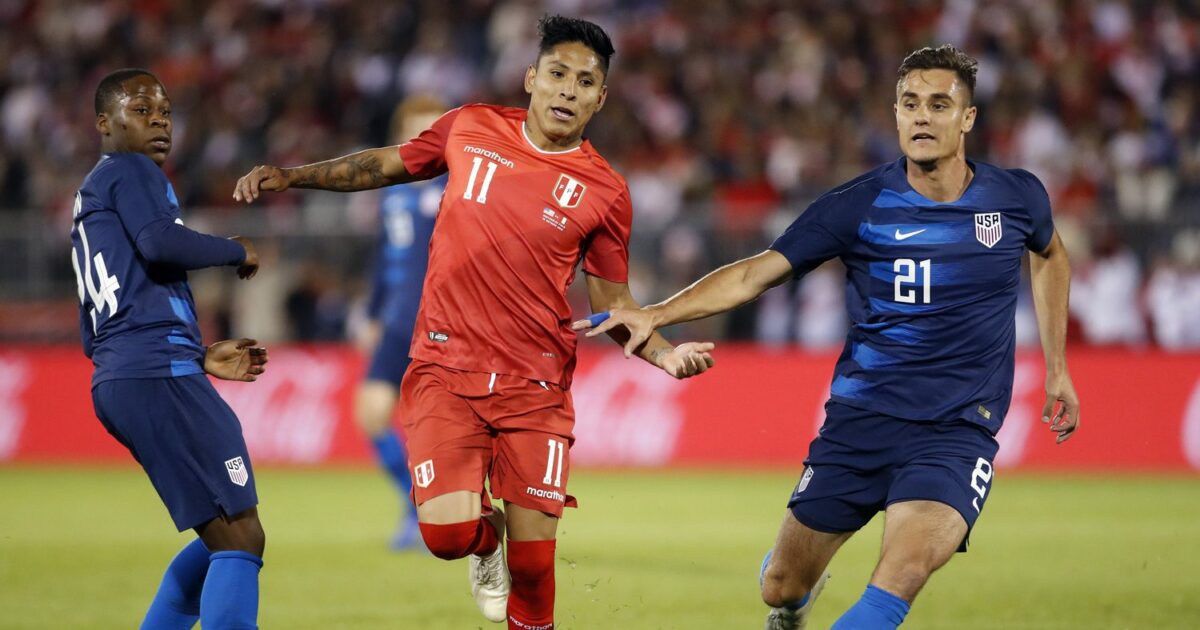 EAST HARTFORD, CONN. — Being able to give new players a chance to grow is key for any team to develop. Even if it’s against a dangerous side like Peru, fresh off a dominant friendly win and a place in this past summer’s World Cup.

The U.S. Men’s National Team held on for a 1-1 draw against the South American nation on Tuesday night, starting a backline that had a combined six caps coming in. Aaron Long and Reggie Cannon each earned their first caps for the National Team, while Ben Sweat got his first start and Cameron Carter-Vickers continued to get senior experience.

It was a busy first-half for the defense. They had to deal with Peru’s pace and skill while also trying to provide passes for a youthful attack. While many thought Dave Sarachan’s strategy was a big risk, the opportunity for these players to grow from this friendly was huge in their development.

“It’s always a question mark when you have some inexperienced players working together for the first time, but you hope that when the curtain raises, they get tuned in and don’t get too nervous on the occasion,” Sarachan said. “I thought there was some moments of indecision and some nerves but I think as the game went on, it got better. I thought that they got better as the game went on.”

Sweat came on as a substitute in the USMNT’s 4-2 loss to Colombia last Thursday, getting his first senior minutes. At 27-years-old, the NYCFC leftback has been good at club level this season, racking up over 2,100 minutes for the second consecutive year. With Antonee Robinson’s struggles as of late, and the left back position lacking depth, Sweat could see his number called more into November and beyond.

“I think it was pretty good. I think there were some up and downs in the first half. You have a bunch of new guys together in a new system and I think we had some careless mistakes, myself included, in the first half,” Sweat said. “We stuck together. We kept it 0-0. We went into halftime and regrouped and changed the system a bit. We went out in the second half and I thought everyone had a phenomenal second half.

“We defended really well. We attacked and created some good chances in the second half and it was a good standard. I think we have to watch the film, build off it and get ready for the next camp and make the small improvements.”

For the 20-year-old Cannon, his fight for a consistent place may be harder than most with DeAndre Yedlin holding the starting job at right back. The FC Dallas man has been terrific in MLS this season, totaling 31 appearances and over 2,700 minutes after just one appearance in 2017.

Getting his first start gave Sarachan and his staff a look at what could be Yedlin’s back-up for the future. Cannon’s pace gave the USMNT another option when they went on the offensive, while defensively he was able to make up ground and quiet Edison Flores on the left wing. In the end, Flores caught Yedlin sleeping after the Newcastle man replaced Cannon after 84 minutes to give Peru a late draw.

“I think coming out in the first half in our formation, it wasn’t as effective as the second half,” Cannon said. “The switch to a 4-4-2 in the second really helped our pressure and getting the ball. The first half we were chasing the ball around a lot. Me personally, I think the first half my head was spinning but I settled down as the game went on.

“It’s destiny in a way that the U.S. didn’t make the World Cup, cause now we have players that never would’ve dreamed of being here right now,” Cannon continued. “Making debuts and getting the experience, it’s a great feeling to make your first caps and getting time on the field. I think its good for the country overall to get as many players prepared for the future.”

Carter-Vickers and Long had the busiest task of the night: keeping tabs on striker Raul Ruidiaz for 90 minutes. Ruidiaz was held to zero shots on goal, being frustrated by the center backs in entirety. Like Sweat, Long has waited long for his chance to prove his worth to the National Team.

At 26, the New York Red Bulls man has been a top performer for the Eastern Conference club who is fighting for Supporters Shield and the top spot in the Eastern Conference. Like fellow NYRB centerback Tim Parker, who was capped earlier this summer, Long hopes that strong outings with his club team will continue to earn him reps at the national level.

“Definitely, I think if you take care of business with your club team then you will get your chances with the National Team,” Long said. “It starts there and you come here and these are the special nights you get to show off and play for your country.”

“Getting my first cap was extremely special, obviously it’s a huge moment for me” Long continued. “The result we are happy with, it’s a tie against a very good team that performed at the World Cup and a recent friendly against Chile. It’s a good team, we got ahead of them at times, we defended well but in the end it’s another building block towards the future.”