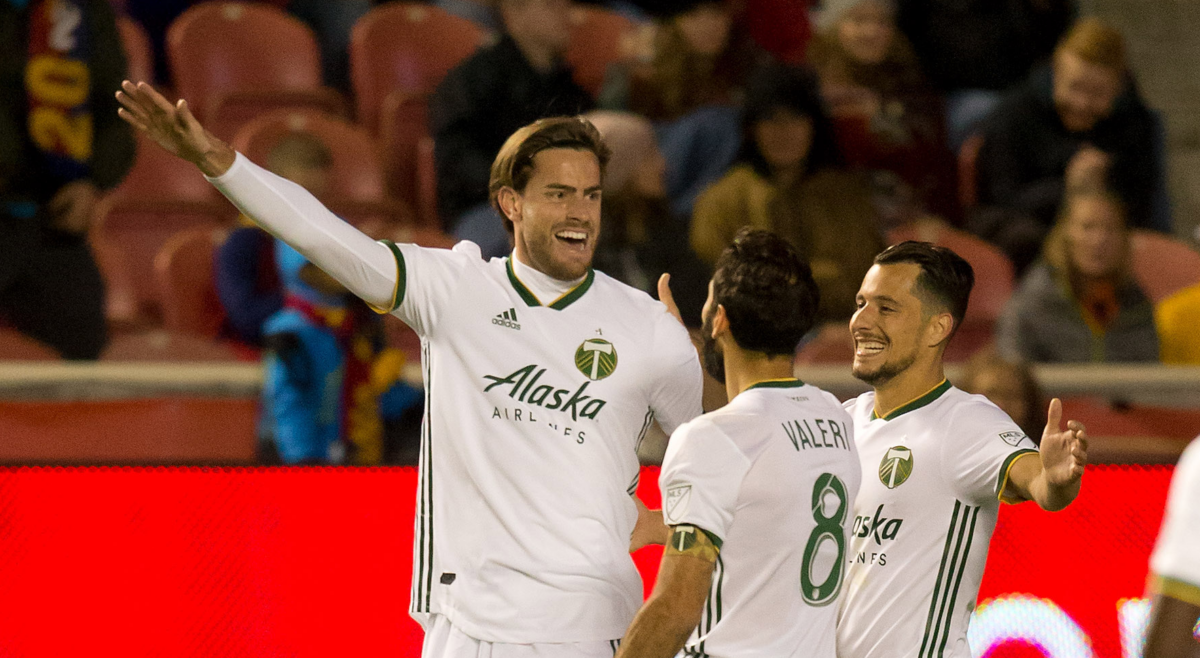 Playoff places are at stake this weekend across Major League Soccer with many teams looking to hang onto their spots above the red line.

Saturday’s headliner came from Children Mercy’s Park as Sporting KC and the LA Galaxy fought out a 1-1 draw despite some stellar goalkeeping from David Bingham.

Elsewhere, the Montreal Impact downed the Columbus Crew in a huge Eastern Conference showdown while the Philadelphia Union can clinch a playoff berth with a win over Minnesota United. The Vancouver Whitecaps eliminated Toronto FC from playoff contention with a road win at BMO Field.

Out West, the Portland Timbers scored a pair of quick goals late in the second half to earn a huge road win at Real Salt Lake. Los Angeles FC made quick work of the Colorado Rapids, and FC Dallas washed out Orlando City in Frisco, Texas.

The Montreal Impact extended their gap to five points clear of the red line, with a 3-0 beatdown of the Columbus Crew at Stade Saputo.

Columbus’ Josh Williams was whistled for handball inside of the box, and referee Alan Kelly rewarded the Impact with a penalty kick following video review. Saphir Taider stepped up and slotted past Zack Steffen to give the Impact a 1-0 lead after 32 minutes.

Alejandro Silva added a second just before first-half stoppage time. The Uruguayan pierced through the Crew’s defense before taking a shot outside of the box that beat Steffen towards the far post.

Nacho Piatti got in the act after halftime, beating Steffen with a low effort. The Argentine battled with Harrison Afful and eventually got his goal. Taider was again amongst the action, assisting on his second goal of the match.

Evan Bush made nine saves in the victory, which helped the Impact bounce back from last weekend’s thumping at D.C.

Man of the Match: Taider came up big for the Impact, scoring the first goal and assisting on the pair following.

Moment of the Match: Taider’s goal gave the Impact a deserved lead, but Silva’s goal put them in cruise control for the second-half.

Match to Forget: The midfield pair of Wil Trapp and Artur could not deal with the likes of Taider, Piatti, and Co. as they were caught out numerous times in the road loss.

Atlanta United continued their fight for the MLS Supporters Shield with a 2-1 home win over the New England Revolution on Saturday.

George Bello’s left-footed finish following a set piece gave the hosts a 1-0 lead in the 17th minute. It was Bello’s first MLS goal in his first start of the 2018 season.

Miguel Almiron exited in the 30th minute for Atlanta, after pulling his hamstring. The Paraguayan was replaced by Ezequiel Barco.

Julian Gressel extended the lead in the second-half, beating Brad Knighton to the bottom-left corner. It was the German’s fourth goal of the season.

Man of the Match: Gressel’s second-half proved to be the game winner in the end as Atlanta grabbed another home win.

Moment of the Match: The second goal for the Five Stripes truly gave them room to breathe.

Match to Forget: Cristian Penilla had only 10 completed passes and one shot on goal in the loss for New England.

In a battle of Canadian rivals, it was the Vancouver Whitecaps who put Toronto FC out of their misery.

The Whitecaps edges TFC 2-1 at BMO Field to eliminate the defending champions from postseason contention.

Russell Teibert’s left-footed strike in the fourth minute gave the Vancouver Whitecaps an early 1-0 advantage. It was Teibert’s first goal of the season.

TFC has not sat back though, creating four good looks towards goal. Michael Bradley and Auro have had the best chances offensively for the defending champs.

TFC was reduced to 10-men in the 66th minute when wingback Gregory van der Wiel picked up his second yellow card of the match. However, Jozy Altidore leveled the score in the 71st minute to give TFC a lifeline.

Kei Kamara’s 14th goal of the season helped Vancouver regain the lead  for good in the 78th minute.

Man of the Match: Kamara played the hero for Vancouver helping the Whitecaps exact revenge on TFC for their Canadian Championship final loss.

Moment of the Match: The finish by Kamara helped the Caps earn a huge three points in their slim hopes of making the postseason.

Match to Forget: Sebastian Giovinco was quiet in the defeat, which is something that doesn’t usually happen when TFC battles another Canadian rival.

It’s was one-way traffic at Talen Energy Stadium with the hosts clinching a playoff spot and setting a new club record for points in a season.

After missing from eight yards out earlier in the first-half, Union striker Cory Burke rifled a right-footed effort past Bobby Shuttlesworth in the eighth minute. Borek Dockal’s 16th assist of the season broke the team’s single-season record.

Alejandro Bedoya tapped in a second for the Union in the 17th minute after the midfield pounced on a great cross by Keegan Rosenberry. Dockal was also given an assist on the goal, giving him 17 this season.

Picault extended the lead to 3-0 in the 23rd minute, beating Shuttleworth to the bottom-left corner. The winger would double his tally before halftime, curling a right-footed effort into the top-right corner.

Darwin Quintero’s 11th goal of the season pulled one back for Minnesota in the 54th minute. A nice 1-2 between Quintero and Angelo Rodriguez was finished off by the Colombian past Andre Blake.

Ilsinho’s right-footed missile in the 80th minute continued the dominance by the Union this evening.

Man of the Match: Picault was a lively presence in what has been a good week for him. His goals were both well taken and he easily could’ve had a hat trick.

Moment of the Match: Picault’s second goal continued the rout in Chester.

Match to Forget: The Loons backline was horrid and failed to deal with the Union’s attackers.

Orlando City has had the better of the looks in Dallas but neither side has been able to break the deadlock.

Sacha Kljestan and Yoshi Yotun were also kept out, while the best look for FC Dallas came from the foot of Michael Barrios.

FC Dallas opened the scoring in the 63rd minute when Santiago Mosquera collected a Michael Barrios pass and finished past Joe Bendik from 15 yards out to make it 1-0 at Toyota Stadium.
Victor Ulloa made it 2-0 FC Dallas in the 69th minute when he headed a Maxi Urruti free kick past Bendik for his first goal in MLS play since 2016.
The match entered a weather delay when a torrential thunderstorm hit in the 80th minute. The deluge was enough to wash out the last ten minutes of the match and it ended 2-0.
Man of the Match: Victor Ulloa bagged the second goal and was a force in the midfield all match long,
Moment of the Match: Ulloa’s goal took any hope away from Orlando City.
Match to Forget: Sacha Kljestan was a shadow of his former self for the Lions.

David Bingham stepped up in a big way to help the Galaxy earn a big away point at SKC, but they may feel like they should have left with all three.

The LA Galaxy had a first-half lead at Children Mercy’s Park thanks to their leading goalscorer.

A sliding challenge from Tim Melia brought Ola Kamara down in the box in the 23rd minute, sending LA to the penalty spot. Zlatan Ibrahimovic stepped up to take the penalty kick and buried it to give LA the 1-0 lead.

The Galaxy appeared to doubled their lead just before the half when Daniel Steres got on the end of a deflected ball in the box, but video review showed him to be in an offside position, which kept the score 1-0 heading into the half.

Sporting KC finally found their equalizer in the 84th minute at the foot of Johnny Russell. SKC had been pounding on LA’s door the entire second half and finally broke through after a brilliant solo effort from Russel that saw him get past Alessandrini, Jona Dos Santos and Ashley Cole before putting the ball into the back of the net.

Man of the Match: David Bingham came up huge for the Galaxy all night. Sporting easily could have had 3-4 goals on their whopping 34 shots, but Bingham’s great game earned LA the road result.

Moment of the Match: The controversial penalty call in the 23rd minute was the difference in the game. LA was playing defense in their own end nearly the entire match, but the PK converted by Zlatan was all they needed to earn the road draw.

Match to forget: Sporting KC’s front line couldn’t buy a goal for most of the game outside of Johnny Russell’s brilliant solo effort. Diego Rubio and Daniel Salloi each had chances that they couldn’t bury for whatever reason, but they’ll need to forget this game quickly and refocus if Sporting have any hope of salvaging a first round playoff bye.

This match went just about as expected with LAFC controlling things from start to finish on their way to a 3-0 victory.

Adama Diomande’s two goals on either side of halftime were the killing blows as the Rapids never stood a chance once down by three.

Walker Zimmerman also scored in the 15th minute to open the scoring.

Man of the Match: Adama Diomande grabbed two goals and was the prime attacking force for LAFC until he was subbed off in the 74th minute.

Moment of the Match: Diomande’s second goal put this one out of reach, even though the Rapids never once looked like they had a goal in them.

Match to Forget: Everyone on the Rapids wants to forget this one, but especially Johan Blomberg. He was useless in midfield before he was subbed off in the 52nd.

The Portland Timbers got a big away win to provide some stability to their playoff chances in the Western Conference.

In a game hurting for quality chances, Jeremy Ebobisse finally got one in the 33rd minute. He was provided with a tap-in goal thanks to a great feed from Sebastian Blanco to open the scoring.

RSL came out firing in the second half. They controlled possession and were finally rewarded for it in the 55th minute. Jefferson Savarino lost his marker in the penalty area and smashed a shot past Steve Clark for the equalizer.

Although RSL kept the pressure up, Sebastian Blanco returned the Timbers to the lead in the 70th minute. The Argentinian pounced on a loose ball between a trio of Salt Lake defenders in the penalty area and proceeded to smash it into the back of the net past a helpless Nick Rimando.

Blanco’s second came all of three minutes later. He collected a feed from Diego Valeri as he made a run from the left wing into the penalty area and popped a shot into the far upper 90 to give Portland a 3-1 lead. Lucas Melano added a fourth in the 88th minute thanks to an errant throw-in by former Timber Nick Besler.

Man of the Match: Sebastian Blanco was involved on three of the four goals and was generally the best player on the pitch.

Moment of the Match: Blanco scored the winner and the insurance goal within a few minutes of each other.

Match to Forget: Brooks Lennon was tasked at keeping Blanco at bay and, needless to say, he didn’t do a great job of that.

A pair of first-half goals from Alex Muyl and Bradley Wright-Phillips gave the New York Red Bulls complete control on their way to a comfortable victory at Avaya Stadium.

Aaron Long made it 3-0 in the 50th minute to put the match out of reach.