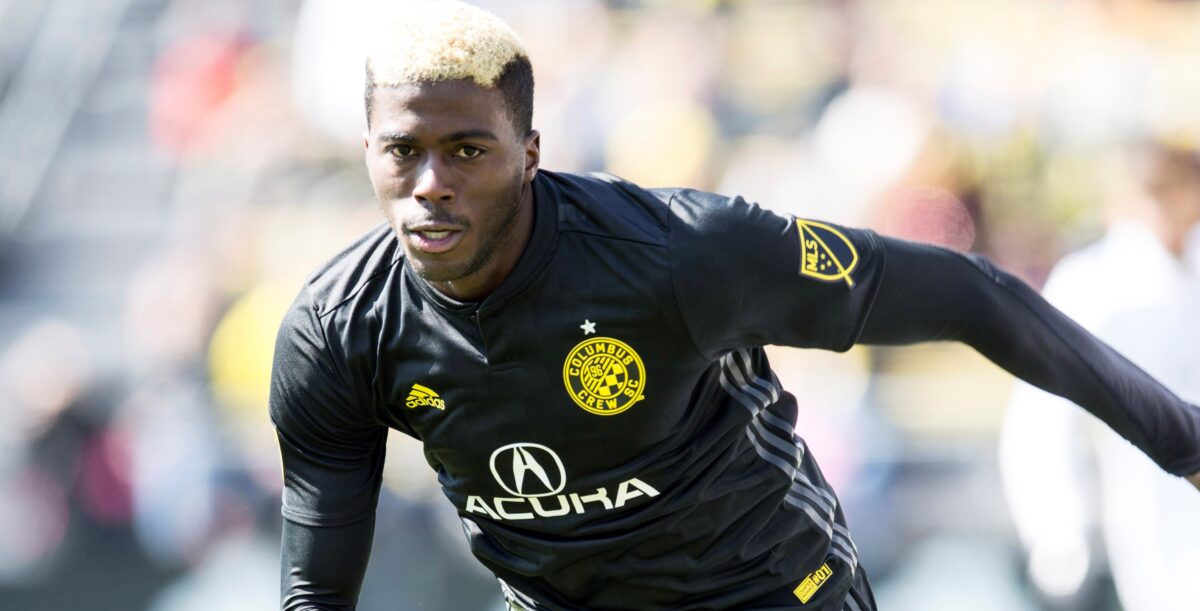 The Western Conference playoff race takes center stage in Major League Soccer in Week 32, as four of the top seven teams face off against each other.

Over in the Eastern Conference, a clash between Columbus and Montreal could alter the bottom third of the playoff spots with an Impact victory.

The rest of the schedule doesn’t pack the same punch as Week 31, but the stakes are even higher for certain teams fighting to improve their postseason position, or stay live in the playoff race.

Here are SBI’s predictions for this weekend’s MLS action, as chosen by our editorial staff.

Ives Galarcep: Crew, 2-0. The Crew have a knack for turning it up late in the regular season, and that’ll start here.

Joe Tansey: 1-1 draw. Montreal needs to respond to the thumping it received in D.C., but it’ll receive a strong fight from the Crew, who aren’t guaranteed of a home playoff game yet.

Larry Henry: Crew, 2-1. Expect the Crew to go for the match early and get a needed result.

Joe Hojnacki: Impact, 2-1. Montreal are the more desperate outfit as they look to salvage their falling playoff chances at home.

Jimmy Mack: 2-2 draw. Montreal desperately need a win to keep playoff hopes alive, but the Crew walk away with a result.

Ives Galarcep: Atlanta United, 4-1. Last week’s loss to the Red Bulls will have Atlanta United extra fired up to put a beating on the inconsistent Revs.

Joe Tansey: Atlanta United, 5-1. The Five Stripes will be too much for the Revolution, who never really had a chance to compete for the No. 6 seed in the East.

Larry Henry: Atlanta United, 3-0. The Five Stripes will roll past a Revolution side desperate for anything positive.

Joe Hojnacki: Atlanta United, 2-0. They’re the best in MLS and New England’s season may as well be over.

Jimmy Mack: Atlanta United, 4-1. Atlanta bounces back after their loss to the Red Bulls and stay in the lead for the Supporters’ Shield.

Ives Galarcep: Toronto FC, 3-1. Things are looking up for a TFC side getting healthy and starting to build some momentum, as Giovinco has a big day.

Joe Tansey: Toronto FC, 3-0. A win by the Reds will help them stay alive through the international break, while Vancouver’s rough form continues as it falls further from sixth in the West.

Larry Henry: Toronto FC, 2-1. The defending MLS champs need a result to stay alive in the playoff race, and will do so in front of their home supporters.

Joe Hojnacki: Toronto FC, 1-0. The defending champs are struggling, but travelling across a continent will hurt the Whitecaps.

Jimmy Mack: Toronto FC, 3-1. Toronto may not make the playoffs, but they’ll handle business against their Canadian rivals no problem.

Ives Galarcep: Union, 2-0. Minnesota is a much more vulnerable team on the road, and as much as Darwin Quintero is a handful, the Union defense should control this one.

Joe Tansey: Union, 2-1. The Union will come away with three points at home, but Minnesota’s attack will make it a more difficult task than some expect.

Larry Henry: Union, 2-0. Jim Curtin’s side would love a full three points in front of their home fans, and will do so after a quiet performance in Columbus.

Joe Hojnacki: 1-1 Draw. I still don’t trust the Union to get it done when it matters, even against a finished Minnesota team.

Jimmy Mack: Union, 1-0. The Union cement their spot in the playoffs with a home win against a struggling Loons side.

Ives Galarcep: FC Dallas, 3-0. The Lions are playing out the string and they’ll find the going tough in Frisco.

Joe Tansey: FC Dallas, 3-0. The real question in this game is how much FC Dallas will win by.

Larry Henry: FC Dallas, 4-0. Orlando City has been a train wreck for most of the season, and FC Dallas will take advantage as they tune up for the postseason.

Jimmy Mack: FC Dallas, 3-1. Orlando City will steal a goal at some point, but the game will never be in doubt as Dallas roll at home and stay atop the West.

Ives Galarcep: Galaxy 3-2. Sporting KC is very tough at home, but the Galaxy are playing with desperation and with their stars rounding into top form.

Joe Tansey: Sporting KC, 2-1. The Galaxy need a win more than any team in Week 32, but their defense won’t be able to hold it all together against Sporting Kansas City’s intertwined attack.

Larry Henry: Galaxy, 2-1. A needed road win will come the Galaxy’s way this weekend with Zlatan Ibrahimovic coming up big again for the Western Conference club.

Joe Hojnacki:  Sporting KC 2-1. SKC are too good at home to let an inconsistent Galaxy team beat them on their own turf.

Jimmy Mack: Sporting KC, 3-2. Zlatan is the best goal-scorer Sporting has faced in weeks, but Kansas City will bounce back after a disappointing home draw last week and takes all three points.

Ives Galarcep: LAFC, 2-1. Last week’s surprise loss in Chicago should provide a wake-up call to a LAFC side that should coast in Colorado, even with altitude playing a part.

Joe Tansey: LAFC, 3-2. Colorado’s played decent soccer at Dick’s Sporting Goods Park, and it’ll give LAFC more of a test than expected, but the expansion side’s quality will rule out in the end.

Larry Henry: LAFC, 2-0. The Rapids may have played stronger at home than on the road, but LAFC’s depth will eventually give them problems.

Joe Hojnacki: LAFC, 2-0. The Rapids also just want the season to end and LAFC has a ton to play for, so they’ll have the motivation to win and win big.

Jimmy Mack: LAFC, 2-0. LAFC are in a fight for a first round playoff bye, and they’ll keep pace with SKC and FC Dallas by taking all three points on the road.

Ives Galarcep: RSL, 2-1. This is one of the tougher games to pick this week, but RSL’s excellent home form gives them the slight edge.

Joe Tansey: RSL 2-0. This is the most important game in terms of playoff positioning, and Real Salt Lake will race for places No. 4-No. 6 in the West much more interesting with a home victory.

Larry Henry: RSL 1-0. RSL has been a lively presence on the attacking end, and that will break through eventually.

Joe Hojnacki: 1-1 draw. Both teams will be gunning hard to secure a playoff spot and it will end in two sides that won’t be able to separate themselves.

Jimmy Mack: 2-2 draw. Both teams are desperate to earn a result, and Portland will go into Rio Tinto and figure out a way to steal a point on the road.

Ives Galarcep: Red Bulls, 3-1. The Red Bulls have been prone to playing down to the level of some weaker opponents on the road this year, but last week’s win should provide the impetus to make a real push for the Supporters’ Shield.

Joe Tansey:  1-1 Draw. As someone who picked San Jose second in the West in preseason, I feel it’s only appropriate to be the only person with faith in the Earthquakes right now. This will serve as a trap game for the New York Red Bulls.

Larry Henry: Red Bulls, 2-0. The Red Bulls may have some trouble early, but eventually see BWP and Co. ease to a road win against one of the league’s worst.

Jimmy Mack: Red Bulls, 2-1. The Red Bulls have a real chance at winning the Supporters’ Shield, and they’ll need all three points if they want to overtake Atlanta.

Ives Galarcep: DCU, 2-1. This one is expected to be an easy one for D.C., but the Fire could build on the momentum of last week’s win, but it won’t be enough to stop Wayne Rooney and Co.

Joe Tansey: D.C. 3-0. There’s a fire pun to be made here about D.C.’s attack, but that would require more effort than Chicago’s defense will put out on Sunday.

Larry Henry: D.C. 3-1. The Fire’s defense will be torched on Sunday afternoon, as D.C. grabs another three points in their fight for postseason play.

Jimmy Mack: D.C. 2-0. D.C. United keep up their strong form as they look to jump into playoff position behind the leadership of Wayne Rooney and the red-hot Luciano Acosta.

Ives Galarcep: Sounders, 3-1. The Dynamo are riding high after a big week, but this is where it crashes as the Sounders run wild.

Joe Tansey: Sounders, 4-0. Houston comes down from the Open Cup victory high in harsh fashion, as the Sounders cruise to their ninth home win.

Larry Henry: Sounders, 2-1. The Sounders hand the Dynamo another league defeat, despite the visitors coming in on a high from their Open Cup triumph.

Joe Hojnacki: Sounders. The Dynamo have their trophy for the year, but they won’t be able to stop the hot Sounders.

Jimmy Mack: Sounders, 3-1. The Sounders second-half surge will continue as they work their way up the Western Conference standings, jumping their rival Timbers.