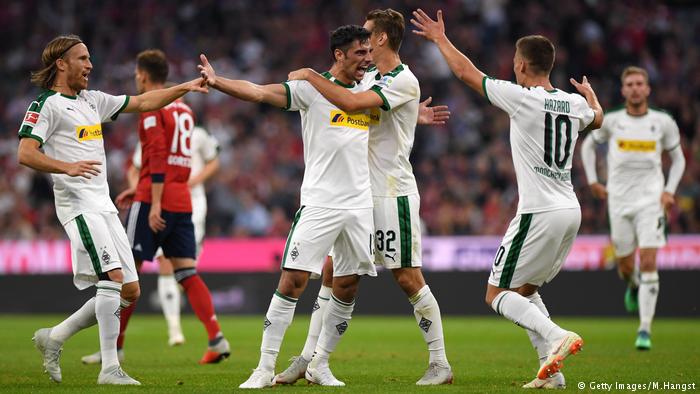 It’s taken four seasons for Borussia Monchengladbach to get the better of Bundesliga giants Bayern Munich at the Allianz Arena. The visitors celebrated into the evening on Saturday, downing Bayern 3-0 for a huge road win.

Gladbach held a 2-0 advantage at halftime through first-half finishes from Alassane Plea and Lars Stindl. The strikers goals came six minutes apart which had Bayern on the edge early. Patrick Herrmann’s 88th minute insurance goal sealed the victory for Gladbach who jumped to second in the standings. As for Bayern, they dropped to fifth after suffering their second consecutive league loss.

Elsewhere, Real Madrid suffered another winless result in league play while Levante snatched another win. Manchester United fought back from a two-goal deficit to down Newcastle United. Ligue 1 side Lille continued their strong season, while Juventus blanked Udinese away from home.

Manchester United got back to winning ways as they came back for a 3-2 win over Newcastle United. It was not the perfect start however as the Magpies jumped out to a two-goal lead after 10 minutes. Kenedy and Yoshinori Muto each scored to put the visitors ahead early. The Red Devils would answer after the hour mark starting through the form of Juan Mata.

The Spaniard’s free kick in the 70th minute started the comeback before Anthony Martial equalized in the 76th minute. Alexis Sanchez’s 90th minute header proved to be the game winner as Man United moved to eighth place.

For the fourth consecutive match in all competitions, Real Madrid was held goalless as they fell 1-0 at Alaves. The two sides had a combined ten shots on goals but it was the hosts who broke the deadlock late. Manu Garcia’s 95th minute header sealed the upset victory for Alaves who drew level on points with the defending European champs. Fernando Pacheco’s six saves was also important for Alaves, who posted a clean sheet in front of their home supporters.

Levante snatched their second consecutive league win as they downed Getafe 1-0 away from home. Enis Gardhi’s right-footed free kick in the 60th minute was all the visitors needed to claim three points. Frustration boiled over in stoppage time as Getafe’s Francisco Portillo saw a straight red for a silly foul. Levante sit in 10th while Getafe are in 13th.

Bobby Wood was among the goals for Hannover as they defeated Stuttgart 3-1 at home on Saturday. The U.S. Men’s National Team striker scored a brace in the final 15 minutes of the first-half at HDI Arena. His first came in the 30th minute as he headed Miiko Albornozs’s cross into the top-right corner. Wood doubled his tally before halftime, with another header to Albornoz’s cross to make it 2-0. Mario Gomez’s right-footed finish in the 50th minute pulled a goal back for the visitors but Hannover would have the final say. Ihlas Bebou’s stoppage time finish sealed the victory for the hosts, who grabbed their first win of the season.

Juventus used a pair of first-half goals to down Udinese 2-0 at Friuli on Saturday afternoon. Rodrigo Betancur’s close-range header in the 33rd minute broke the deadlock for Juve, minutes before Cristiano Ronaldo doubled the lead with his fourth goal of the season. Wojciech Szczesny made a trio of saves as the Old Lady extended their lead to nine points over second-place Napoli.

AS Roma made it ten goals scored this week in all competitions, easing past Empoli 2-0 away from home. Steven Nzonzi’s header in the 36th minute broke the deadlock for this first goal for the club. Empoli had a golden opportunity to draw level in the 58th minute, but Francesco Caputo’s penalty kick soared over the goal. Edin Dzeko insured the victory in the 85th minute, finishing Stephan El Shaarawy’s assist past Pietro Terracciano. Roma sits in third place after the win, while Empoli are in the bottom-three.

Second-place Lille continued their impressive run to their domestic season, downing St. Etienne 3-1 at the Stade Pierre-Mauroy. Jonathan Bamba’s seventh goal of the season gave the hosts a 1-0 lead which was later canceled out by Remy Cabella’s penalty kick. Bamba’s second goal of the season came in the 46th minute which flipped the match back into Lille’s favor. Nicolas Pepe’s 84th minute finished was set up by Bamba, which sealed the home victory. It was Lille’s second straight match with three goals scored, and they now sit five points back of leaders PSG.