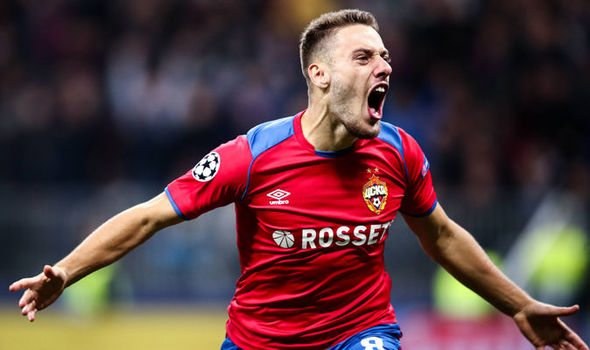 Here’s a closer look at all of Tuesday’s UCL action:

Real Madrid was hoping to get a positive result in the competition they have dominated in recent years following a frustrating week in La Liga. After a loss at Sevilla and a 0-0 draw against Atletico Madrid on Saturday, Los Blancos’ struggles followed them to Russia.

Nikola Vlasic got on the end of a Toni Kross pass that Raphael Varane struggles to deal with and put Moscow ahead in the 2nd minute.

Casemiro’s shot off the post in the 28th minute, and Karim Benzema’s headed effort off the crossbar in the 40th minute were the closest Madrid came to equalizing.

Manchester City fell to Lyon on Matchday 1 and didn’t get off to an ideal start on Tuesday vs. Hoffenheim. Keram Demirbay’s first-minute strike put his side ahead and City found themselves behind once again.

Sergio Aguero made sure it didn’t stay that way for too long equalizing in the 8th minute. David Silva played Leroy Sane through on goal who slid the ball to Aguero for the goal. City had a chance to go ahead in the 15th minute but Raheem Sterling’s breakaway attempt was stopped by Oliver Baumann.

David Silva found a winner for City in the 87th minute when he dispossessed Stefan Posch inside the penalty area and slid the ball past Baumann. This gave the English side their first points of the campaign.

On the other side of Group F, Lyon played host to Shakhtar Donetsk. Junior Moraes gave the Ukranian champions the league in the 44th minute getting on the end of an Ismaily cross. Moares picked out the far corner in the 55th minute to double his goal tally and double his sides lead.

Moussa Dembele nodded home his first UCL goal for Lyon in the 71st minute getting on the end of a cross sent in from Nabil Fekir. Leo Dubois followed that up with a goal of his own in the 72nd minute after Shakhtar failed to clear the ball out of their penalty area.

The match ended in a draw which saw Lyon move top of their Champions League Group. Shakhtar earned their second consecutive draw in the competition and sit in third place with two points.