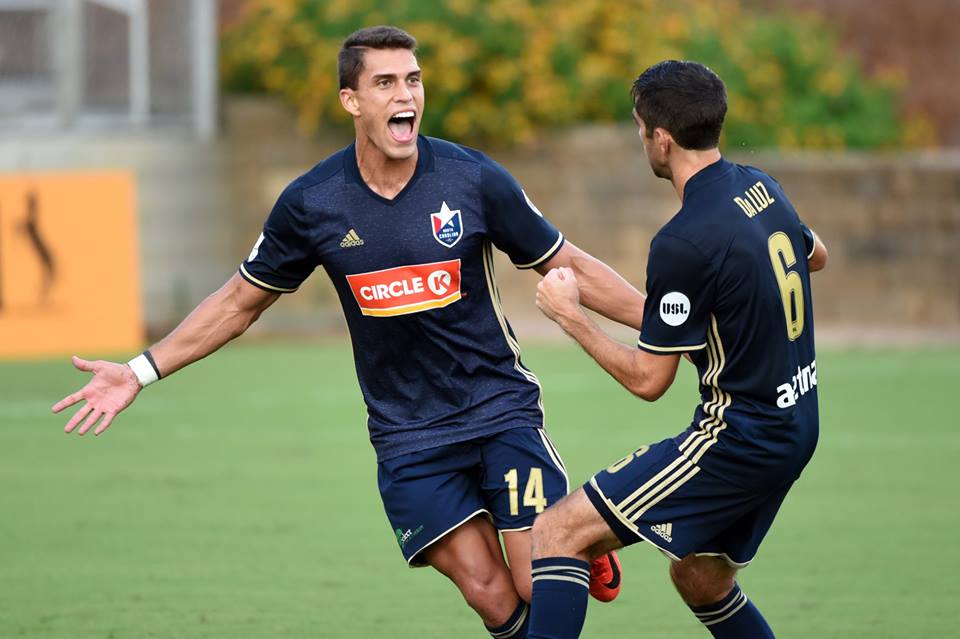 Four of the teams in action are fighting for postseason spots, while another three are jockeying for the best possible playoff position.

Below is a look at all seven games taking place over the next two days in the USL.

A brace from North Carolina FC striker Daniel Rios helped split the points between Tuesday’s opponents when they met on June 23rd at Sahlen’s Stadium at WakeMed Soccer Park in Cary, North Carolina.

Paco Craig and Ilija Ilic scored the late-June goals for Louisville City, who have clinched their place in the 2018 USL Cup Playoffs and currently sit in second place in the East.

Both clubs will have a short turnaround after Tuesday, with Louisville City hosting the Indy Eleven in their final regular season match of 2018 on Saturday, while North Carolina FC make their way to suburban Charlotte to face the Independence.

Already-eliminated Penn FC welcome the New York Red Bulls II on Tuesday at FNB Field in Harrisburg, with the NYRB II currently holding the final playoff position out east by a lone point over the Ottawa Fury FC.

A win for NYRB II could see John Wolyniec’s team vault over Bethlehem Steel FC and Nashville SC and into sixth place.

Nashville will finish their regular season on Saturday with a visit from table-topping FC Cincinnati in the team’s third matchup of ’18.

Saint Louis FC will be desperate for points in their penultimate match of 2018, but the Tulsa Roughnecks enter Toyota Stadium looking to keep Saint Louis out of the playoffs.

Saint Louis are in 9th place in the West, tied on points with San Antonio FC, but behind their Texas rivals by way of the total league wins tiebreaker. Saint Louis have a game in hand over San Antonio FC and will finish their regular season on Saturday against OKC Energy FC.

Leading-scorer Kyle Greig will be a focal-point for Saint Louis FC against the Roughnecks, with the former Benedictine Raven having scored against Tulsa in Saint Louis’ 3-0 win on June 9th. Greig, will lead Saint Louis’ forward line alongside Corey Hertzog, who was removed in the second half of Saint Louis’ 2-0 loss to Phoenix Rising FC on September 29th, but will be fit on Wednesday.

Seattle Sounders FC 2 welcome the Colorado Springs Switchbacks FC to Cheney Stadium in Tacoma late on Wednesday evening. Both teams were reduced to ten men in their only meeting of 2018, a 0-0 draw on April 21st at Weidner Field in Colorado Springs.

Rising FC look to claim first place in the Western Conference. Las Vegas were hammered by Wednesday’s guests on June 13th in Scottsdale, Arizona with a terrific brace from Jason Johnson in a 4-0 Rising win.

Phoenix captain, and Western Conference MVP candidate Solomon Asante added a goal for the Rising, as did Joe Farrell.

Phoenix ran away 2-0 winners on August 18th in their previous trip to Las Vegas’ Cashman Field, behind another goal from Solomon Asante and a late penalty-kick from Kevaughn Frater.