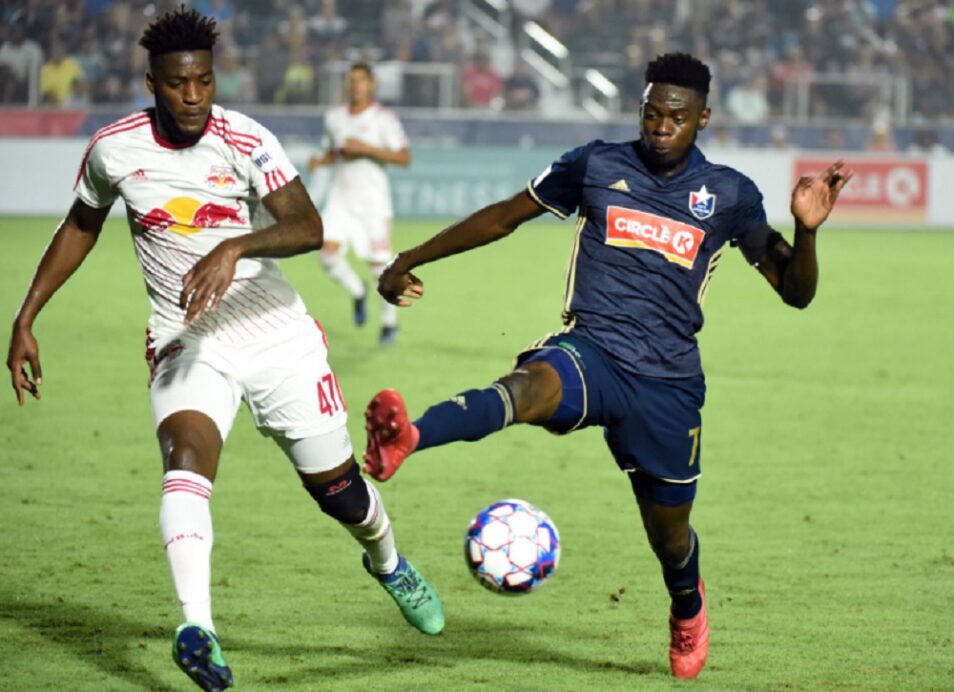 The New York Red Bulls II were the big winners in the USL’s Eastern Conference this weekend, with John Wolyniec’s team securing a vital 2-1 road win over North Carolina FC. NYRB II went down to ten men when first half stoppage time after goal-scorer Anatole Abang was given his marching orders in the last act of the opening 45 minutes.

The win for the Red Bulls II pulled them above the Ottawa Fury FC and into the eighth and final playoff place. NYRB II have a game in hand over the Fury which will be played on Tuesday against Penn FC at FNB Field in Harrisburg, Pennsylvania.

Elsewhere in the Eastern Conference, Nashville SC, who have not lost since September 18, impressively brushed aside the Richmond Kickers 3-0 at City Stadium in Virginia’s capital city. Nashville are tied on points with the Bethlehem Steel who played Indy Eleven to a 1-1 draw earlier in the evening at Lucas Oil Stadium. The result kept Indy in fifth place in the East.

Saturday also saw the Pittsburgh Riverhounds play out a dour 0-0 draw with Cincinnati FC at Highmark Stadium in a matchup of two clubs who have already clinched their place in the 2018 USL Cup Playoffs. The Charlotte Independence broke their streak of four consecutive draws as they defeated the Tampa Bay Rowdies 2-1 behind two first-half goals at Al Lang Stadium.

In the Western Conference, San Antonio FC made it two wins in a row behind a brace from Éver Guzmán that saw off the Las Vegas Lights FC at Toyota Field in San Antonio. Lance Laing added an 80th-minute goal for home side over an hour after Sammy Ochoa had given the Lights an early lead. San Antonio’s win pushed Darren Powell’s team into eighth place in the Western Conference by virtue of having an extra win over Saint Louis FC.

Saint Louis were idle this weekend and have a game in hand over San Antonio. They next host the Tulsa Roughnecks on Wednesday at Toyota Stadium in Fenton, Missouri before finishing their season on October 13 against the the Oklahoma City Energy.

Orange County SC maintained their lead at the top of the Western Conference with their fifth-straight win on Saturday, defeating the Seattle Sounders FC 2 by 2-1 through a stoppage-time penalty from Aodhan Quinn. OCSC captain Richard Chaplow scored his side’s first goal at Champions Soccer Stadium just two minutes after Azriel Gonzalez had given S2 the lead on the hour mark.

The Sacramento Republic have now won six of their last seven games after defeating LA Galaxy II by 2-1 score in Carson, California. The win cements their third-place standing in the West.

Phoenix Rising FC and Reno 1868 fought out a goalless contest at the Phoenix Rising Soccer Complex that the Rising FC bossed from start to finish without being able to find a winner. Both sides have already clinched their playoff spot.

Rio Grande Valley FC took down the Tulsa Roughnecks 2-1 with all three goals coming during a wild nine minutes. Both sides have long been eliminated from playoff contention.

Looking back to Friday evening, saw a pair of three-goal outbursts, with Toronto FC II falling 3-1 in Canada to Louisville City FC, while out west Fresno FC defeated the Colorado Springs Switchbacks FC 3-0 at Chukchansi Park. The USL weekend will finish on Sunday afternoon with Atlanta United 2 hosting the Charleston Battery at Coolray Field.