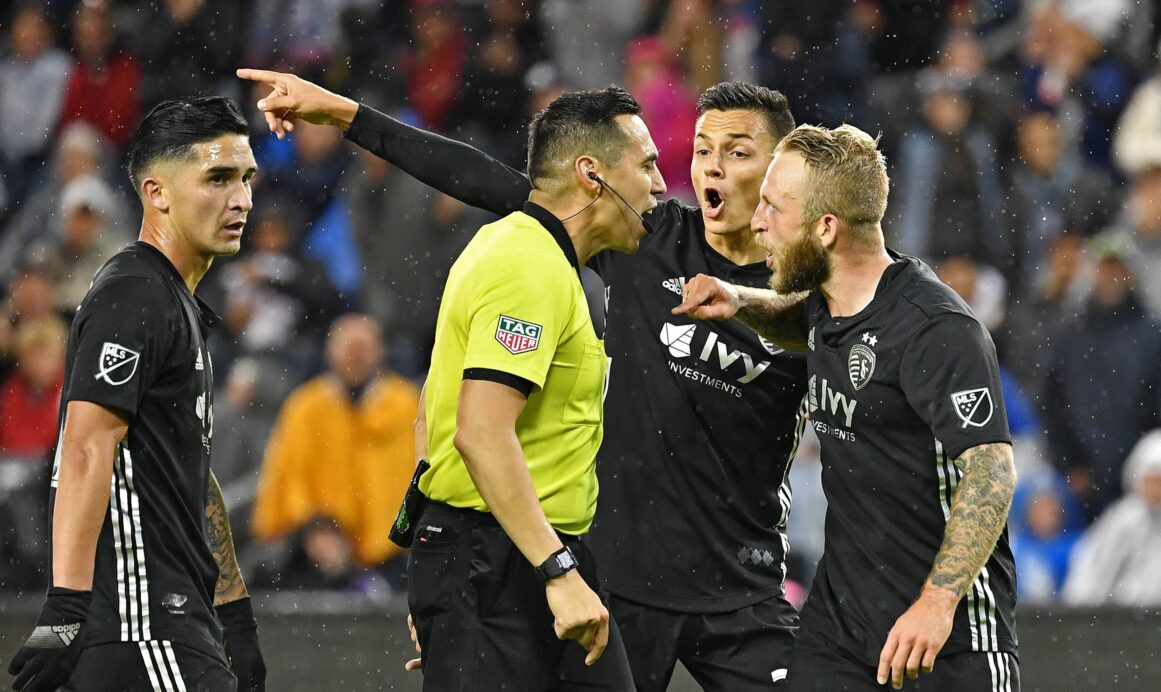 Peter Vermes might be hearing from the MLS league office this week about some of his postgame comments.

The Sporting Kansas City coach was fired up about some of the decisions by head referee Jair Marrufo and his crew after Sporting KC’s 1-1 draw against the LA Galaxy Saturday night in Kansas City.

“Unfortunately, we were playing against not only the team but also the referees on the field.”

The Galaxy’s lone goal came on a controversial 23rd-minute penalty decision. Ola Kamara went down in the box, and Marrufo indicated after the match that he blew for the penalty on Besler for “tripping.” He declined to review the play further after talking with the video assistant referee.

“Terrible decision – 100 percent terrible decision,” Vermes said. “I’ll say it this way. When you have a live game, at the speed at which the game is being played, there is absolutely chances for making mistakes. But when you have a replay to look at, that tells you the incompetence of the people that are actually viewing it.”

Even though Sporting KC pulled one back late thanks to a brilliant solo effort from Johnny Russell, Vermes still thinks his team was robbed of the full three points.

The Sporting KC coach had high praise for his team’s performance after the game. SKC outshot the Galaxy 34-8, dominated possession 59% to 41%, and won in passing accuracy 86% to 77%. Yet SKC had five yellow cards to LA’s one, and Marrufo appeared to lose control of a match nearly turned into a brawl at times.

Just before the final whistle, Sporting were pressing hard for the go-ahead goal in stoppage time when Galaxy keeper David Bingham came out of the net to punch away a cross in the box. His fist caught SKC striker Diego Rubio in the head, which prompted more angry comments from Vermes.

“That’s 100 percent a penalty kick. No player on the field, I don’t care if it’s a goalkeeper or anybody, has the ability to punch somebody in the head in a game. It doesn’t matter. That is reckless.”

Rubio was mostly tight-lipped after the game, but he said that conversations with referees before the season indicated that the play should have been called a penalty.

“This is a play we actually talked about with the referees at the start of the season,” the striker said. “If the keeper hit the player even if he touch a little bit of the ball it’s a penalty. I think it’s a penalty. 100%. 200% a penalty.”

“We can’t say too much because we’ll get fined. But sometimes the media needs to criticize the ref because the decision can impact the future of a team and the playoffs.”

The point from the draw was just enough to keep Sporting KC in second place in the West. LAFC’s victory over Colorado pulled the expansion side level with Sporting KC on points, but it currently holds the goal-differential tie breaker.

The result also clinched a playoff berth for the eighth straight year, but now SKC’s attention turns to holding onto one of the top two spots in the West and earning a first round bye.

Sporting KC next travels to Vancouver before finishing the season against first place FC Dallas and third place LAFC.

“We want to finish as high as we can,” said SKC forward Johnny Russell. “We all know how much the home advantage can work as well. There’s so much to play for still. We’ve got a few important games left that we need to take points.”