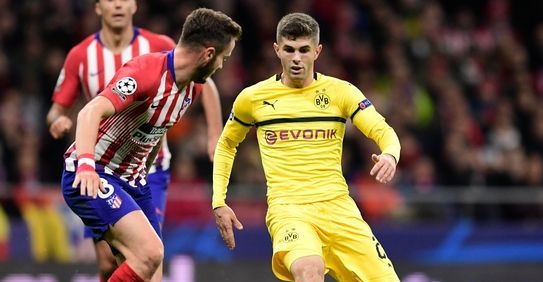 Christian Pulisic and Ethan Horvath were two of the bright spots in the latest friendlies for the U.S. Men’s National Team. Wednesday will see the pair square off for the first time domestically as Borussia Dortmund faces Club Brugge in UEFA Champions League play.

Dortmund leads Group A as Pulisic aims for a spot in Lucien Favre’s starting XI. The 20-year-old came off the bench on Matchday 1 to score the game winning goal against the Belgian outfit. Horvath meanwhile, has started the last five games in all competitions for Brugge, including a 4-0 shutout over Monaco on Matchday 4. Anything less than a victory for Club Brugge will see them eliminated from advancing to the knockout stage.

Elsewhere, Weston McKennie will hope to get back in Schalke’s starting XI after missing out on the weekend. Romain Gall and Malmo face a winnable test against Genk, while Lynden Gooch will look to follow up a strong performance last weekend in league play. Eric Lichaj and Geoff Cameron headline EFL Championship play midweek.

Here’s a closer look at this weeks Americans Abroad: