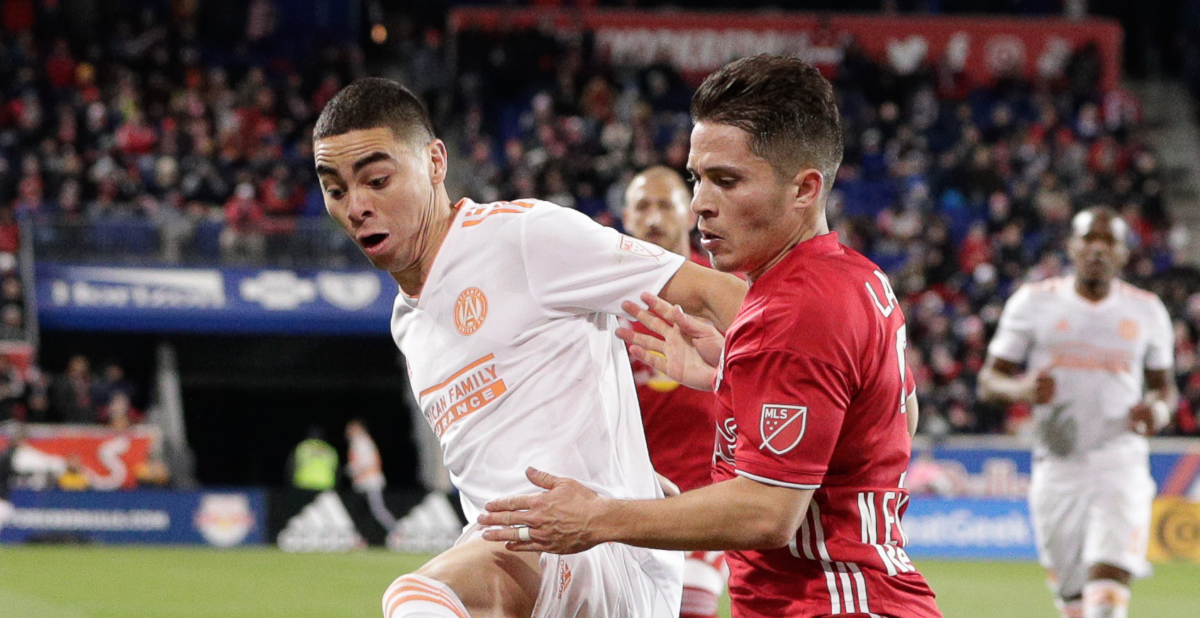 HARRISON, N.J. — Atlanta United took care of business at home with its attack, but the club’s defense led the way on the road.

Atlanta United advanced to the MLS Cup Final on Thursday night, falling 1-0 at Red Bull Arena but defeating the New York Red Bulls, 3-1, on aggregate. The result in the second leg of the Eastern Conference Finals knocked the Red Bulls out of the playoffs and gave Atlanta United hosting rights for the championship match on Dec. 8.

The second-year club will play the victor of Thursday’s other semifinals bout between Sporting Kansas City and the Portland Timbers.

Atlanta United, which had been edged by the Red Bulls for the Supporters’ Shield on the final day of the regular season, closed out the series with an organized and compact defensive performance. New York found a tap-in goal through Tim Parker in second-half stoppage time, but was unable to muster up enough quality against a tough Atlanta defense.

The Red Bulls thought they had started a late rally moments earlier when they found the back of the net in the 80th minute, but the use of VAR disallowed Aaron Long’s headed effort for nodding the ball out of Atlanta United goalkeeper Brad Guzan’s hands.

New York had a decent look go begging before halftime. After Guzan raced well off his line to try and punch the ball clear, Tyler Adams attempted a volley from just outside the penalty area. The chance on the empty net was smashed high and wide, however.

It was actually Atlanta that had the best chances on the night, with a clear cut one coming a mere 12 seconds in. A kickoff that turned into a long ball saw Josef Martinez collect the ball in space before racing towards goal, but his ensuing shot was too weak to trouble Red Bulls goalkeeper Luis Robles.

Atlanta United’s other near chance occurred in the 21s minute when Julian Gressel unleashed a low shot from outside the penalty area that was headed towards the bottom left corner. Robles came to the rescue, however, with a superb dive to push the ball away.

While Atlanta United’s entire defense played well throughout, captain Michael Parkhurst led the way with some stellar play at the back. He held Bradley Wright-Phillips in check, forcing the Red Bulls’ star striker to drop out of the penalty area and into deeper positions to try and get a touch of the ball.

In need of a goal, the Red Bulls’ best chance in the opening stanza came via Adams’ volleyed attempt. It was not easy by any means, but New York sorely needed a goal there just before halftime to have any shot of turning the series around.

For the second straight game, Red Bulls wide midfielders Daniel Royer and Alex Muyl provided little from the run of play. They failed to combine with Alejandro ‘Kaku’ Romero Gamarra and also did not provide much service to a starved Wright-Phillips, leaving the Red Bulls with few chances to find the necessary goals.