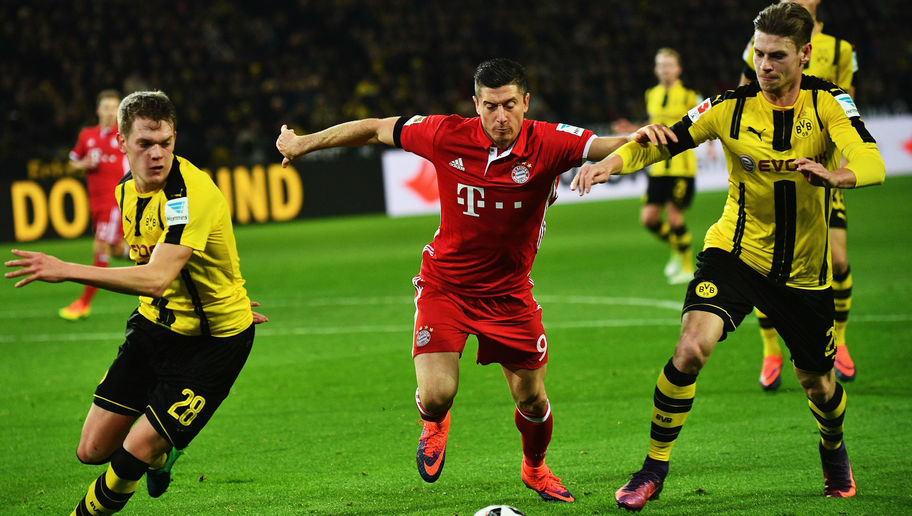 Ten matches into the German Bundesliga season, it is Bayern Munich doing the chasing with Borussia Dortmund at the top of league summit. Saturday will see another chapter of Der Klassiker take place at Signal Iduna Park.

Dortmund is coming off their first defeat of the season in all competitions, falling 2-0 at Atletico Madrid away from home. If Lucien Favre’s team want to continue their league dominance then they will need to be more aggressive on the attacking front. Marco Reus and Jadon Sancho headline the attack, with 10 combined goals and nine assists.

Bayern sits four points back of their league rivals, but are coming off a 2-0 Champions League win over AEK Athens. Robert Lewandowski was amongst the goals against for Niko Kovac’s side, scoring a brace in the home shutout. The former Dortmund star has 10 goals in 14 appearances in the current campaign.

Elsewhere, Manchester City and Manchester United duke it out in the Premier League headliner this weekend. AC Milan welcomes Juventus to town in Serie A play while Napoli travels to Genoa. PSG will seek a rout against slumping Monaco in France. Barcelona faces a winnable home match on Sunday after drawing midweek in the Champions League.

The first Manchester Derby is upon us with both teams coming off Champions League victories midweek. League leaders Manchester City rolled past Shakhtar Donetsk 6-0 at home, with Gabriel Jesus bagging his first hat trick for the club. City has won its last six matches in all competitions, outscoring their opponents 23-1. Sergio Aguero and Raheem Sterling will both be important and are coming into the match on good form.

Manchester United came back to defeat Juventus 2-1 at the Allianz Stadium, scoring both goals in the final 10 minutes of the match. The Red Devils are nine points back of the Citizens in the league table, currently sitting in seventh. If they want to get back into the thick of things before the international break, then Jose Mourinho’s side need a strong performance at the Etihad. Anthony Martial leads the team with five goals.

La Liga leaders Barcelona will aim to bounce back from a midweek draw at Inter Milan as they welcome Real Betis to town. Ernesto Valverde’s side could welcome back Lionel Messi from injury, after the Argentine missed out on Wednesday. However, Luis Suarez has stepped up big time, leading the Catalan side with nine goals in 11 appearances.

Real Betis sit in 14th place and are coming off back-to-back draws in all comps. Scoring in the league has been a problem for Betis, who only have eight goals through 11 matches. Spanish forward Loren Moron leads the team with three tallies, and will need to be strong against a stubborn Barca backline.

Fourth placed RB Leipzig saw their ten-match unbeaten run snapped on Thursday, with a 2-1 Europa League defeat to Celtic. They will try to bounce back on Sunday as they welcome Bayer Leverkusen to town in league play. German international Timo Werner leads the team with six goals, and will look to help Leipzig grab their first league win over Leverkusen since April 2016.

Leverkusen currently sits in 13th place but defeated FC Zurich 1-0 in Europa League play on Thursday. Midfielder Julian Brandt assisted on the lone goal in the win, and has been influential for the team in all competitions. The 22-year-old German has three goals and five assists and will be key if Leverkusen wants to turn things around in the Bundesliga.

League leaders Juventus will seek to remain perfect in Serie A as they travel to the San Siro to face AC Milan on Sunday. Max Allegri’s side fell to Manchester United midweek but have yet to lose domestically in 2018-19. Cristiano Ronaldo has scored in four of his last six appearances for the Old Lady and has scored three times in six all-time appearances against AC Milan.

AC Milan are comfortably in fourth place and like their opponents are coming off midweek play. A 1-1 draw against Real Betis extended their unbeaten run to four matches but now know they have a biggest test this weekend. Spanish winger Suso has four goals and eight assists while Gonzalo Higuaín cannot play against his parent club due to loan.

Napoli will hit the road for the first time in their last three matches, traveling to Genoa on Saturday. Carlo Ancelotti’s team is coming off a 1-1 midweek draw with PSG, where Lorenzo Insigne’s penalty kick helped the hosts to a point. The forward is tied with fellow teammate Dries Mertens with seven goals in league play, and has scored in five of his last six appearances for the club.

Genoa are seeking to end their five-match winless run, which currently has them sitting in 14th place. Offensively they are led by Polish forward Krzysztof Piatek who has nine goals in 11 matches. Defensively though they have inconsistent, allowing 13 goals over their current losing run.

Paris Saint-Germain will aim to trounce Monaco this weekend as they try to stay perfect in Ligue 1. Thomas Tuchel’s side sit 11 points clear in the league table, yet to lose a league match under the former Borussia Dortmund manager. Kylian Mbappe has registered a point in each of his last three appearances, while Neymar scored against Monaco last season.

Monaco are on dreadful run of form, failing to win since the opening day of the league season back in August. Thierry Henry’s side are in 19th place and four points from safety after losing four of their last five league matches. Offensively, Radamel Falcao has four goals but they are not getting help from the rest of their talented attacking front. If Monaco isn’t careful, they could get a pasting on their own home turf.