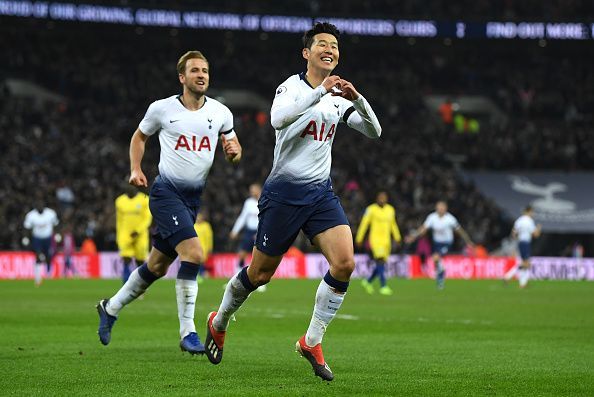 A trio of Spurs biggest stars all scored goals as they rolled past Chelsea 3-1 at Wembley Stadium on Saturday evening. Dele Alli’s eighth-minute opener kicked off things in London before Harry Kane bagged his seventh league goal of the season before the 20-minute mark. An amazing run by Son Heung-Min in the 54th saw the South Korean add to the onslaught with a nice finish to make it 3-0. Olivier Giroud’s header in the 85th minute pulled a goal back for Chelsea who finished as second-best on the night. Spurs jumped into third while bumping their rivals down a spot into fourth.

Elsewhere, Real Madrid was blanked on the road at Eibar while Barcelona snatched a point at Atletico Madrid. Fulham got off to a winning start under new manager Claudio Ranieri. Juventus kept another clean sheet in Serie A play, while Bundesliga leaders Borussia Dortmund won on the road. PSG and Lyon each grabbed slim victories in Ligue 1 play.

Claudio Ranieri’s return to the Premier League kicked off with a bang as Fulham defeated Southampton 3-2 at Craven Cottage. Goals from Aleksandar Mitrovic and Andre Schurrle in a ten-minute span swung the match back in Fulham’s favor after Stuart Armstrong opened things in the 18th minute. The former Celtic man rifled in his second of the match in the 53rd minute to tie the match at 2-2. However, a guided right-footed shot by Mitrovic in the 63rd minute was all Fulham needed to earn their first league win since Aug. 26th.

Real Madrid’s league troubles continued on Saturday with a 3-0 hammering to Eibar away from home. Gonzalo Escalante’s left-footed finish in the 16th minute kicked things off for the hosts, who made the most of a fast break. Sergi Enrich added to the lead for Eibar in the 52nd minute, before Kike Garcia added a third in the 63rd minute from close-range. Los Blancos was held to three shots in total, suffering their fifth league defeat of the season.

Barcelona had to dig deep to earn a point on the road at Atletico Madrid. Ousmane Dembele’s 90th-minute finish capped off the 1-1 result at the Wanda Metropolitano on Saturday. Diego Costa’s headed from a corner kick after 77 minutes gave Diego Simeone’s side a deserved lead. However, the visitors used a sixth goal in all competitions for Dembele to snatch a point in Madrid. Barcelona dropped to second with Sevilla’s win while Atletico are a point back in third.

Bundesliga leaders Borussia Dortmund used a quick pair of second-half goals to down Mainz 2-1 at Opel Arena on Saturday. After officially signing with the club from Barcelona, Paco Alcacer’s right-footed finish in the 66th minute gave Lucien Favre’s side a 1-0 advantage. However, it didn’t take long for Mainz to answer as Robin Quaison equalized four minutes later for his first league goal of the season. Just a moment after seeing his shot blocked, Lukasz Piszczek roofed a right-footed winning goal for Dortmund to move them four points clear at the top of the table.

Serie A leaders Juventus made it back-to-back clean sheet wins after a 2-0 success over Spal on Saturday. Cristiano Ronaldo was amongst the action again, scoring off a set piece in the 28th minute. It was the Portuguese international’s 10th goal for the club in all comps. After a while of waiting, Juventus shut the door on the league minnows as Mario Mandzukic scored in the 60th minute for a 2-0 final. The Old Lady sits eight points clear of Napoli at the top of the league summit, while Spal are in 15th.

PSG made it four wins out of their last five matches, shutting out Toulouse 1-0 at the Parc Des Princes on Saturday. Edinson Cavani followed up a hat trick against Monaco two weekends ago, by scoring the eventual winner in the ninth minute. After a headed pass from Adrien Rabiot, Cavani slotted in his ninth league goal of the season. Toulouse had more shots on goal in the end, but eventually slumped to their fourth defeat in their last five matches.

Lyon extended their unbeaten run to seven matches in all competitions, downing St. Etienne 1-0 on Friday. After a scoreless first-half, Lyon defender Jason Denayer headed in Memphis Depay’s cross to give Lyon a lead they would not relinquish. Despite a 70th-minute red card to Rafael, the hosts held on to jump into second place on 27 points. St. Etienne dropped to sixth after seeing their winless run against Lyon extend to three matches.