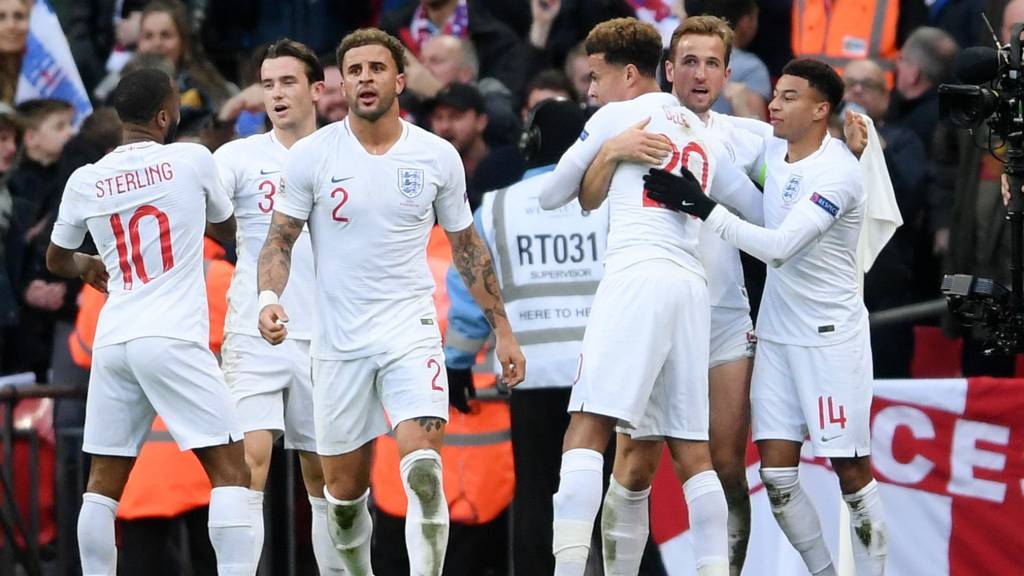 The UEFA Nations League has been in full swing this international break, seeking many top matchups take centerstage.

Headlining this weekend’s action was England’s come-from-behind win over Croatia which saw the Three Lions boosted into the tournament finals. Harry Kane and Jesse Lingard was among the goals for Gareth Southgate’s side, after their demolition of the USMNT last week.

Germany saw themselves relegated from Group A1 after the Netherlands defeated World Cup winners France on home soil. Joachim Low’s men now face the Dutch this week, seeking a positive end to what has been a disappointing campaign.

Elsewhere, Switzerland rolled past Belgium at home to join England in the tournament finals. Sweden downed Turkey away from home while Italy had to settle for a scoreless draw with Portugal. Scotland rolled past Albania to set up a winner take all match against Israel in Group C1.

Here’s a closer look at this weekend’s Nations League action:

England exacted revenge on Croatia after a semifinal defeat in last summer’s World Cup by relegating their opponents at Wembley on Sunday by a 2-1 scoreline.

Following a scoreless first-half, Andrej Kramaric broke the deadlock in the 57th minute as he rifled a right-footed shot into the top-left corner. It was the Hoffenheim man’s second goal of the competition.

After scoring a beauty against the U.S. last week, Jesse Lingard equalized for England in the 78th minute. The Manchester United scored from a rebound after Harry Kane was repelled by Lovre Kalinic a minute prior.

Kane played the hero in the 85th minute, scoring from a set piece as he slid a right-footed shot past Kalinic. It was Kane’s first goal in the competition for England.

The victory now sees the Three Lions advance to the tournament finals.

The Netherlands avoided relegation from Group A1 after a 2-0 triumph against France on Friday.

Georginio Wijnaldum’s left-footed finish after 44 minutes gave the Dutch a halftime lead. Ryan Babel was kept out by Hugo Lloris but the Liverpool midfielder pounced on the rebound to give himself two goals in his last two international appearances.

After dominating most of the second-half, Ronald Koeman’s side got an insurance goal to ice the win. Memphis Depay’s 96th minute penalty kick goal sealed the impressive win for the Netherlands who cannot finish higher than second in the group.

The Germans were relegated with the Netherlands victory.

Switzerland exacted revenge on Belgium with a 5-2 beatdown of Roberto Martinez’s side in Luzern.

Eden Hazard’s first-half brace had the visitors ahead by two after 17 minutes but the match flipped entirely before halftime.

Ricardo Rodriguez’s penalty kick in the 26th minute pulled a goal back for the Swiss, ahead of Haris Saferovic’s first goal of the match just minutes later.

The Benfica striker put Switzerland in front 3-2 in the 44th minute, finishing Edimilson Fernandes’ assist into the top-left corner.

Nico Elvedi’s 62nd-minute header extended the hosts advantage after the hour mark before Seferovic headed in the Swiss’ fifth of the evening.

Sunday’s defeat was Belgium’s first competitive defeat by two goals or more since July 2016 at the European Tournament.

Denmark gained promotion with a 2-1 road win over Wales on Friday afternoon.

Nicolai Jørgensen’s long-range effort in the 42nd minute snuck past Wayne Hennessey to give the Danes a 1-0 halftime lead.

After taking an earlier lead, Denmark iced the result thanks to a Martin Braithwaite finish in the 88th minute. Braithwaite received a pass from Henrik Dalsgaard and rifled a right-footed shot into the top-right corner.

Gareth Bale pulled one back after the ensuing kickoff for Ryan Giggs’ side but it wasn’t enough as Denmark captured Group B4.

Here’s all of this weekends Nations League results: