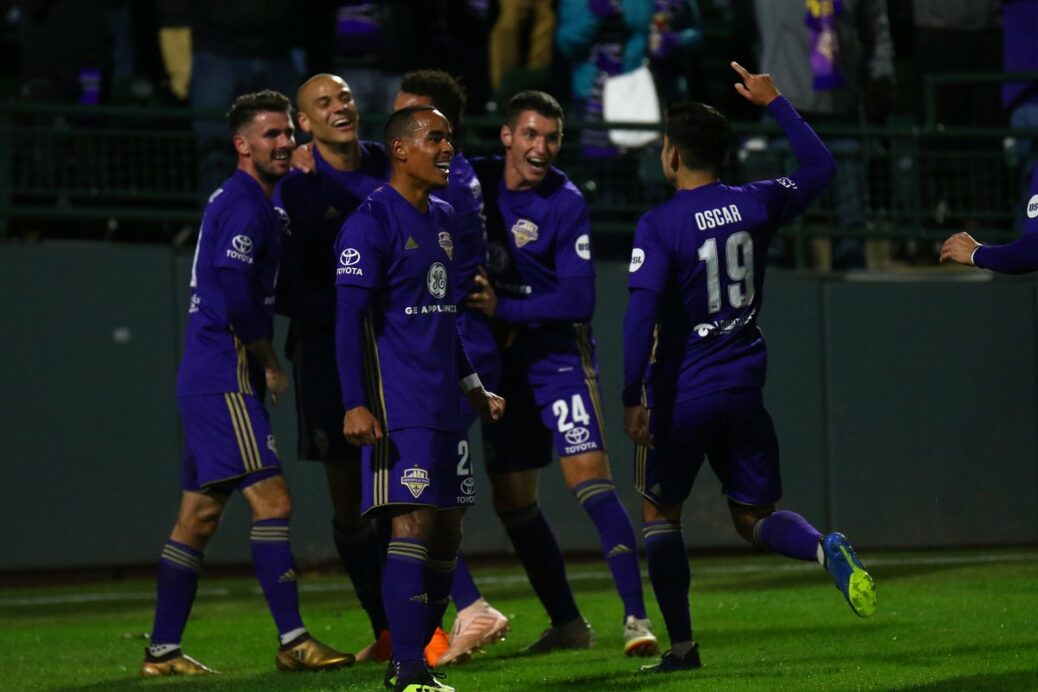 After their fourth consecutive conference final, Louisville City has a chance to defend their USL title in Lynn Stadium.

The game got off to a rocky start for the home side as star striker, Cameron Lancaster was helped off the field with an apparent hamstring injury.

In the 15th minute, a tangle of legs by George Davis IV from Louisville gave the penalty to NYRB II. Christopher Lema slipped on the attempt and sent his take way over the top of the bar. Just nine minutes later Andrew Tinari pushed over Ilija Illic in the penalty area who scored his chance from the spot for the first half lead.

In the 32nd minute, Brian Ownby sent in a perfectly weighted cross for Luke Spencer who was able to coolly slide home the second goal of the match.

How about this for a second? 🙌@luke_spenc puts us ✌️ to the good on a brilliant pass from @BrianOwnby90!

It would take to the second half for NYRBII to get a goal back and it would come from Tom Barlow with a well hit glancing header that snuck in past Greg Ranjitsingh. Five minutes later Louisville brought on Devon “Speedy” Williams for Davis IV to make a super sub impact and what an impact it was.

In the 73rd minute, Williams found Louisville’s third goal after running onto the through ball from Niall McCabe. But he wasn’t finished there as two minutes later Speedy blasted a shot from the top of the box for the three-goal cushion. To add onto the dominant second half, Brian Ownby scored the fifth goal in the 81st minute recovering from his first shot that wasn’t cleared by the New York backline.

A closer contest in Irvine, California as Phoenix made their first ever USL Cup Final.

The game was kicked off with a record-breaking start as just two minutes into the game Chris Cortez found the back of the net for the fastest goal in USL playoff history.

Friendly reminder that this is a "road" match.@c_cortez88 sends the crowd into hysterics to start the show. #UpRising pic.twitter.com/qaeC2QELZA

Injured star strikers is a trend for these conference finals as Chris Cortez was taken off and replaced in the 62nd minute.

Ten minutes later Didier Drogba would send home the match winner for Phoenix Rising. His first shot on goal was blocked but fell right back to his feet and was able to send home the second attempt to double Phoenix’s lead.

Koji Hashimoto gave Orange County hope in the 82nd minute running onto a floated ball and finishing it low. OC had a late chance to equalize but the powerful shot was caught by Carl Woszczynski to see out the game.