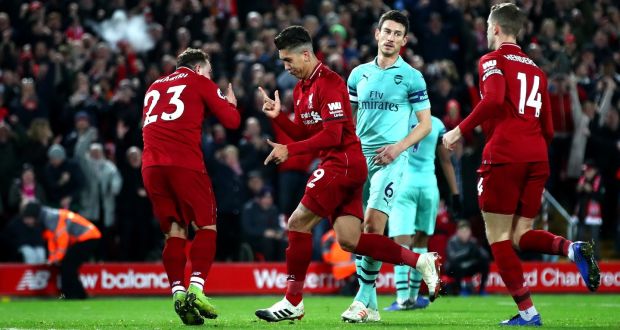 Saturday’s EPL contest on Merseyside saw two of the top-five teams in the league table duke it out. Only one side left with what they wanted in what proved to be a thrilling result for league leaders Liverpool.

Jurgen Klopp’s men used a hat trick from Roberto Firmino to down the Gunners 5-1 and move seven points clear in the league title race. It was a fast start at Anfield with the visitors breaking the deadlock on a counter attack. Ainsley Maitland-Niles got on the end of Alex Iwobi’s low cross and beat Alisson for a 1-0 lead in the 11th minute. Firmino answered back though with his first two goals of the afternoon in a two-minute span.

Sadio Mane added to the first-half advantage in the 32nd minute, before Mohamed Salah slotted in the Reds’ fourth from the penalty spot. Firmino capped off his perfect day with a penalty kick finish in the 65th minute. The forward now holds the record for most goals by a Brazilian in the Premier League, overtaking former teammate Philippe Coutinho.

Elsewhere, Wolverhampton Wanderers handed the shock of the weekend with a two-goal win over Tottenham at Wembley. Manchester United brushed aside Bournemouth at Old Trafford, while Manchester City defeated Southampton. In Serie A play, Juventus head into the winter break with a nine-point lead over Napoli. Carlo Ancelotti’s men held on for a home win over Bologna.

Tottenham Hotspur thought it would be another walk in the park at Wembley with Wolverhampton Wanderers coming to town. However, the visitors used a trio of second-half goals to shock Mauricio Pochettino’s men on home soil. Wolves handed Tottenham a 3-1 defeat after scoring all of their goals in a 15-minute span late in the second half.

Harry Kane’s blistering effort in the 22nd minute was canceled out by Willy Boly’s header in the 72nd minute. A strong half continued for Wolves as Raul Jimenez got on the end of a loose ball and beat Hugo Lloris for his sixth goal of the season. Helder Costa added a third in the 87th minute which boosted the newly promoted club up to seventh in the league table. Spurs are down to third with the shocking result.

Manchester City regained second place in the league table, bouncing back with a 3-1 road victory over Southampton. The result for Pep Guardiola’s men snapped a two-match losing streak which saw the Citizens fall to Crystal Palace and Leicester City.

With the sides level at 1-1, the match flipped on its head before halftime. An own goal from James Ward-Prowse handed Manchester City a 2-1 advantage before Sergio Aguero headed in his 11th goal of the campaign. Pierre-Emile Højberg was sent off late in the second-half for a rash challenge against Fernandinho.

Cristiano Ronaldo carried the load once again for Juventus, scoring a brace in a 2-1 home success over Sampdoria on Saturday.

The Portuguese forward opened things in the second minute, before Fabio Quagliarella equalized in the 33rd minute to draw the teams level. Ronaldo’s 15th goal in all competitions proved to be the difference as he scored from the penalty spot after the hour mark.

The Old Lady heads into a short break with a 17-2-0 record so far in Serie A play while Sampdoria dropped to seventh.

Rangers had to wait six years for their first league win over Glasgow rivals Celtic but Steven Gerrard’s squad tasted victory on Saturday.

A first-half goal from Ryan Jack was all Rangers needed to down Celtic 1-0 at Ibrox Stadium. Jack’s right-footed finish in the 30th minute broke the deadlock and proved to be the winning goal.

Celtic struggled to get much going offensively, recording only one shot on goal. Callum McGregor’s second-half finish found the back of the net, but the Scotsman was whistled off sides which ruled out a possible equalizer. Craig Gordon made six saves as the lone bright spot for Brendan Rodgers’ side.

The teams head into a short winter break level on points at 42 apiece.