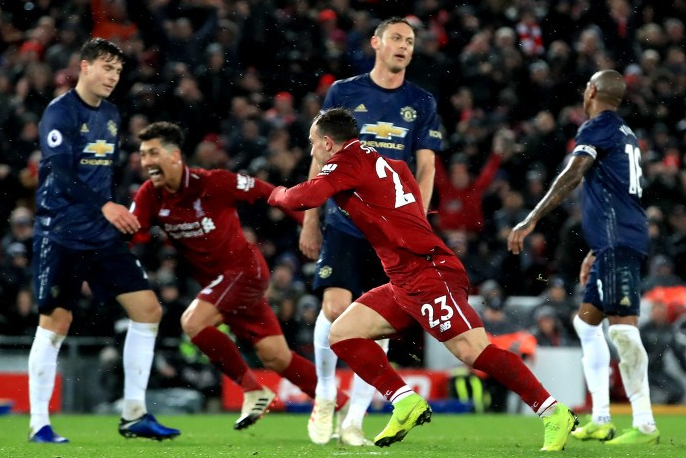 Jurgen Klopp has plenty of attacking options at Liverpool, however it was his bench that lifted his side to a huge win over rivals Manchester United.

Xherdan Shaqiri came off the bench and netted a brace to lift the Reds past their opponents 3-1 at Anfield on Sunday. Three minutes after coming onto the pitch, Shaqiri’s right-footed shot deflected off the crossbar and went in to put Liverpool ahead 2-1. Sadio Mane’s opener in the 24th-minute had Liverpool ahead but Jesse Lingard leveled the match in the 33rd for Jose Mourinho’s side. Not long after giving his side the lead, Shaqiri’s sealed the win as his left-footed shot deflected past David de Gea. The victory now has Liverpool unbeaten in 17-straight in league play, and a point clear of Manchester City. The Red Devils suffered their first league loss to Liverpool since 2014 and are in sixth place.

Elsewhere, Cristiano Ronaldo played the hero for Juventus in Saturday’s Turin Derby while Manchester City defeated Everton at home. Bayern Munich cruised to a league win on the road at Hannover. Real Madrid bounced back from an embarrassing showing midweek to defeat Rayo Vallecano. Nice tied St. Etienne in a dramatic showdown at the Allianz Riviera.

Manchester City bounced back from last weekends defeat to Chelsea by downing Everton 3-1 at home. Gabriel Jesus scored a brace in a 28-minute span to give the Citizens a two-goal advantage after 50 minutes. His first came from a left-footed finish in the 22nd minute before doubling his tally from a header in the 50th minute. Dominic Calvert-Lewin’s flicked header pulled a goal back for Everton but Raheem Sterling came off the bench to score his 10th goal in all competitions to seal the win. Manchester City remains second due to Liverpool’s win while Everton are in eighth.

Real Madrid extended their unbeaten league run to three matches with a 1-0 triumph over Rayo Vallecano on Saturday. Karim Benzema scored the decisive winning goal in the 13th-minute, slotting in Lucas Vazquez’s through ball assist. It was the Frenchman’s 10th goal in all competitions this season. Thibaut Courtois made three saves for Los Blancos as they remained in fourth place. Rayo Vallecano is five points from safety.

Bayern Munich made it six matches unbeaten in all competitions, as they downed Hannover 4-0 away from home. It didn’t take long for the visitors to break the deadlock as Joshua Kimmich scored in the second-minute. David Alaba’s blistering volley extended Bayern’s advantage in the 29th-minute, before the visitors added to their lead after halftime. Serge Gnabry and Robert Lewandowski each bagged goals to seal the dominating performance. Hannover dropped to bottom of the table while Bayern is in third.

Cristiano Ronaldo got his first taste of the Turin Derby on Saturday and left the Olimpico Grande in winning fashion. Ronaldo’s 70th-minute penalty kick was all Max Allegri’s side needed to claim another win this campaign. Salvador Ichazo fouled Mario Mandzukic which allowed the Portuguese forward to score his 12th goal of the season. Mattia Perin made three saves in the clean sheet, which keeps Juve eight points clear at the top of the Serie A summit.

Napoli erased last Tuesday’s Champions League defeat to Liverpool as they defeated Cagliari 1-0. After it looked like both teams would share the spoils at the Sardegna Arena, Napoli used a moment of magic from Arkadiusz Milik. The Polish striker’s wonderfully taken free kick in the 91st-minute, gave Carlo Ancelotti’s men a needed win. Cagliari is in 13th after the loss while Napoli remains a close rival to Juventus.

It was a second half filled with drama at the Allianz Riviera with Nice tying St. Etienne 1-1. Lois Diony’s fifth goal of the season put the visitors ahead in the 53rd-minute after the striker scored from a tough angle. Christophe Herelle’s dismissal in the 58th minute saw Nice reduced to 10-men before Yannis Salibur saw a second yellow card for St. Etienne four minutes later. Wylan Cyprien snatched a draw for Nice as he scored from the penalty spot in the 81st-minute. The teams are a point apart in the standings, with the visitors sitting two places higher.