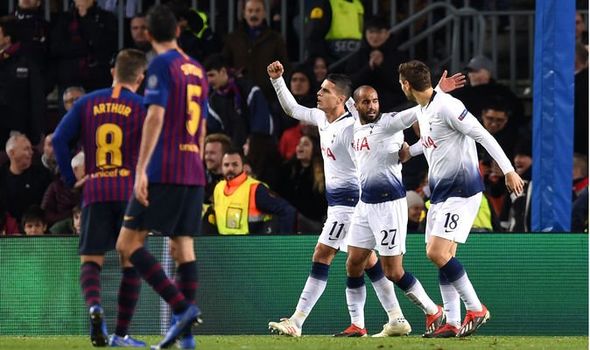 Matchday 6 of the UEFA Champions League began on Tuesday with teams fighting for a place in the knockout stage. In Group B, Tottenham and Inter Milan were both fighting for second place in hopes of joining Barcelona in advancing.

Tottenham captured a 1-1 draw with Barcelona which saw the English side advance while Inter’s draw against PSV mean the Italian club will be playing Europa League action.

Group C also had some of Europe’s biggest clubs fighting for a place in the next stage of the UCL. Once again, it was an English club with Liverpool who advanced while Napoli is set to join Inter in the Europa League. Liverpool will join PSG who topped the group.

Borussia Dortmund beat Monaco in Group A as they topped the league and will be joined in the next round by Atletico Madrid who played a goalless draw with Club Brugge on Tuesday.

Here’s a closer look at some of Tuesday’s UEFA Champions League action:

In a vital game for Tottenham that would go on to decide their future in the UEFA Champions League, they faced a heavily rotated Barcelona. Despite that, it was FC Barcelona who struck first through a wonderful solo run from Ousmane Dembele.

On his way to goal, the French winger beat a pair of Tottenham players before slotting home the game’s opening goal.

Lucas Moura equalized in the 85th minute following a wonderful low driven pass from Harry Kane. The goal would earn Tottenham a vital point which allows them to advance to the knockout stages of the Champions League.

Liverpool was faced with the task of beating Napoli on the final matchday of the group stage. The winner of the match would join PSG in the knockout round as the French club topped the group with a win over FK Crvena Zvezda on Tuesday.

Mohamed Salah broke the deadlock in the 34th minute as his solo effort put Liverpool ahead. After beating Kalidou Koulibaly, Salah poked Liverpool ahead. The win would advance Salah’s side into the next stage of the tournament.

Felipe opened the scoring for Porto heading home an Alex Telles free kick in the 17th minute of play. Porto doubled their lead in the 42nd minute as Moussa Marega converted from the penalty spot.

Sofiane Feghouli also struck from the penalty spot cutting the lead in half before halftime. Sergio Oliveira gave Porto their second two-goal lead of the day when he slotted home a pass from Hernani.

Galatasaray would go on to cut the lead in half yet again through an Eren Derdiyok goal in the 65th minute. Feghouli had a chance to equalize for the Turkish side in the 67th minute from the penalty spot but was denied by the woodwork.