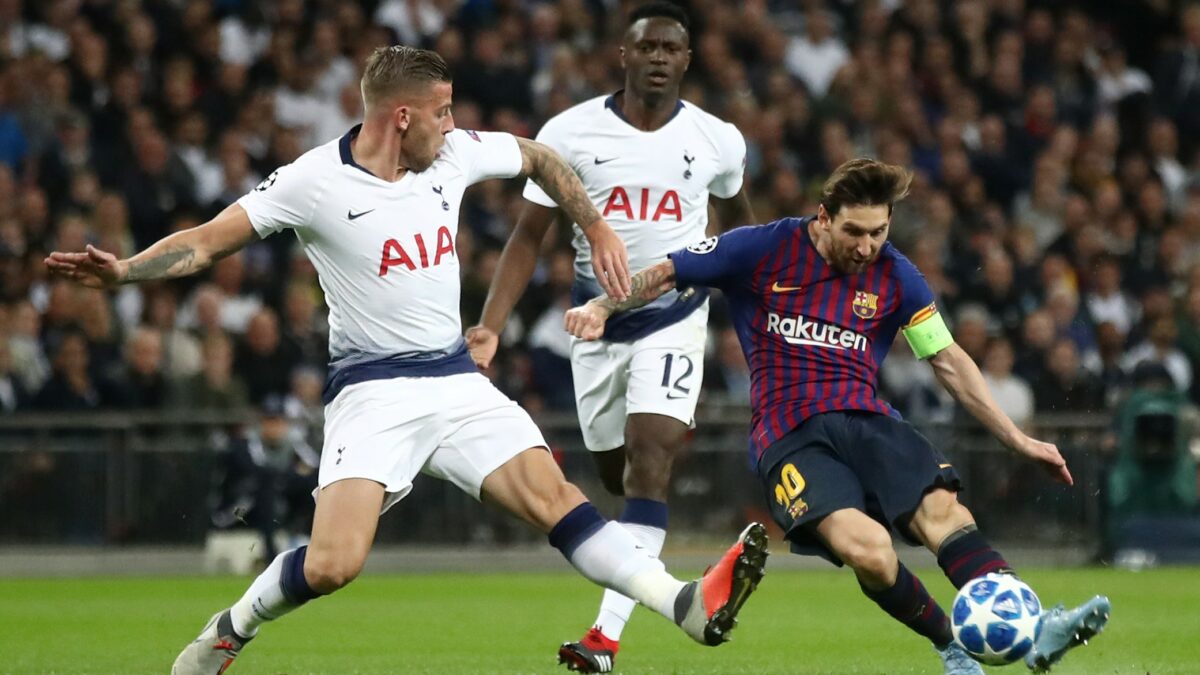 Four places are still up for grabs in the UEFA Champions League Round of 16.

Twelve teams are already guaranteed of spots in the knockout round, and the final four will be determined on Matchday 6.

Barcelona welcomes Tottenham Hotspur to town in the match of the week, knowing a win ends the London club’s hopes of advancing. Ernesto Valverde’s men are favorites to get a result at the Camp Nou against Mauricio Pochettino’s bunch.

Elsewhere, Liverpool needs a victory against Napoli on Tuesday to clinch a berth in the knockout round. PSG is also not guaranteed a Round of 16 place and must win against Crvena Zvezda.

Inter Milan is on the outside looking in as it battles PSV. Manchester United faces a trip to Valencia knowing a win paired with a Juventus defeat to Young Boys will clinch them the top spot in Group H. Lyon and Shakhtar Donetsk will fight for the final place in Group F, with Manchester City already qualified.

Injuries of Note: Serge Aurier and Kieran Trippier are injured, which means Kyle Walker-Peters could get his first start in European play. Juan Foyth is not in Spurs’ UCL roster, but Harry Kane, Erik Lamela, and Christian Eriksen should all return. Luis Suarez has been omitted by Ernesto Valverde, but Arthur Melo is back in contention to start.

Key to the Match: Barcelona will aim to start several first-team players so expect a normal outing from them. Possession is key for the Spanish side, while Tottenham needs to have a go at things. Spurs will try to dominate the offensive chances as they seek a win.

Player to Watch: Harry Kane leads the team with four goals and needs to be on target if Tottenham wants to avoid elimination.

Quote: “Inter has nothing to fear. If they had drawn or won, they would have no problem. We have to look after ourselves. We will go out to win but we respect the competition and we want to win,” Ernesto Valverde said.

Injuries of Note: Dejan Lovren will have a fitness test prior to the match while Joe Gomez is out for six weeks with a head fracture. Adam Lallana returns for Liverpool following a head injury. Vlad Chiriches remains a long-term absentee for Napoli while Simone Verdi is also out.

Key to the Match: Both teams love to play free-flowing football, so the key will be to be solid defensively. Napoli has to deal with the pressure of playing at Anfield so look for it to stack numerous players back. Liverpool will aim to press Napoli and hit them on the counter.

Player to Watch: Mo Salah is coming off a hat trick at the weekend and will be eager to propel Liverpool into the Round of 16. The Egyptian also has two goals in the UCL this campaign.

Quote: “We caused the situation but we still have the chance to go through and that is pretty special,” Jurgen Klopp said. “I’m really looking forward to it.”

Injuries of Note: Casemiro and Nacho remain out for Real Madrid. Alan Dzagoev is still dealing with a thigh problem for the Russian side, while Aleksandr Makarov is dealing with fitness issues. Viktor Vasin is out until at least January.

Key to the Match: Los Blancos have already qualified for the knockout stage but CSKA needs a result to drop into the Europa League. The Russian side needs to pressure Real Madrid while using their speed on the wings offensively.

Player to Watch: Croatian forward Nikola Vlasic has three goals in the Champions League since his move from Everton in the summer. He is in good form this season for CSKA.

Quote: “We played well in the first half and the headwind in the second half complicated us, we did not play well because of that headwind,” Thibaut Courtois said following Real Madrid’s league win on Saturday. “If you want to stay in the league [title race] until the end, you have to win here, so we’re happy for the victory.”

Injuries of Note: Gabriel Paulista is sidelined for Valencia while Jose Gaya is suspended. Kevin Gameiro and Jeison Murillo are doubts due to respective injuries, but Michy Batshuayi, Denis Cheryshev, and Geoffrey Kondogbia are all available. United are short in the backline with Luke Shaw, Victor Lindelöf, Chris Smalling, and Eric Bailly all expected to miss the contest.

Key to the Match: Manchester United will most likely rotate several players with a huge clash against Liverpool coming up this weekend. However, the strategy of playing attacking football will need to be key in order to end the group stage on a high note. Valencia will also rotate with their destiny in the Europa League guaranteed.

Player to Watch: Paul Pogba has two goals and has been a vital part of United’s midfield. Maybe we see him in a higher role this midweek in order to prep for Liverpool.

Here’s all of this weeks UCL action: